In October, 2019, Paul Young and I were fielding a Q&R time at the Grand Embrace retreat in Aldergrove, Canada. It was the first time I’ve been asked for a response to “Jesus-following Atheists” (aka “Christian atheists”). The question was raised by another dear friend, musician Kevin Boese. He’s a huge fan of the Canadian rock band, RUSH, and an avid listener of the Liturgists Podcast, which might be where Kevin first became familiar with this idea of Christian Atheists. I did my best to respond in the moment, but left unsatisfied. I feel that to engage them, I’d want to assume far less about what they believe and practice, and I’d like to ask a lot more questions before venturing too many opinions.

That got me thinking that I could apply my typical formula for healthy interfaith discussion, which includes:

Interfaith dialogue is about bridgebuilding, peacemaking and respect, not colonizing or conversion. Nor does it mean hiding or compromising our own convictions. If done well, we will clarify our convictions and learn from each other, respectfully encountering the other as both stranger and sibling. What follows are the questions (mostly) I will ask next time I have the good luck (a nod to atheism, there?) of chatting with a Jesus-following atheist.

I would start with common ground, which I assume begins with Jesus-following. I don’t want to make too many assumptions, but if they are actually Jesus-followers, I think we’d have a great time sharing (them first):

This list could continue, but I feel there’s another important layer of common ground. There are appropriate orientations of atheism and agnosticism that all Jesus-followers should share! Yes, I said that. These are:

Maturity means holding difference with respect and the ability to honor core beliefs in the other that we cannot embrace ourselves. It means letting go of the drive to convert everyone to my point of view and learning not to isolate from those who disagree. It means not watering down our relationships to common ground, but seeing how our diversity may be a blessing. This requires even more questions and willingness to treasure someone else’s idea of faithfulness and ponder them in our hearts.

I would have a lot of questions for Jesus-following atheists about what limitations they would guard in their understading of Jesus. I would not want to assume, but I would want to develop enough friendship to ask clear questions without turning into into an inquisition, such as:

The point here is not to argue with each other’s convictions or prove we’re right. This is not about apologetics. It’s about understanding first, and then if we’ve listened well, perhaps get a turn to share our convictions. One area that I’d like to explore with atheisms who follow a Jesus ethic is how far they would go in following his teachings.

How might they understand “Take up your cross and follow me?” Though a Hindu, Gandhi was willing to live the Sermon on the Mount all the way to martyrdom. But the Yemenis activists who tried to emulate his peacemaking at the outset of the Arab Spring reverted to violence rather than suffer death for that ethic. What lengths or limits would a Jesus-following atheist see in their Jesus ethic? Something to die for? Is belief in the resurrection necessary to give one’s life in Jesus-following? I know it’s central to my faith but I can imagine different JFAs responding variously.

I’d share my own responses to these, including the challenges. One of these is when I see an atheist following Jesus (intentionally or not) better than I am. I would talk honestly about how Christians often make poor Jesus-followers and invite the JFA to reflect on their observations about that. I might address the irony of how I am often a non-practicing Jesus-follower and ask wryly if they are sometimes a non-practicing atheist? That would be a good time to make amends for the way my movement has misrepresented Jesus and thank them for not allowing that to divert them from Jesus-following.

At the close of the conversation, I would reflect on how the conversation contributes to my journey. And I might ask them if my perspective is of any help to them. And I they would give me a blessing in Jesus’ name, whatever that might mean from their point of view.

As you can see, such a dialogue requires a lot of asking and a lot of listening. And it’s high time we did so. Maybe I’ve read them all wrong! The Christian track record has too often been about what we wanted to impose and say and do to others, with far too much certitude about their need and nearly no awareness of how others’ voices and their humanity could make us better people and better Jesus-followers. 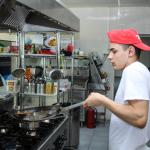 Spit In Your Face
One of the most disgusting bible stories is when Jesus made mud...
view all Progressive Christian blogs
Copyright 2008-2021, Patheos. All rights reserved.