Confessions of a Western Universalist 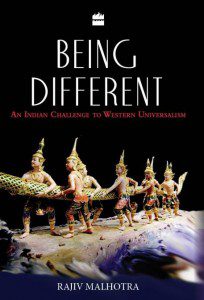 Rajiv Malhotra’s latest book challenges many Western assumptions. He invites his Western readers to see their worldview through the eyes of India. Having read a fair amount of postmodern philosophy, I was sympathetically inclined to his general perspective, but I am willing to confess that at the end of the book I remain, for better or worse, a fairly unreconstructed Western Universalist.

One of my problems with his argument is the way he contrasts the “Judeo-Christian” tradition with what he calls the “dharmic” traditions (Hinduism, Buddhism, Jainism, and Sikhism). He describes the dharmic traditions as based on each individual’s re-experiencing and testing of traditional religious claims in the crucible of their own internal and external firsthand experience. He then characterizes the Judeo-Christian tradition as about each individual overcoming the historical ‘original sin’ of Adam and Eve (5-6).

In contrast, the kind of Christianity I practice and teach involves precisely the sort of pragmatism and cultivation of firsthand experiences with God that he describes as dharmic. And my perspective is far from anomalous. To name only the first two examples that come to mind, see The Naked Now: Learning to See as the Mystics by Richard Rohr, a Christian monk in the Franciscan tradition, and The Wisdom Way of Knowing: Reclaiming An Ancient Tradition to Awaken the Heart by Cynthia Bourgeault, an Episcopal priest. Moreoever, progressive Christianity in general takes individual experience extremely seriously as a criterion for authority and would reject out of hand a view of Adam and Eve as actual historical figures, as opposed to meaningful mythological characters (see my post on “There Was No Historical Adam and Eve“). I could add further that neither Judaism nor Eastern Orthodox Christianity has an understanding of “original sin” in the way that Malhotra describes.

Similarly, when he talks about “Human Access to First Principles,” his championing of a “bottom-up” approach and emphasis on spiritual practices sounds like the entire Emergent Church Movement (62). And, importantly, this movement is not new-fangled. Rather, many scholars would argue that this perspective has always been present in Western Christianity in various forms (see, for example, Diana Butler Bass’ A People’s History of Christianity: The Other Side of the Story). And I couldn’t disagree more that the Nicene Creed — which was written almost three centuries after the life of the historical Jesus — is “the gold standard of belief in Christianity” (343).

Almost at every point, the approach of myself and most of my fellow progressive Christians seems  much more like the so-called “Indian” perspective and much less like the problematic construct of Western religion being criticized. Ironically, Malhotra seemed to be unintentionally inverting and recapitulating the imperialistic gaze he was intending to criticize and deconstruct.

Yes, there is plenty to correct about Western Christianity. There is a sense in which it is problematic that, “In Catholicism a spiritual teacher is formally recognized as a saint only after he or she is dead for a certain number of years, thereby eliminating any threat to institutional authority from the living person.” But the author overreaches when he says that the Church “controls the history and the interpretations of the canonized saint’s teachings, free from any of the risks associated with the subversive teachings of those who practice and advocate director contact with the divine” (94). There is some truth in his critique, but to name only a few examples, John of the Cross, Teresa of Avila, and Ignatius of Loyola are all well-known Roman Catholic saints whose writings strongly advocate direct contact with the divine.

Malhotra occasionally grants that there are exceptions to his rule. For instance, he highlights ‘dharmic’ Judeo-Christian thinkers such as Roger Kamenetz, Dom Bede Griffiths, and Raimondo Panikkar. But I would contend that progressive, ‘dharmic’ religious thought and practice is far more common in the West than Malhotra often acknowledges and may well be even more common in the near future (344).

We Westerners need to listen more to post-colonial voices, but Malhotra too often succeeds merely in knocking down straw men. Despite the vitally important differences in our religious and cultural traditions, we ultimately have far more in common — rooted in our common humanity — than we have to keep us apart.

We are all humans, living on one planet in the far corner of one galaxy, that is only one among more than 100 billion other galaxies. We do interpret our experiences of this one universe through the lens of different cultural-linguistic traditions, but we are still interpreting the same one universe. And in this one universe, I remain for now an unrepentant (Western) Universalist.

Given the unexpected flurry of comments on this book review, as well as the level of passion and persistence from the commenters, I did some research on the author Rajiv Malhotra, which led me the 2007 book The Clash Within: Democracy, Religious Violence, and India’s Future by Martha Nussbaum, an American philosopher I have long admired, who is currently the Ernst Freund Distinguished Service Professor of Law and Ethics at the University of Chicago. She records some disturbing accounts of attacks against the work of other scholars I greatly admire, including Wendy Doniger (the Mircea Eliade Distinguished Service Professor of the History of Religions in the Divinity School at the University of Chicago) and Jeffrey Kripal (the J. Newton Rayzor Chair in Philosophy and Religious Thought at Rice University, where he is also the Chair of the Department of Religious Studies).

The following is one excerpt from Nussbaum’s book:

The chief antagonist behind these attacks is Rajiv Malhotra, a very wealthy man who lives in New Jersey and heads the Inﬁnity Foundation, which has made grants in the area of Hinduism studies. Had Malhotra decided to focus his energies on giving scholarships to students and graduate students in this area, he would greatly have enhanced the proﬁle of Hinduism studies nationally. But in recent years most of his energy has been focused on Internet attacks against Doniger and scholars associated with her, on his website sulekha.com. Malhotra’s voluminous writings show a highly aggressive, threatening personality. His attacks are sarcastic and intemperate. He shows little concern about factual accuracy. Typically he makes no attempt to describe the book or books he attacks in a complete or balanced way; instead, his broadsides are lists of alleged mistakes or distortions, conveying little or no sense of what the book is about and what it argues. Malhotra also has associates, some both more able and more temperate than he (Vishal Agarwal is one of these). But all pursue a common enterprise: the discrediting of American scholars of Hinduism as sex-crazed defamers of sacred traditions. (248)

Although Malhotra’s most recent book (which is reviewed here and which is the only book by him I have read), seems to be of the “more temperate” variety, the history Nussbaum reports confirms my initial impulse to read his works with a skeptical eye.

This book review is a sponsored post that is part of the Roundtable at the Patheos Book Club.

Visit the Book Club website for more free resources related to this book.

March 2, 2012
Against TOMS Shoes: Ethics Are Messy!
Next Post

March 6, 2012 Confronting the Unconscious: From Supernatural to Natural Spirituality
Browse Our Archives
get the latest from
Carl Gregg
Sign up for our newsletter
POPULAR AT PATHEOS More Voices
1