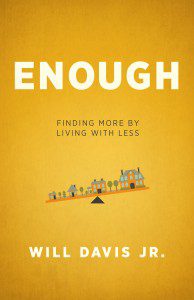 When I was first asked to review this book, my first thought was, “Great. I’ve already read it!” However, I was mistakenly thinking of another good book titled “Enough” by an author whose first name is also “Will”: Enough: Contentment in an Age of Excess by Will Samson (from back in 2009). Reflecting on this duplicate title reminded me of another book I reviewed for Patheos a few months ago with the title “Enough,” also published in 2012 in a revised form: Adam Hamilton’s Enough: Discovering Joy through Simplicity and Generosity . A quick Amazon search revealed even more recently-published books with “Enough” as their title. Enough already with “Enough!”

More seriously, my suspicion — especially given how long the book publication process takes — is that these titles are less likely copying one another and more likely responding to a similar dilemma in Western culture: materialism. And in different ways the three titles named above all recommend a basic Gandhian cure: “Live simply so that others may simply live.” Or as Thoreau said,

Our life is frittered away by detail. Simplify, simplify, simplify! I say, let your affairs be as two or three, and not a hundred or a thousand; instead of a million count half a dozen, and keep your accounts on your thumb-nail.

Having spent the better part of this past week moving from a 3,100 ft² parsonage to an 1,100 ft² apartment, I was particularly primed for Davis’ argument. More importantly, I can honestly report that my wife and I feel that two-thirds less living space feels like a preferable amount: much easier to clean and much more environmentally responsible. Our main qualm is that there’s no great place to store our bikes other than the entry hall, but we can always put them temporarily on the porch when necessary. (But don’t get me wrong; we aren’t looking to sign-up for one of the mini-apartments featured in this past week’s New York Times that are “no bigger than 300 square feet.”)

Although Davis comes from a more conservative position theologically than I do, he has collected some strong stories and practices about how and why one could and should come to realize, as the old adages says, that “Enough is as good as a feast.” For example, the following is a top ten list from Davis of reasons to consider simplifying your life:

In the book, Davis elaborates about his rationale for each of these claims as well as many related ideas.

He also cites convicting statistics such as that,

Thus, while I continue to support the Occupy Movement and its vital critique of the U.S. wealth gap, Davis simultaneously provides an even larger global perspective for consideration. Davis also discusses the negative impact of having “more than enough” (60-63) and the equally important consequences of having “less than enough” (120-121).

Relatedly, I recommend the Sojourners‘ recent blog post, “Will the Real Ms. Middle Class Please Stand Up?” An excerpt:

The Real Middle Class is one layoff, one unexpected hospital visit, one pregnancy away from inching closer to the poverty line—$23,050 for a family of four. Median household family income in the U.S. is $49,445. For a non-family household, it’s $29,730.

July 23, 2012 Decentering Jesus: My Journey to Unitarian Universalism
Recent Comments
0 | Leave a Comment
Browse Our Archives
get the latest from
Carl Gregg
Sign up for our newsletter
POPULAR AT PATHEOS More Voices
1

How to Find Meaning in Life
Carl Gregg
4

How to Find Meaning in Life
The year 2021 has finally arrived! And the beginning of a new...

The most painful religious rituals in the world
https://youtu.be/Z1tuu5cd6VI Religions around the world include rituals that require physical pain....