Water Communion: “A River Runs through It”

Water Communion: “A River Runs through It” September 10, 2012 Carl Gregg

Like many fly fishermen in western Montana where the summer days are almost Arctic in length, I often do not start fishing until the cool of the evening. Then in the Arctic half-light of the canyon, all existence fades to a being with my soul and memories and the sounds of the Big Blackfoot River and a four-count rhythm and the hope that a fish will rise. Eventually, all things merge into one, and a river runs through it. The river was cut by the world’s great flood and runs over rocks from the basement of time. On some of those rocks are timeless raindrops. Under the rocks are the words, and some of the words are theirs. I am haunted by waters.

These closing lines from Norman Maclean’s 1976 novella A River Runs through It are also the closing lines of Robert Redford’s 1992 film with the same title.  Although the film is now twenty years old, if you’ve ever seen the movie or read the book, I suspect those lines 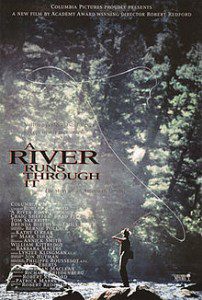 may have sounded familiar to you — even if you haven’t thought of them since you first encountered them. Truly excellent writing is like that: it’s meaningful, memorable, and it sticks with you.

These words are poetic and mystical, gesturing in the same direction as the First Source of our Unitarian Universalist tradition: “Direct experience of that transcending mystery and wonder, affirmed in all cultures, which moves us to a renewal of the spirit and an openness to the forces which create and uphold life.” In this case, the sublime sense of awe and interconnectedness comes from fly fishing. And although I not an accomplished fisherman, much less an accomplished fly fisher, I can relate to a sense of self-transcendent interconnectedness when in nature, especially near water — as, I suspect, can many of you and as have a long line of prominent Unitarian Universalists from Emerson and Thoreau to today.

In those closing lines, the sentence that stands out to me most is the final one: “I am haunted by waters.” For the narrator, a palpable presence of his father and brother lingers around waters, especially around certain rivers where they fished often. But I do not think that that he is primarily haunted by waters in a negative sense. I think that he means he is “haunted by waters” in the sense of being preoccupied with waters, particularly those deeply resonant waters of his childhood.

Reflecting on this final line of A River Runs thought It reminds me of the opening line of Pat Conroy’s 1986 novel The Prince of Tides: “My wound is geography. It is also my anchorage, my port of call.” Conroy is one of my favorite novelists not because he is our most brilliant prose stylist, but because he is a natural storyteller — and because most of his stories revolve around the low-country flavor that characterizes some of the best part of my home state of South Carolina. Just as waters can haunt us, geography can wound us, leaving its mark on us: on our accents, our proclivities, and our perspectives. But Conroy is also right that geography can ground us, give us roots, and a place to which we can return. Geography can be our anchor, our port of call.

Bodies of water, in particular, are like anchors for me. The still waters of a lake compel me to sit and rest a while. The crashing of ocean invites me to walk slowly along the shore. Even the simple, artificial noise of a fountain contemplatively calls me into the present moment. But the same water that invites us to rest before it if present in too much abundance causes a flood or tsunami — or in its absence causes a crop-destroying drought. Waters can be, in turn, haunting and comforting, anchoring and wounding.

In a few moments, you will be invited to come forward and pour a small amount of water — an ounce or two — from a body of water that is special to you into the bowl at the front of the sanctuary. You may also briefly share this water’s significance, but please do be brief out of respect for everyone gathered here, so that as many people as possible who want to share have a chance to share.

The tradition in many Unitarian Universalist congregations, including our own, is for each person to collect an ounce or two of water at some time during each year from a body of water that is particularly meaningful to you for any number of reasons. The combined water represents our shared faith from many different sources. However, if you forgot to bring water or if you, like me, were unfamiliar with the practice of Water Communion until recently (or until just now), don’t worry. You are welcome to pour water from the pitcher and explain what body of water it symbolizes for you.

For me the water I will pour out symbolizes the water than washes up on the western shore of the Chesapeake Bay near the pier in North Beach, Maryland. In truth, I have always preferred the mountains to the beach, which is one of the many reasons I am grateful to live in Frederick; however, for the past two years when Magin and I lived a mile from the bay, those waters were comforting and compelling. I am haunted by those waters, but in a good way. After running, biking, and walking beside the bay so many times, those waters have passed through me. They continue to be part of me. They are now part of my anchorage, my port of call.

I invite you to come forward as you feel led, and share briefly about a source of water that has been meaningful to you in the past year.

September 4, 2012
Is The Book of James Proto-Marxist?
Next Post

September 27, 2012 Native American Spiritualities: Appropriation and Reciprocity
Recent Comments
0 | Leave a Comment
Browse Our Archives
get the latest from
Carl Gregg
Sign up for our newsletter
POPULAR AT PATHEOS More Voices
1