Scientific Rigor and Spiritual Evolution: The Work of Jeffrey Kripal

This post is part of a summer-long Patheos series on 2014 Religious Trends. This week, the focus is the Spirituality Channel on “Is the Veil Thinning? Time, Consciousness, and Spiritual Evolution”

This topic is timely for me because last week, I began teaching a 6-session course in my congregation 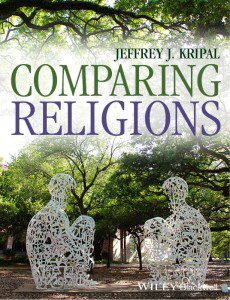 based on Jeffrey Kripal’s new book “Comparing Religions: Coming to Terms.” I have posted about Kripal previously (“Religious Mystic & Rational Humanist: The Mystical Humanism of Jeffrey Kripal”), and myself, as well as many others, see him as an important voice at the intersection of science and spirituality, seeking to articulate ways of being religious in light of twenty-first century knowledge and experience.

To speak briefly about his bona fides, Dr. Kripal has a Ph.D. from the University of Chicago, and is the chair of the Philosophy & Religious Thought department at Rice University. His six previous books were all published by University of Chicago Press. I take the time to name these qualifications because they help support his efforts to bring academic rigor and personal integrity to often controversial and subjective experiences.

One accessible starting point for his work is his 2007 book The Serpent’s Gift: Gnostic Reflections on the Study of Religion (Chicago, 2007). More recently, in 2010 he released the groundbreaking study Authors of the Impossible: The Paranormal and the Sacred (2010). Also fascinating is his foray into pop culture in his 2011 book Mutants and Mystics: Science Fiction, Superhero Comics, and the Paranormal, which was a previous feature in the Patheos Book Club, including a review by me and a reply from Kripal himself in response to all the reviews. For more about the overall trajectory of his work, see his free online essay “Body of Written Work.”

Kripal describes his way of teaching and presenting religious experience as similar to taking the “Red Pill” in the film The Matrix. As Morpheus says to Neo:

This is your last chance. After this, there is no turning back. You take the blue pill — the story ends, you wake up in your bed and believe whatever you want to believe. You take the red pill —you stay in Wonderland and I show you how deep the rabbit-hole goes.

Kripal is very interested in what we can experience firsthand for ourselves — not merely what we have been told secondhand by others — and in what happens when we take a step back to compare and contrast religious experiences from around the world. What do they tell us about ourselves and the human condition? What do they tell us about the sacred?

When I reflect on this week’s Patheos theme of discerning where the evolution of spirituality and the future of religion is headed, the most helpful, challenging, and fascinating guide I have found in recent years is the work of Jeffrey Kripal. I commend it to you, and welcome conversation with others who appreciate his work.

July 31, 2014 Why Universalism? "Loving the Hell Out of the World?"
Recent Comments
0 | Leave a Comment
"Nice article. I am a fan of the Harris duo and this topic. Why is ..."
Jesse Meditation, Neuroscience, Psychedelics: Who Am I? ..."
"When challenged by some as to what makes me think that I, a woman, can ..."
Cheryel “Your Daughters Shall Prophecy”: Fulfilling the ..."
"Yes, those who prefer to dream of a better world rather than accept the mess ..."
Barros Serrano Another World Is Possible: What Does ..."
""Wage labor is the bourgeois compromise between freedom and slavery."Modern "capitalism" (to use Marx's term ..."
Barros Serrano Alienated Labor, B.S. Jobs, & the ..."
Browse Our Archives
get the latest from
Carl Gregg
Sign up for our newsletter
POPULAR AT PATHEOS More Voices
1