“Liberal Religion in the Public Square”

Each year the Unitarian Universalist Association chooses one book as a “Common Read,” and encourages all UUs to read, discuss, and consider action in light of the contents. Previous Common Reads have included:

If any of those titles pique your interest, I highly recommend any or all of them. 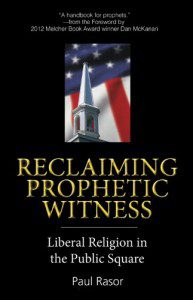 This year’s Common Read is Reclaiming Prophetic Witness: Liberal Religion in the Public Square by a UU minister named Paul Rasor, who is currently the director of the Center for the Study of Religious Freedom at Virginia Wesleyan College. And if you are intrigued by Rasor’s title, one potential piece of good news is that his book is quite short, weighing in at around 100 pages.

A major goal of the book is to challenge religious progressives to reflect on the ways our values do (or could) support our activism to help create a more just, equitable, and peaceful world. But when I think about the title “Reclaiming Prophetic Witness,” what first comes to mind for me is the biblical tradition of the Hebrew prophets. However, the theologically conservative Christian congregation of my childhood taught me to view the Hebrew prophets in a very different way than Rasor has in mind. They taught me to read the “Old Testament” selectively for the ways these books could be seen as predicting events centuries into the future in the life of Jesus.

In contrast, when I took an undergraduate class on the Hebrew prophets and began reading those books from the perspective of their original context, it became clear that most of the biblical prophets were concerned not with the distant future, but with social injustice and corruption in their own day — and that they would be perplexed and shocked if they could somehow have known how Christians would come to read their texts centuries later. As the Jewish literary critic Harold Bloom has said regarding the Christian use of Jewish scripture, “Christianity stole our watch and has spent 2,000 years telling us what time it is.”

There is a lot more to say about the interpretation of the Hebrew Scriptures, but for now let me give just two pivotal examples that were highly influential on twentieth-century social prophets such as Rabbi Abraham Joshua Hershel and The Rev. Dr. Martin Luther King, Jr.

First, from the fifth chapter of the prophet Amos, speaking on behalf of the divine, Amos says to the people:

“21 I hate, I despise your festivals, and I take no delight in your solemn assemblies. 22 Even though you offer me your burnt offerings and grain offerings, I will not accept them; and the offerings of well-being of your fatted animals I will not look upon. 23 Take away from me the noise of your songs; I will not listen to the melody of your harps. 24 But let justice roll down like waters, and righteousness like an ever-flowing stream.”

“6 …Shall I come before [God] with burnt offerings, with calves a year old? 7 Will [God] be pleased with thousands of rams, with ten thousands of rivers of oil? Shall I give my firstborn for my transgression, the fruit of my body for the sin of my soul?” “[God] has told you, O mortal, what is good; and what [is required] of you but to do justice, and to love kindness, and to walk humbly with your God?”

The biblical prophets felt that God wanted the world to be less corrupt and more just, peaceful, and equitable — and they lived out this sacred calling often in very startling, disturbing, and intimidating ways.

But we don’t live in Israel during the eighth-century B.C.E., but instead in the West in the early twenty-first century — on the other side of the Scientific Revolution: after the discoveries of Copernicus, Darwin, Einstein, Hubble and many others. So what might it mean to “reclaim prophetic witness” today? What are our sacred values that can inspire us to work for a more peaceful and just world — to pick up and extend the work of the prophets who have come before us and on whose shoulders we stand?

The late American Pragmatic philosopher Richard Rorty wrote about what it might look like to see ourselves as part of a long line of prophetic witness. Limiting our focus for now to only the past few centuries here in the U.S., Rorty writes about the possibility of increasing numbers of people

acquiring an image of [ourselves] as heirs to a tradition of increasing liberty and rising hope…. wanting [ourselves and our] children to come to think of [ourselves] as proud and loyal citizens of a country that, slowly and painfully, threw off a foreign yoke, freed its slaves, enfranchised its women, restrained its robber barons and licensed its trade unions, liberalized its religious practices, broadened its…moral tolerance, and built colleges in which [increasing percentages] of its population could enroll. A country that numbered Jefferson, Thoreau, Susan B. Anthony, Eugene Debs…Rosa Parks, and James Baldwin among its citizens.

Along these lines, Rasor is inviting us to take a step back and reflect on the core, sacred values that motivated our forebears to work for social change in the hope that explicitly naming those sacred values might ennoble, enliven, and embolden us to, in Dr. King’s words, build the Beloved Community.

For Rasor, such sacred values are “liberal religious values.” And before I proceed, allow me to address the confusion that can arise from Rasor’s subtitle “Liberal Religion in the Public Square.” He does not mean that being a UU necessitates being a Democrat any more than being a Christian necessitates being a Republican. Instead, it is very much possible — and has many times been the case historically — that one can be a Religious Liberal and a Political Conservative or vice-versa.

In contrast to this “Big Tent” position, conventional wisdom today too often wrongly holds that all religious people are political, social, and economic conservatives — overemphasizing the Religious Right and ignoring the historic influence of the Religious Left from Women’s Suffrage to Civil Rights, and more. And surveying our landscape today, Rasor highlights:

And one major challenge of Rasor’s book is to consider what alternative convictions religious progressives might bring to the public square.

As a starting point, Rasor offers the following list of  “Core Theological Principles of Religious Liberals” for consideration:

To give just a few examples of what the practical implications could be, in a review of recent resolutions passed by the UUA at recent annual General Assemblies, Rasor notes that, “Most read like political policy platforms rather than statements of religious conviction; fewer than 20 percent mentioned Unitarian Universalist’s core Principles, and then only in passing among the introductory ‘whereas’ clauses” (27).

But what if we introduced our religious convictions — our core, sacred values — into the equation? To give just three examples,

Those are the sorts of sentiments that Rasor is trying to tap into when he talks about “Reclaiming Prophetic Witness: Liberal Religion in the Public Square.”

And with all this being said, allow me to be clear as well that by no means am I trying to undermine the First Amendment protection against the “establishment of religion.” At the same time, the First Amendment also prohibits interference with the “free exercise” of religion. And regarding the intersection of religion and state, perhaps Dr. King said it best in his book The Strength to Love:

The church must be reminded that it is not the master or the servant of the state, but rather the conscience of the state. It must be the guide and the critic of the state, and never its tool. If the church does not recapture its prophetic zeal, it will become an irrelevant social club without moral or spiritual authority.

For now, I will conclude with these words from the forward to Rasor’s book that remind us of the many different forms of prophetic witness needed in our world today:

In times like these, prophets must speak loudly, clearly, and with many voices.

We need prophets of economics to explain the cascading consequences of inequality and envision workplace democracy and socially responsible investment.

We need prophets of science who can track the steady increase in global temperatures, chart its implications, and convey the urgency of those implications to policymakers.

We need prophets of the arts to express their vision for social renewal in stirring songs and inspiring stories.

We need prophets who testify to the human costs of inequality and oppression, and tell their stories of how individuals and communities are fighting back.

And…we need prophets of faith to bring the rich resources of religion into the struggle, making ancient traditions new by applying them to today’s challenges.

The question then turns to each of us to look inside ourselves — and around at our occupations and connections — and ask: How do I feel called to speak or act prophetically in my particular spheres of influence?

June 9, 2015 Practicing Forgiveness
Recent Comments
0 | Leave a Comment
Browse Our Archives
get the latest from
Carl Gregg
Sign up for our newsletter
POPULAR AT PATHEOS More Voices
1