“What do you want to be when you grow up?” I’ve responded to that question many different ways over the year. As I approach middle age, I’m beginning to consider that one thing I might want to become one day is an elder — with the connotation not only of being “older than I once was,” but also of being wiser. Our invitation is to move from “Age-ing to Sage-ing.”

Have you ever been in the middle of a meeting — especially a heated debate — and heard an elder speak? In the midst of sparks flying and wounded egos battling, I’ve seen elders speak a word of wisdom — born out of a lifetime of experience — that suddenly calmed the storm of debate and allowed the community to move forward together. Elders serve as a ballast: the heavy material placed low in the vessel that gives it stability. Part of what gives an elder gravitas is the perception that they are speaking authentically, with the interest of the whole community at heart — without an ulterior motive.

Wisdom does not come easily. As a mentor once told me, “Maturity does not come automatically with age. Rather, it demands ongoing and ardent work on the part of the individual.” That same mentor recommended an excellent book for which I’ve always been grateful: the 1961 book On Becoming a Person by psychologist Carl Rogers (1902 – 1987). I invite you to hear just one excerpt about the “General Direction” of moving toward maturity—toward becoming an elder, toward becoming wise:

By embracing who we are, we are able to be in this world with increasing authenticity and wisdom.

This idea of seeking wisdom appeals to me, and is part of why I was a double major in college in religion and philosophy. The word philosophy (philia – sophia) literally means “love of wisdom.” A similar love of wisdom is part of what drew me to Unitarian Universalism: permission not to limit myself to only one religious tradition, but instead encouragement to draw from the best of the world’s religions, the best of modern science, as well as my own direct experience — for whatever offers us wisdom for living in our twenty-first century globalized pluralistic postmodern world.

A related love of wisdom — drawn from a wide variety of sources — led to inviting Krista Tippet, host of the popular public 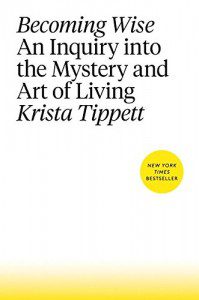 radio show On Being, to deliver this year’s Ware Lecture at UU General Assembly. Tippet’s new book is titled Becoming Wise: An Inquiry into the Mystery and Art of Living. Regarding her own journey toward becoming wiser, Tippet writes, “I’m a person who listens for a living. I listen for wisdom, and beauty, and for voices not shouting to be heard” (2).

In my training to become a spiritual director, I was taught that one definition of spiritual direction is “listening someone into speech.” Have you ever experienced someone being so fully present to you — so deeply listening to you —  that you found yourself articulating new insights about yourself and the world? When was the last time you set aside your own agenda — thinking about what you want to say next — to listen to someone else that deeply, to listen someone into speech?

Tippet describes her approach to interviewing as “generous listening.”  What might we learn from Tippet about how we can listen more generously to sources of wisdom in our world. She writes:

Generous listening is powered by curiosity…. It involves a kind of vulnerability — a willingness to be surprised, to let go of assumptions and take in ambiguity. The listener wants to understand the humanity behind the words of the other, and patiently summons one’s own best self and one’s own best words and questions. (29)

Given all the tragic events in recent weeks and months, what occasions might you have in the coming days to offer generous listening to others? How might we also cultivate more opportunities in which all of us might experience the gift of being fully heard?

We must also continue to ask ourselves, “To whom are we listening?” One of the many reasons that the #BlackLivesMatter movement is so important is that in the founding document of our country, in article I., section 2 of our Constitution, our leaders counted black lives as only “three-fifths” of a person. That law was not changed until 1868 with the Fourteenth Amendment. Even then, women were not allowed to vote until 1920 with the passage of the Nineteenth Amendment. We need increasingly to listen generously to women, to people of color, and to other historically oppressed groups if we are to have any hope of dismantling the systems of oppression that are imprisoning us all in the descending cycle of violence in which we are all caught.

Consider these statistics reported recently in The Washington Post:

To add some data to these perceptions, a recently-completed three-year study reported in The New York Times, showed that, “although officers employ force in less than 2 percent of all police-civilian interactions, the use of police force is disproportionately high for African-Americans — more than three times greater than for whites.” We need to listen generously to one another across cultural divides because we experience the world differently.

Along these lines, I was heartened to read the many dissents this term written by the relatively-new Supreme Court Justice Sonya Sotomayer, which showed her deep engagement with both the history of the African-American experience in this country and her awareness of the current #BlackLivesMatter movement. Among the many sources quoted in her dissents include W. E. B. Du Bois’s The Souls of Black Folk, James Baldwin’s The Fire Next Time, Michelle Alexander’s The New Jim Crow, and Ta-Nehisi Coates’s Between the World and Me.

If you are interested in a deeper understanding of the #BlackLivesMatter movement, a good starting point might be those books that Justice Sotomayer chose to listen generously to as sources of wisdom for our country’s present and future. And the most accessible way to read them might be in reverse chronological order:

We know that race is a social construction because science has shown us that “All humans are 99.9 percent identical” at the DNA level: “Race is a social concept, not a scientific one…. We all evolved in the last 100,000 years from the same small number of tribes that migrated out of Africa and colonized the world….” There is only one race — the human race. But despite what science tells us about the universal kinship of all human beings, there are powerful forces in our world perpetuating the illusion that racial differences are more than skin deep. And given that history, it remains vital to affirm that #BlackLivesMatter.

For now, I’ll leave you with one final quote from Krista Tippet’s book. She reminded me of an important quote from the twentieth-century theologian Dietrich Bonhoeffer regarding the practice of listening generously or ungenerously: “The person who’s in love with their vision of community will destroy community. But the person who loves the people around them will create community everywhere they go.” In how we treat ourselves and others, may we each contribute toward the building of beloved community.

September 6, 2016 People, Planet, Profit: Money Is Not the Only Bottom Line
Recent Comments
0 | Leave a Comment
""Next let’s consider the similarly wide range of American religious views about reproductive justice." You ..."
Lisa deGruyter “How Rights Went Wrong”: On the ..."
""
Alhazred Building a New Mythology
"Me too they are soooo perfectT.E1269.US\f9352CE"
Kuqryku An Afro-Indigenous History of the US ..."
""
Blissfull Wulf “Imagining How a More Just World ..."
Browse Our Archives
Related posts from Carl Gregg 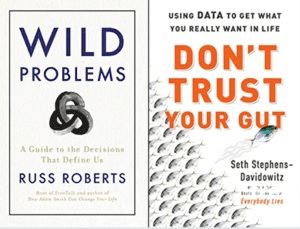