What Does It Mean that We Are Sapiens? Reflections on Darwin Day

What Does It Mean that We Are Sapiens? Reflections on Darwin Day February 15, 2017 Carl Gregg

This past Sunday was Charles Darwin’s birthday. He was born a little more than two hundred years ago on February 12, 1809. (Interestingly, Abraham Lincoln also has the same birthday and birth year.) In recent years, Darwin’s birthday has become known as International Darwin Day, an annual opportunity to celebrate the principles of “perpetual curiosity, scientific thinking, and hunger for truth” that guided his life. A tragedy of the ongoing “Creationism vs. Evolution” debate is that coming to terms with Darwin’s theories of evolution, natural selection, and common descent were among the greatest intellectual challenges of the late nineteenth and early twentieth century. But we live in the early twenty-first century, long past the point at which Evolution became settled science.

Some of the paradigm-shifting implications of Darwin’s findings are that we humans are not a little lower than the angels, but rather “a little higher than the apes” with whom we share a common ancestor. We now know that at the DNA level there is only a 1.23 percent difference between humans and chimpanzees. We humans are not a uniquely special creation. Rather, we are Homo sapiens sapiens — a subspecies within the larger Animal Kingdom. We are deeply interconnected and interdependent with the ecosystems and other forms of life on this Earth. 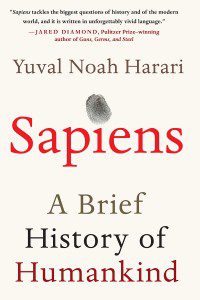 This year Darwin Day inspired me to finally get around to reading the bestselling book Sapiens: A Brief History Humankind published in 2015 by Yuval Harari, a professor of world history. And I would like  to reflect some on what it means to accept our place in the universe as merely one species among many — as well as the consequences that follow when we deny our place in the grand scheme of things.

Consider this paragraph from the beginning of Sapiens:

On a hike in East Africa 2 million years ago, you might well have encountered a familiar cast of characters: anxious mothers cuddling their babies and clutches of carefree children playing in the mud; temperamental youths chafing against the dictates of society and weary elders who just wanted to be left in peace; chest-thumping machos trying to impress the local beauty and wise old matriarchs who had already seen it all. These archaic humans loved, played, formed close friendships and competed for status and power — but so did chimpanzees, baboons, and elephants. There was nothing special about humans. Nobody, least of all humans themselves had any inkling that their descendants would one day walk on the moon, split the atom, fathom the genetic code and write history books. The most important thing to know about prehistoric humans is that they were insignificant animals with no more impact on their environment than gorillas, fireflies, or jellyfish. (4)

A mere 150,000 years ago, there were only about one million humans alive on planet earth. Today the world population of humans is more than 7.3 billion, with an overall growth rate of more than one new human being added to the total each second! And far from the negligible impact our one million ancestors had on this planet, since the nineteenth-century Industrial Revolution, human-created climate change from the high-impact lifestyles of the increasing numbers of us is hurtling us toward a potential sixth mass extinction here on Earth (13).

Today we Homo sapiens sapiens are massively dominant on this planet, but that is a relatively recent development in the 4.5 billion year old history of Earth. Many of you can likely recall seeing t-shirts (or similar cartoon depictions of evolution) with a line moving from left to right of an ape, then an ape standing upright, then a caveman, then a more evolved caveman, progressing all the way up to a modern human. But that episodic, linear progression is misleading. The word human means “an animal belong to the genus Homo.” And “humans first evolved in East Africa about 2.5 million years ago from an earlier genus of apes called Australopithecus. And from about 2 million years ago until around 10,000 years ago, at least six different humans species lived together at the same time — just as today there are many different species of cats, dogs, bears, and other animals” (5-8). Evolution is messy and complicated — just like life!

We humans used to be in the middle of the food chain: we hunted and ate smaller creatures — and larger creatures sometimes hunted and ate us! However, through major innovations like the domestication of fire and the increasingly sophisticated communication potential of human language, we jumped to the top of the food chain with shocking speed — especially from the slow-moving perspective of evolution. Harari writes:

Other animals at the top of the pyramid, such as lions and sharks, evolved into that position very gradually, over millions of years. This enabled the ecosystem to develop checks and balances that prevented lions and sharks from wreaking too much havoc. As lions became deadlier, so gazelles evolved to run faster, hyenas to cooperate better, and rhinoceroses to be more bad tempered. In contrast, humankind ascended to the top so quickly that the ecosystem was not given time to adjust. Moreover, [we] humans failed to adjust. Most top predators of the planet are majestic creatures. Millions of years of dominion have filled them with self-confidence. [We] by contrast are more like a banana republic dictator. Having so recently been one of the underdogs of the savannah, we are full of fear and anxieties over our position, which makes us doubly cruel and dangerous. (11-12)

We ignore the perspective of science at our peril. As the saying goes, “The first step is admitting you have a problem!” Our challenge is to integrate the perspectives of spirituality and science through what my own tradition of Unitarian Universalism calls “the free and responsible search for truth and meaning.”

In a post tomorrow on “What If We Rewrote the Declaration of Independence from a Darwinian Perspective?” I will share a few more reflections inspired by the book Sapiens, shifting my focus from genes to memes.

February 10, 2017
How to Cultivate a Culture of Dignity
Next Post

February 16, 2017 What If Darwin Rewrote the Declaration of Independence?
Recent Comments
0 | Leave a Comment
Browse Our Archives
get the latest from
Carl Gregg
Sign up for our newsletter
POPULAR AT PATHEOS More Voices
1

More Voices
The Stories We Tell Matter: On the 100th...
Carl Gregg