How to Cultivate a Culture of Dignity

How to Cultivate a Culture of Dignity February 10, 2017 Carl Gregg

The opening lines of the Roman Catholic Catechism affirm that, “The dignity of man rests above all on the fact that he is called to communion with God.” The First Principle of Unitarian Universalism makes an even more radical claim for “the inherent worth and dignity of every person,” irrespective of anything else.

In 1961, when the American Unitarian Association consolidated with the Universalist Church of America to form the Unitarian Universalist Association, we originally had Six Principles that were similar, but in a different order that the ones we know today. The Principles were revised in 1985, in particular to make them more gender inclusive. And in 1961 when the UUA affirmed “the supreme worth of every human personality, the dignity of man,” a major influence on that choice was the 1948 United Nations’s “Universal Declaration of Human Rights.” The very first line of its preamble recognizes that, “the inherent dignity and the equal and inalienable rights of all members of the human family is the foundation of freedom, justice and peace in the world….” Likewise, following the preamble, the very first sentence of Article I says, “All human beings are born free and equal in dignity and rights.” The writing and passage of a “Universal Declaration of Human Rights,”a direct result of the horrors of World War II, which ended in 1945, was a terrifying reminder of our capacity as a species to violate the dignity of our fellow human beings in horrific ways.

Respect and support for human dignity are also foundational to the Geneva Convention, which was passed the next year in 1949, and reminds us that 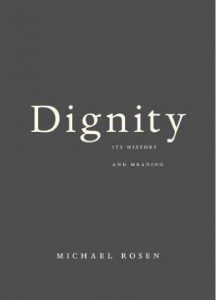 “all human beings” and “every person” really means everyone, even prisoners of war. The Geneva Convention prohibits both “cruel treatment and torture” as well as “outrages upon personal dignity, in particular, humiliating and degrading treatment” such as the now infamous Abu Ghraib prison scandal. (The exception to “every person” is active combatants.) This background is one reason that human rights organizations such as the UU Service Committee have spoken out against torture — including when torture is veiled behind Orwellian double-speak and called “enhanced interrogation techniques.” When we violate one another’s dignity, we risk devolving into a world of violence, cruelty, and “might makes right.” As Harvard professor Michael Rosen said in his short but important 2012 book Dignity: Its History and Meaning, “the barriers that separate…modern liberal democracy from the barbarism and atrocity that disfigured the twentieth century (and show every sign of counting through the twenty-first) are very, very fragile” (159).

Rosen also fascinatingly traces the ways that what is seen to follow from the starting point of human dignity is very different, depending on one’s perspective. For example:

Rosen summarizes these two sides ends of the spectrum:

For [many religious conservatives], human dignity gives life a value that may properly override the choices made by the individual living it. On the other hand, for liberals in the United States in particular, dignity is identified with autonomy in the sense of individuals’ right to choose for themselves how to live (and die). (126)

Some of you may recall echoes of my Election post on the differences between Edmund Burke and Thomas Paine as paradigmatic of our contemporary left and right. Perhaps the most important point that is behind both of those sides of the coin is that we as a species are increasingly choosing to universalize dignity to all human beings, which was by no means an inevitable choice then or now (8). Historically, dignity has much more often been the privilege of the aristocratic few rather than a characteristic of every human being (38-39).

In that spirit, allow me to bring one more 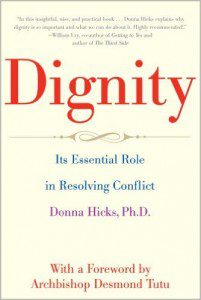 book into the conversation: Dr. Donna Hicks’ book with Yale University Press, Dignity: Its Essential Role in Resolving Conflict. Dr. Hicks has been working with international conflict resolution for decades, and the forward to her book is written by Archbishop Emeritus Desmond Tutu. She has seen many global conflicts begin to be transformed when past indignities are named aloud, and when both parties begin to again see the other side as no longer subhuman, but instead, as possessing worth and dignity. She writes that her essential message is simple: “Demonstrate the care and attention for yourself and  others than anything of value deserves…. Don’t miss an opportunity to exert the power you have to remind others of who they are: invaluable, priceless, and irreplaceable. Remind yourself, too” (3). Indeed, one of the most powerful lines in her book is a testimony from a Latin American political official who said, regarding Hicks’ Dignity Model of negotiations: “Not only did you help the relationships in this room — I think you also saved my marriage” (2)

From a UU perspective, the challenge of these two books is to live more fully into our First Principle, what Donna Hicks calls creating “a ‘culture of dignity’ in which everyone would be aware of how easy it is to inflict painful wounds on one anothers’s dignity”—and accordingly, to “learn how to extend dignity to one another and create an environment in which people look forward to being together because they feel valued” (16). Related to the need to be intentional about creating a “culture of dignity,” consider just one study of 2,500 people imprisoned for murder. “When asked why they felt compelled to kill, the majority of the inmates responded, ‘Because I felt disrespected’” (38). Conversely, Nelson Mandela, although not an exemplar of nonviolence in his early days, became a stunning example of sustaining a culture of dignity even in some of the worst circumstances. After being wrongfully imprisoned for more than twenty-seven years by the apartheid government, Mandela said a day after his release in 1990, “I knew that people expected me to harbor anger toward whites. But I had none. In prison, my anger toward whites decreased, but my hatred for the system grew. I wanted South Africa to see that I loved even my enemies while I hated the system that turned us against one another…. Whites are fellow South Africans and we want them to feel safe and to know that we appreciate the contribution that they have made toward the development of this country” (75). What a powerful testimony of the inherent worth and dignity of every person — even the many persons on both sides of that struggle who committed terrible injustices.

What, then, might it look like in more everyday circumstances to help create a culture of dignity? One crucial piece of advice Hicks gives is, “Don’t take the bait. Don’t let the bad behavior of others determine your own. Restraint is the better part of dignity. Don’t justify getting even. Do not do unto others as they do unto you if it will cause harm” (93). But when conflicts inevitably happen, the following recommendations summarize her framework for reconciliation—one that honors each person’s dignity:

First, both parties must agree that sitting down together is worthy of their time and attention. Isn’t it much more common to withdraw from those with whom we have been in conflict and refuse to talk to them?

Second, listen without interrupting or challenging each other’s story…. Listen to seek understanding. Isn’t it much more common for us to listen to our adversaries only to one-up them or to prepare our attack on what they have said?

Third, acknowledge and recognize what the other has been through. Isn’t it much more common to stare without expression at the person we have injured in the heat of a conflict and feel defensive or justified?

Fourth, honor and acknowledge each other’s integrity, and in so doing, create a mutual bond. (185)

And so, in the days to come, I invite you to experiment with what it feels like with the many different people you encounter to hear echoing in your ear: “the inherent worth and dignity of every person,” which includes both yourself and the other facing you.

To close with a blessing from Desmond Tutu, may we all become “agents of dignity” — of the inherent worth and dignity of every person: “accept it in yourself, discover and encourage it in others, and peace may just be possible” (x).

February 7, 2017
The Great End of Religious Instruction: The Legacy of William Ellery Channing
Next Post