The Great End of Religious Instruction: The Legacy of William Ellery Channing

I first heard of Unitarian Universalism in college. Our UU student group was called the Channing Circle. But I had no idea who Channing was. Less transparently, I came to discover that some of the oldest and largest UU congregations also owe their names to Channing. All Souls Church Unitarian in Washington, D.C and the Unitarian Church of All Souls in New York City (both of which are close to a thousand members each) as well as the 1,800-member All Souls Unitarian Church in Tulsa, Oklahoma — that’s right: the largest UU congregation in the world is in Tulsa, Oklahoma! — all three of those “All Souls” UU congregations owe their name to a famous passage from William Ellery Channing in which he said: “I am a living member of the great Family of All Souls; and I cannot improve or suffer myself, without diffusing good or evil around me through an ever-enlarging sphere” (17). 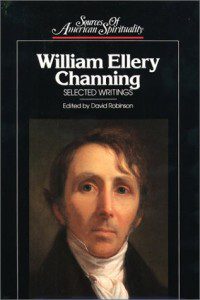 To begin to tell you some about the author of that phrase, Channing was born in 1780, and died at age 62 in 1842. To set him in context, keep in mind that Ralph Waldo Emerson’s breakout book Nature was published in 1836, almost at the end of Channing’s life. Channing loomed large when Emerson was coming into his own, and Emerson called him “our bishop” as a sign of the esteem in which Channing was held (Delbanco ix). Emerson wrote further that, “Dr. Channing, whilst he lived, was the star of the American church, and we then thought, if we do not still think, that he left no successor in the pulpit” (Selected Writings 4).

And one among many reasons that Channing continues to be an important figure for us to consider today is that, whereas Emerson left his Unitarian pulpit for the lecture circuit after only a short time, and whereas his fellow Transcendentalist minister George Ripley left his Unitarian congregation for the utopian community at Brook Farm, Channing stayed for almost four decades (1803-1842) in the same Unitarian congregation, Federal Street Church in Boston (now known as Arlington Street Church). He was twenty-three when Federal Street ordained and installed him, and he stayed for the rest of his life (55).

If you are interested in learning more about Channing, perhaps the best starting place is a biography written by Jack Mendelsohn, one of Channing’s mid-twentieth-century successors in our Arlington Street pulpit. Mendelsohn subtitled his biography of Channing The Reluctant Radical because, unlike the more naturally radical Theodore Parker, Channing’s inclinations were for moderation. But starting in 1831 and for the next and final decade of his life, Channing finally began to speak and publish with increasing frankness and boldness against slavery, the great moral evil of his time. But he retained hope that slavery might be ended without war.

And although Channing is not always remembered today, Mendelssohn writes that:

In 1880, the one-hundredth anniversary of Channing’s birth, elaborate public celebrations sprang up throughout the United States, in Great Britain, Ireland, and Europe. Enthusiastic tributes flowed from Asia. [The minister at the time of the Unitarian Church of All Souls in New York City said] “Of Channing, we do not say that he was, but he is, a burning and shining light; and the season has not even reached its meridian, when the Church and the world are willing to rejoice in his light.” (5)

Perhaps surprising, given his influence, Channing stood only five-feet tall, weighed only about 100 pounds, and was sickly and weak most of his life (Mendelsohn 6).

Along these lines, one of the powerful recurring themes in UU history is of individuals studying the Bible (and other scriptures) for themselves, choosing to honor the truth of their reason and direct experience, and liberating themselves from oppressive religious traditions. But another more disturbing theme from our history is that many UU leaders from our past, including Channing and Theodore Parker, ruined their health through overwork. (Of course, workaholism is widespread phenomenon, not unique to Unitarian Universalism.)

Channing had an almost monk-like ascetic side, and pushed himself far too hard as a young minister. He would regularly stay up for hours past midnight reading by candlelight. He often slept “on the hard floor without blankets,” and he did not eat enough, leaving himself frequently malnourished. Using today’s medical insights, one educated guess is that Channing was sickly for the rest of his life because at the beginning of his career, “the anxiety, stress, and exhaustion …[took a] terrible toll [on his] adrenal glands,” weakening his body permanently (Mendelsohn 44). The cautionary tale here is similar to my previous post about Ariana Huffington’s “wake up call” after passing out from overwork. Being famous and successful, or having the potential to be, will not protect you from the consequences of neglecting self-care. Eating well, exercising, meditating, getting adequate rest and vacation is vitally important for all of us. Channing’s story is a reminder to take care of yourself for the long run.

We are also rapidly approaching May 5, 2019, which will be the 200th anniversary of Channing delivering what may be the most significant, well-known, and influential sermon in Unitarian history — a sermon he delivered at the ordination of the new Unitarian minister of the congregation we know today as First Unitarian Church of Baltimore, Maryland. (The year after that, 2020 will be the 250th anniversary of John Murray’s first Universalist sermon, delivered on the Jersey Shore.)

Although Unitarian roots go back at least to the 1500s in Europe, it is important not to project all our contemporary perspectives onto our ancestors. To offer an example from our past, Faustus Socinus in the 1500s and Joseph Priestley in the 1700s did teach that Jesus was fully human (just like the rest of us), but many others, including William Ellery Channing, while rejecting the Trinity as irrational and unscriptural, still continued to think that both Jesus and Christianity were special and superior and uniquely important in history. Consider this passage from Channing: “Jesus Christ is more than a man…existed before the world…literally came from heaven to save our race…still acts for our benefit, and is our intercessor with the Father” (Selected Writings 43).

Moreover, in the early nineteenth-century, “Unitarian” was not a label that many of UU forebears claimed. They saw themselves, rather, as open-minded congregationalist Christians. “Unitarian” was, at that time, often a negative epithet used by orthodox Christians to criticize theological liberals. From the perspective of Channing and others of the time, being a “Unitarian” or an “Anti-trinitarian” was not the most essential difference about them. What was most important to them was teaching that God is love (as opposed to the orthodox/Calvinist teaching of a God of judgement and fear), that all human beings have free will and tremendous potential for doing good in the world (as opposed to orthodox/Calvinist doctrines of Original Sin and predestination), and emulating Jesus’ ethics and teachings (as opposed to fixating on what various people believe about Jesus).

Channing’s desire was for this theologically-liberal perspective to be viewed as a mainstream way of being Christian in the modern world (Selected Writings 62). But starting in 1805, the public controversy between the orthodox Christians and liberal Christians heated up. So when Channing was invited to deliver an ordination sermon for the new minister at First Unitarian Baltimore in 1819, he took the bold step of taking the word “Unitarian” that his critics were using as a pejorative and fully embracing it on his own terms.

That famous sermon was titled “Unitarian Christianity.” And a point of comparison, my sermons are typically a little more than 2,000 words and take about 20 minutes to deliver. Channing’s “Unitarian Christianity” was seven-times-longer at 14,000 words, and took about an hour-and-a-half to deliver (Mendelsohn 160). (Then again, they didn’t have tv and the internet back then, so there was less competition!) This particular sermon, often referred to as  Channiing’s “Baltimore Sermon,” became a sensation. It was quickly published and “no pamphlet, save only Thomas Paine’s Common Sense, had ever before circulated so widely in this county” (Wright 13).

Keep in mind that the year is 1819 — almost 200 years ago, and decades before the Civil War or the publication of Darwin’s On the Origin of Species — and Channing was unabashedly asserting in that famous sermon that, “the Bible is a book written for [humans], in the language of [humans], and that its meaning is to be sought in the same manner as that of other books.”: This “Baltimore Sermon” helped galvanize theologically-liberal ministers, a process which continued six years later in 1825, when a gathering of like-minded ministers in the basement of Channing’s Federal Street Church founded the American Unitarian Association, which in turn, more than a century later, merged with the Universalist Church of America to form the Unitarian Universalist Association in 1961.

As we continue to reflect on Channing’s legacy for us today — a legacy of organizing around the name “Unitarian,” a legacy of the consequences of overwork and the importance of self-care, and a legacy of remembering that we are each “a living member of the great Family of All Souls — I will conclude with a version of the words that Channing spoke in 1837 before the Sunday School Society about his vision of religious education, words that continue to inspire many people today:

The great end in religious instruction is not to stamp our minds upon the young, but to stir up their own;

Not to make them see with our eyes, but to look inquiringly and steadily with their own;

Not to give them a definite amount of knowledge, but to inspire a fervent love of truth;

Not to form an outward regularity, but to touch inward springs;

Not to bind them by ineradicable prejudices to our particular sect of peculiar notions;

But to prepare them for impartial, conscientious judging of whatever subjects may be offered to their decision;

Not to burden the memory, but to quicken and strengthen the power of thought;

Not to impose religion upon them in the form of arbitrary rules, but to awaken the conscience, the moral discernment;

In a word, the great end is to awaken the soul, to excite and cherish spiritual life.”

February 10, 2017 How to Cultivate a Culture of Dignity
Recent Comments
0 | Leave a Comment
"A Democracy IS a Dictatorship.You have many dictators instead of one.When withdrawing consent (IN THE ..."
crazysquirrel What Happens If We Withdraw Our ..."
"Thanks for this Carl! Perfect timing."
Allison “Fierce Self-Compassion”
"Whoever thought up the phrase "Defund the Police" should be run out of town on ..."
Michel What Does #DefundThePolice Really Mean? Awakening ..."
"All true, and there are a lot of stories which must be told...I only would ..."
Michel The Stories We Tell Matter: On ..."
Browse Our Archives
Related posts from Carl Gregg