I was honored to speak tonight at the Frederick Islamic Center for the Solidarity with Our Muslim Neighbors rally. The following were my brief reflections:

Thank you all for showing up to support our Muslim neighbors here in Frederick, Maryland. The normal everyday lives our world’s 1.6 billion Muslims is rarely seen on the news, film, or tv. Islamophobia, like homophobia, includes the word phobia because it is a fear that is exaggerated out of proportion to the reality of who our Muslim neighbors really are. Our government should investigate legitimate terrorist threats, but not in an irrational, phobic way that sacrifices our freedom and tries to set us against one another.

And while you are rejecting the irrationality of Islamophobia, also refuse to accept that we live in a post-fact world. Here are some actual facts. 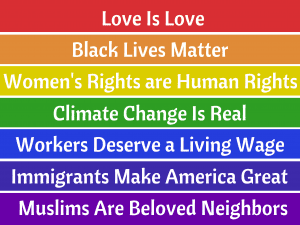 And the whole question of whether Islam is compatible with democracy is a distraction from seeing that the opposite is the case: it is Islamophobia and democracy which are incompatible. Islamophobia is a poison on our body politic. Yes, terrorism is a threat. But the next time you hear a politician scapegoating Muslims (and ignoring white nationalists) notice the ways that their demagoguery is fueling authoritarianism, undermining civil liberties, and decreasing tolerance — all of which are the much more serious threats to our freedom, democracy, and constitutional norms.

For now, I’ll end with these words adapted from the public theologian Brian McLaren:

There are two kinds of Islam, along with two kinds of Christian, Judaism, and every other religion and non-religion too: one of social control and one of social transformation. One to hold people down, one to lift them up. One an opiate to pacify people into compliance, the other a stimulant to empower people to imagine a better world, a better future, a better life — giving them the courage to live in peaceful defiance of violent, corrupt, and greedy powers-that-be. Neither kind is perfect, and both kinds contain good and sincere people. But if those who use religion for social control are left to define faith, the religion they define will be a false one, an ugly one, an idolatrous one.

May we continue to lend our hearts, our hands, our minds, our bodies, and our wills to creating movements of social transformation to lift people up and empower them to imagine a better world — that together we might build a world with peace, liberty, and justice for all.

(The video of my remarks is available here, starting about 45 seconds in.)

“Resisting Trump: One Book, One Podcast, One Daily Action“

February 3, 2017
Resisting Trump: One Book, One Podcast, One Daily Action
Next Post

February 7, 2017 The Great End of Religious Instruction: The Legacy of William Ellery Channing
Recent Comments
0 | Leave a Comment
"Yes, those who prefer to dream of a better world rather than accept the mess ..."
Barros Serrano Another World Is Possible: What Does ..."
""Wage labor is the bourgeois compromise between freedom and slavery."Modern "capitalism" (to use Marx's term ..."
Barros Serrano Alienated Labor, B.S. Jobs, & the ..."
"On this topic, I recommend two excellent social science resources: A book by Fordham Law ..."
Tim Bartik Another World Is Possible: What Does ..."
"I have long enjoyed all of your inspiring and informative pieces--and this one is my ..."
Nancy Pace Another World Is Possible: What Does ..."
Browse Our Archives
get the latest from
Carl Gregg
Sign up for our newsletter
POPULAR AT PATHEOS More Voices
1