What Happens If We Withdraw Our Consent to Be Governed?

Overall, in working for social change, one crucial principle to keep in mind is from the second sentence of Thomas Jefferson’s Declaration of Independence—that governments are not naturally occurring. We created them, and we can change them. In Jefferson’s words: “Governments are instituted among Men, deriving their just powers from the consent of the governed.” This view is sometimes called the “social view of power.” The whole paradigm can begin to shift if people in a society begin to withdraw their consent to be governed: “if civil servants stop carrying out the functions of the state, if merchants suspend economic activity, if soldiers stop obeying orders” (91).

In the case of extremely repressive regimes, you know the dissidents have won when the police and soldiers are given orders to shoot at civilians, and they refuse to shoot. Ultimately, a dictator is merely a single person, who is generally giving orders not personally carrying out orders. Their power can begin to rapidly disappear if people disregard, delay, or sabotage an order’s implementation (Engler 91). That is what Dr. King meant when he said that “non-cooperation with evil is as much a moral obligation as is cooperation with good.”

To say more about what forms “civil resistance” might take, allow me to introduce you to Gene Sharp for those of you who don’t know him already (8). Through extensive study, reflection, and research, Sharp put together a handout on 198 Methods of Nonviolent Action. 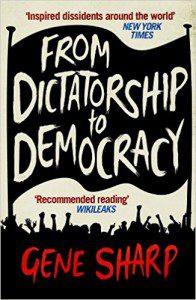 Part of his inspiration for compiling this resource was his experience serving a little more than nine months in prison for being a conscientious objector to the Korean War. He later came to believe that his noncooperation with the draft system “did nothing to get rid of the war system” and served only to keep his “sense of personal integrity together.” Following your conscience is important, but Sharp wanted to take the next step of changing the system long term. Over time, his research and writings have helped inspire and equip democracy movements around the world, earning his the nickname the “Machiavelli of nonviolence” (2). He is best known for his short book From Dictatorship to Democracy, which weighs in at a little more than 100 pages, is available free online, and has been translated into more than twenty-eight languages.

Sharp is clear that both he and many other proponents of civil resistance are not idealists. Rather, they have found nonviolent activism to be the most effective method in advancing democracy in the face of authoritarianism. In most cases around the world, authoritarian regimes have superior military power, so violent insurrections are usually put down with quick, brutal, and deadly force. But nonviolent approaches have the potential to win the hearts, minds, and consciences of the powers that be (5). Indeed, political scientists have found that “nonviolent movements worldwide were twice as likely to succeed as violent ones…. Over the past fifty years, nonviolent campaigns have grown both more numerous and more successful, even under brutal authoritarian regimes. Violent insurgencies, meanwhile, have grown increasingly rare and unsuccessful” (109).

As I said last week, there is a lot of bad news these days: the growing threat of climate change, the undermining of human rights, and a global tilt away from liberal democracy and toward authoritarianism. Also last week, on the 100th anniversary of our country entering World War I, our military bombed Syria. Speaking for myself (without making any claims about the varieties of pacifist positions), I am not a pacifist, and I honor the men and women who choose to serve in our armed forces. but I also believe that we should follow Just War theory, respect international law, and use both diplomacy and civil resistance to the greatest extent possible before considering the use of lethal force.

But even when political situations seem intractable, a study of the great historical movements for social change reminds us that often “the next great social movement is always invisible moments before it erupts.” Along those lines, I invite you to consider this excerpt from a powerful speech from a Sikh-American civil rights advocate in response to such a time as this. (I encourage you to listen to the full six minute speech.) Speaking about her fears around raising a brown-skinned son in this country, she challenges us:

The future is dark.

But my faith dares me to ask:

What if our America is not dead but a country still waiting to be born?

What if the story of America is one long labor?

What if all the [parents and grandparents] who came before us, who survived genocide and occupation, slavery and Jim Crow, racism and xenophobia and Islamophobia, political oppression and sexual assault, are standing behind us now, whispering in our ear:

What if this is our Great Transition before we birth a new future?

Remember the wisdom of the midwife: “Breathe,” she says. Then: “Push.”

Because if we don’t push we will die.

So what, then, might it mean to breathe and push within your spheres of influence? This might mean

What are your social and professional spheres of influence? What next actions might we take—individually or together— for peace and justice?

April 20, 2017 Is the Bible “History Remembered” or “Prophecy Historicized?”
Recent Comments
0 | Leave a Comment
"A Democracy IS a Dictatorship.You have many dictators instead of one.When withdrawing consent (IN THE ..."
crazysquirrel What Happens If We Withdraw Our ..."
"Thanks for this Carl! Perfect timing."
Allison “Fierce Self-Compassion”
"Whoever thought up the phrase "Defund the Police" should be run out of town on ..."
Michel What Does #DefundThePolice Really Mean? Awakening ..."
"All true, and there are a lot of stories which must be told...I only would ..."
Michel The Stories We Tell Matter: On ..."
Browse Our Archives
Related posts from Carl Gregg