What Protests Do (& Don’t) Accomplish

On Saturday, January 21, five 56-passenger buses—carrying 280 people—departed the parking lot of the congregation where I serve as minister for the Women’s March on Washington: an unforgettable day of peaceful protest amidst an estimated 500,000 people in the streets of D.C. If you add in all the sister marches, the total rises to more than 3 million people acting for peace and justice.

I am grateful for the opportunity to have attended the march, but as successful as the #WomensMarch was on many levels, it is also important to reflect on what it did and did not accomplish from a strategic perspective. It did not change any laws or result in regime change. It did, however, help many people feel less isolated and alone. And it gave many people—who had little or no previous political activism—a taste of what it feels like to act for peace and justice. That first step may well be related to a sustained increase in activism in recent days. 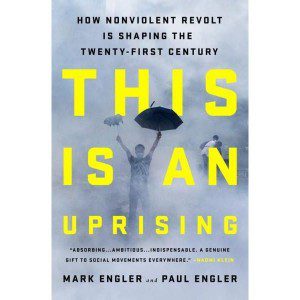 Around the time of the #WomensMarch, I shared that two of the books I am finding most helpful for such a time as this were:

Drawing insights from these books, I would like to invite us to reflect on what history has shown us about what does and does not work in creating social change.

Looking backward, history is often taught in a way that makes events seem inevitable—whereas at the time, the future was unclear to everyone involved. History can also be taught in a way that focuses on a few major turning points and leaders instead of trying to trace the ten thousand or more people and events that are the messy, complex reality behind any event.

When many of us remember The Rev. Dr. Martin Luther King, Jr., for example, some of the first events that come to mind are often the ways he helped lead the Civil Rights Movement to great victories in Montgomery and Selma. But celebrating only the highlights covers over all the years of organizing in between, when success was far from assured.

The Selma to Montgomery marches in March 1965,  catalyzed the Voting Rights Act. But if we turn back the clock a little more than two years, the path to victory was not yet in sight: “In January 1963, Martin Luther King, Jr. had just turned thirty-four. It had been seven years since the success of the 1956 Montgomery Bus Boycott.” Moreover, they had just received a demoralizing defeat in Albany (Engler x-xi).

So one lesson is perseverance. We need resistance and resilience for the long haul: the struggle for peace and justice is often measured in years, not hours or days. At the same time, we should keep in mind the saying that, “One definition of insanity is to keep doing the same thing and expecting a different result.” We should continually discern the best methods for our time, energy, and resources.

Both approaches have their strengths and weaknesses.

A prime example of the long-term, network-building approach is Saul Alinsky (1909 – 1972), as represented in his classic book Rules for Radicals: A Practical Primer for Realistic Radicals. It was written in 1971, the year before he died tragically of a heart attack at age 63, but it contains much hard-won wisdom from his years of experience. “Like organizers in the labor movement, Alinsky’s approach focused on person-by-person recruitment, careful leadership development, and the creation of institutional bodies that could leverage the power of their members over time” (32). He was always looking for the next step in achieving concrete, measurable change.

The other major type of short-term mass protest and disruptive uprising is embodied in examples like the #WomensMarch — or even more extended examples like the Arab Spring and #OccupyWallStreet. Each of these uprisings were inspiring, but it is also important to consider the longterm results:

by summer 2013 it had become evident that the Arab Spring uprisings [which had begun in December 2010] had failed to produce democracy anywhere except where they began, in Tunisia. Egypt’s first democratic government had been overthrown in a military coup that was ostensibly popularly supported. Syria had descended into a brutal and protracted civil war…. And Libya has simply fragmented; it has two mutually hostile elected governments, one in Tripoli and one in Tobruk, while various militias control different sectors of the country.

Or to consider #OccupyWallStreet, there were some positive unintended consequences, but it did not achieve its original goals:

Occupy demonstrated the efficacy of using social memes to quickly spread a movement, shifted the political debate on the fair distribution of wealth, trained a new generation of activists who went on to be the base for movements ranging from campus fossil fuel divestment to Black Lives Matter…. But Occupy did not bring an end to the influence of money on democracy, overthrow the corporatocracy of the 1 percent or solve income inequality (White 26)

The overall lesson is not the false dichotomy of choosing between either short-term mass protest or long-term community organizing, but strategically using the various available methods. So if you are interested, consider attending one of the upcoming mass protests in D.C. such as the #ScienceMarch or the #ClimateMarch. But I also encourage you to consider getting involved in a movement networking for longterm change on an issue or issues you are passionate about.

(I will continue this thread tomorrow in a post on “What Happens If We Withdraw Our Consent to Be Governed?”)

April 6, 2017
A Spiritual Practice for Responding to Relentless Bad News
Next Post

April 13, 2017 What Happens If We Withdraw Our Consent to Be Governed?
Recent Comments
0 | Leave a Comment
"I studied Mortuary Science in college and have watched some of her videos. She's fun."
ChrisFromNewEngland The Death-positive Movement & The Order ..."
"I recommend:“A Comprehensive Look at Gender Equality: The Doctrinaire Institute for Women's Policy Research” https://malemattersusa.word..."
PeacePromoter Trust Women: Bodies, Laws, & Reproductive ..."
"The key word in the sentence "His wages can be garnisheed (sic)" is "can." Other ..."
Timothy Griffy Trust Women: Bodies, Laws, & Reproductive ..."
"See Warren Farrell's book "Father and Child Reunion." Excerpt: https://uploads.disquscdn.c..."
PeacePromoter Trust Women: Bodies, Laws, & Reproductive ..."
Browse Our Archives
get the latest from
Carl Gregg
Sign up for our newsletter
POPULAR AT PATHEOS More Voices
1