Beyond $15: The Sturdy Floor of a Universal Basic Income #21stCenturyUniversalism

Beyond $15: The Sturdy Floor of a Universal Basic Income #21stCenturyUniversalism September 8, 2017 Carl Gregg

The “Fight for 15” is a current goal of the labor movement to secure both a nationwide minimum wage of $15 and the right of low-wage workers to organize unions. But on this week after Labor Day, I would like us to imagine what might be possible beyond an endless struggle for a-few-dollars-an-hour increase in our minimum wage. Part of what can hold us back is not only a lack of political will, but also a failure of imagination—or a sense of inertia which insists that the way things are is the way they will always be. However, if we zoom out historically, we can remind ourselves that many movements toward freedom and equality—the abolition of slavery in 1865 (only 150 years ago), securing the right to vote for women in 1920 (less than a hundred years ago), legalizing same-sex marriage in 2015 (only two years ago)—were all goals that many people claimed were impossible to achieve until just before they became a reality.

We “stand on the shoulder of giants”— ancestors who helped shift history toward freedom and equality. And now it is our turn to find out if we collectively have the fortitude to bequeath to future generations a better world than the one we inherited. When I reflect on the Universalist side of my own tradition of Unitarian Universalism, it occurs to me that a twenty-first century Universalism might be built on at least three key pillars:

These might sound like utopian pipe dreams—and the political divides in this country make it clear that achieving such goals would be far from simple—but they are no more audacious than the idea of universal salvation in the eighteenth century, universal freedom (through the abolition of slavery) in the nineteenth century, universal suffrage (for women) in the twentieth century, and universal marriage (for Lesbian, Gay, Bisexual, and Transgender citizens) in the early twenty-first century.

In particular, in the wake of Labor Day, I would like to invite us to reflect on how we might reimagine the future of labor. If you are curious to 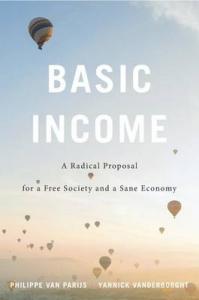 learn more, the best resource I have found on the topic of a Basic Income is a book published this year from Harvard University Press by Philippe Van Parijs  and Yannick Vanderborght, who are respectively an economics and a political science professor. Various theorists have written about the advantages and disadvantages of a Universal Basic Income since the late eighteenth century, but a growing number of serious proponents are currently advocating for  “a regular cash income paid to all [citizens of this country], on an individual basis, without a means test or work requirement” (1).

I find both of those quotes deeply inspiring, and I have found them to be helpful sources of guidance over the years at various points, for myself and others. But eventually, I started to push back against the unacknowledged privilege beneath those two ideas. For all their wisdom, these two pieces of advice fail to acknowledge that our economy is not currently set up to allow everyone to be paid a living wage to do their dream job.

But as I explored a few weeks ago on the topic of “A Brief History of Tomorrow,” there are coming shockwaves that have already started to deeply impact our economy, including climate change (forcing our species to recognize ecological limits), wealth inequality, and automation from robots and other forms of artificial intelligence (1).

And this is another point where a brief look backward can remind us of how much change is possible: “Beginning in the early nineteenth century and continuing for over a hundred years, working hours in America were gradually reduced — cut in half according to most accounts” through the Labor Movement, which pushed back against the exploitation of workers by employers. And in the nineteenth century, extrapolating from these earlier successes, many of the best economists and public intellectuals of the time “regularly predicted that, well before the twentieth century ended, a Golden Age of Leisure would arrive, when no one would have to work more than two hours a day” (Honnicutt vii).

For those forced to earn a living through alienated labor, a ten-hour work week would mean that they would still have time to pursue the American Dream of  “Life, Liberty, and the pursuit of Happiness,” instead of returning home from work too exhausted to do anything but rest long enough to drag themselves back to work. Instead of the utopia our nineteenth-century forebears imagined us inheriting, here in the early twenty-first century, many of us find ourselves in the middle stages of a growing corporate dystopia in which the highest court in our land has declared that “corporations are people” — and many of us actual humans work, not a ten-hour week, but at least a 10-hour day, building to a 50-hour, 60-hour (or more) work week (viii).

Turning to some of our best science fiction writers to help us imagine what the future could look like, Arthur C. Clarke (1917 – 2008), co-writer of the 1968 film 2001: A Space Odyssey said in an interview around the time that movie was released:

“The goal of the future is full unemployment, so we can play.” In other words, let the machines take care of feeding and clothing us, building our houses, cooking us awesome meals, making our cars and phones and other devices, driving us around town, handling our medical, legal, and administrative needs. We humans can then spend all our time on creative pursuits, leisure, play, scientific research, travel, entertainment, new business ventures, taking care of the sick…or helping each other out with various ideas and projects. (Bess 67-68)

Of course, 2001: A Space Odyssey, is partially a cautionary tale about how automation can go awry:

HAL: I’m sorry, Dave. I’m afraid I can’t do that…. I know that you and Frank were planning to disconnect me, and I’m afraid that’s something I cannot allow to happen. Although you took very thorough precautions in the pod against my hearing you, I could see your lips move.

Despite fears of the machines taking over, Clarke also saw the boon to human happiness that could arise from automation.

The year before 2001: A Space Odyssey was released in theaters, The Rev. Dr. Martin Luther King, Jr. published his final book, which was titled Where Do We Go from Here: Chaos or Community? In that book he wrote:

I am now convinced that the simplest approach will prove to be the most effective—the solution to poverty is to abolish it directly by a now widely discussed measure: the guaranteed income…. The dignity of the individual will flourish when the decisions concerning his life are in his own hands, when he has the assurance that his income is stable and certain, and when he knows that he has the means to seek self-improvement. (Parijs/Vanderborght 89)

Currently, the metaphor most often used to describe how we as a society seek to meet this goal is a social safety “net,” so that there are programs intended to keep you from falling too far during an emergency. But almost anyone who has tried to use those systems will tell you about how complex and demoralizing it can be to try to navigate social service programs. Proponents of a Universal Basic Income invite us to consider the alternative metaphor: give every citizen of this country a sturdy floor (4).

If you are wondering what such a “floor” might look like. To take the most recent calculations from the book I referred to earlier, and using the year 2015, a Universal Basic Income for the United States might look something like a monthly payment of a little more than $1,100, for a total of approximately $14,000/year, so that no one would be beneath the official poverty line. Over time, a Universal Basic Income would need to be keyed to an “average index over several years” to keep up with inflation (11).

Again, one of the greatest advantages of a Universal Basic Income would be to give every citizen a study floor from which to operate, giving all workers the flexibility to avoid  taking lousy jobs out of desperation. A Universal Basic Income would also provide at least a partial counterbalance—principally for women—who for years have done an unfair share of unpaid housework, childcare, and volunteering (102).

As to whether all of this is a desirable goal, my single favorite quote on this topic is from the economist John Kenneth Galbraith, who said that, “Leisure is a peculiar thing. Leisure is very good for the rich, quite good for Harvard professors—and very bad for the poor.” May we all be part of building a better world with more freedom for all (48). May we open the imagination of our minds and the compassion of our hearts to what might become possible when we join together in solidarity with ever-increasing circles of inclusion.

September 13, 2017 Bioethics, CRISPR, & "Our Children Redesigned"
Recent Comments
0 | Leave a Comment
Browse Our Archives
get the latest from
Carl Gregg
Sign up for our newsletter
POPULAR AT PATHEOS More Voices
1