Spooky Action at a Distance

Donald Hoffman is a professor of Cognitive Science at the University of  California, Irvine. A few years ago,The Atlantic magazine interview with him titled, “The Case Against Reality,” explored the astounding fact of human consciousness: that our species is awake and aware of our surroundings. I invite you to read just one paragraph from that interview:

Not only are [many neuroscientists and philosophers of mind] ignoring the progress in fundamental physics, they are often explicit about it. They’ll say openly that quantum physics is not relevant to the aspects of brain function that are causally involved in consciousness. They are certain that it’s got to be classical properties of neural activity, which exist independent of any observers—spiking rates, connection strengths at synapses, perhaps dynamical properties as well. These are all very classical notions under Newtonian physics, where time is absolute and objects exist absolutely. And then [neuroscientists] are mystified as to why they don’t make progress. They don’t avail themselves of the incredible insights and breakthroughs that physics has made. Those insights are out there for us to use, and yet my field says, “We’ll stick with Newton, thank you. We’ll stay 300 years behind in our physics.”

This quote challenges us to reflect on what we know about physics here in the early twenty-first century—and what the implications may be for our understandings of neuroscience, human consciousness, and our place in the universe.

There’s a lot to say about all of that, so I will invite us to begin reflecting on this area through the lens of Albert Einstein’s famous skepticism about scientific theories that appear to be, in his words, about “spooky action at a distance” (Musser 9). Einstein thought science would eventually find local action that would explain away the spookiness. But here’s the thing: the more scientists have looked into it, the more it appears that there really is “action at a distance.” Whether those distant actions are actually spooky depends on your point of view.

In speaking out against “spooky action at a distance,” Einstein was advocating for a Newtonian perspective sometimes called locality. When you think of the word “locality,” it might strike you as a somewhat fancy or antiquated way of referring to an area, neighborhood, or place where something is. One way of talking about the locality of this building is that it is in Frederick County. The point is that, in our everyday way of thinking, every object in the universe has, by definition, a given locality—that is, a place (3).

If you will stick with me, I will briefly lay out the two important aspects of locality for Einstein—separability and local action. My account is going to seems really basic, that explains why the discovery of actions that seemed to violate previously-accepted scientific laws was so haunting:

It’s important to note that:

Modern technology does not evade this principle; it merely recruits new intermediaries. A phone translates sound waves into electrical signals or radio waves that travel through wires or open space and then get translated back into sound on the other end. At every step of the way, something has to make direct contact with something else…. (5)

But here’s where it starts to get interesting. Whenever I think about Einstein’s skepticism toward “spooky action at a distance,” I’m reminded of the science fiction writer Arthur C. Clarke’s three laws from his 1962 essay “Hazards of Prophecy: The Failure of Imagination”:

So how does this apply to “spooky action at a distance”?

Well, part of what seems to make spooky action possible is a phenomenon known as quantum entanglement. In contrast to separability and local action, quantum entanglement says that, “Two particles that are entangled with each other are not literally intertwined, like balls of yarn; rather, they have a peculiar bond that transcends space.” They are separate. So, according to Newton, the only way they can impact each other is through some sort of local action—either directly or through some middleman. If, nevertheless, they continue to have an effect on one another “spooky action at a distance!”

Einstein’s view at the time of his death in 1955 was that there must be a significant problem with the current theory of quantum physics. But in 1964, almost a decade after Einstein’s death, a physicists named John Steward Bell came up with a brilliant idea for testing the existence of spooky action. “And when the experiment Bell described was carried out—imperfectly in Berkeley in the 1970s, more decisively in Paris in 1982, and near authoritatively in the Netherlands in 2015—the “spooky” predictions of quantum mechanics were vindicated” (Holt 231-232). 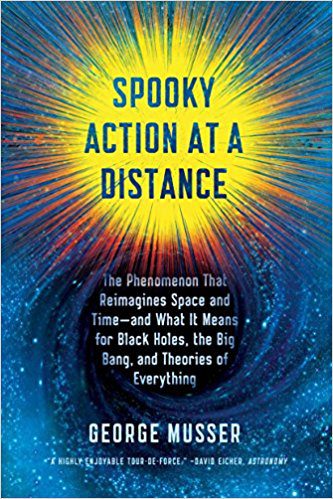 If you are curious to learn more, the most accessible starting point I have found is a book by the award-winning science journalist George Musser titled—you guessed it!—Spooky Action at a Distance, published a few years ago by Scientific American. For science and math nerds out there, a more technical introduction is the 3rd Edition of Quantum Non-Locality and Relativity by the Rutgers University philosophy professor Tim Maudlin (Musser 20). But seriously, unless you’re pretty much into science and math, definitely start with Musser’s book first.

But for now, let me say just a little more about the shift from “separability” and “locality” to “quantum entanglement” and “non-locality.” Here are three strange, weird, and spooky implications of quantum theory that seem to be true about this intriguing universe in which we find ourselves:

Indeed, one of my favorite parts of quantum entanglement is that it subverts the meaning of space. In our normal way of thinking, space is literally the “in between” that spaces things out from one another (Musser 36). Also in our everyday way of thinking, you must somehow cross intervening space to have an impact on something else. But it turns out that reality is sometimes more complicated that than. Spooky stuff, but also fascinating.

Einstein died in 1955 at age 76 still thinking that there must be something wrong with the theory of Quantum Physics that he helped develop. But as it turns out, the universe actually does have spooky action at a distance! For the latest generation of physicists, the basic attitude about quantum entanglement seems to be a basic acceptance of “That’s just the way it is” (Holt 240).

And although non-locality and quantum entanglement are fascinating in and of themselves, I would be remiss if I didn’t mention some of the practical implications that scientists are beginning to explore:

For instance, physicists at the University of Oxford proved in 1991 that entangled particles can create a communications channel so secure that not even the sneakiest government surveillance program could listen in. Once physicists were clued into the importance of entanglement, they began to see it almost everywhere they looked. It occurs even in living organisms. In photosynthesis, entanglement accounts for the unexpectedly high efficiency with which molecules transfer light energy into chemical energy…. (Musser 23)

And there is little doubt that we are barely on the edge of the frontier of what will eventually become possible in regard to harnessing the potential of quantum entanglement and non-locality.

Along those lines, last year I was fascinated to read an article from the BBC about Chinese scientists “‘teleporting’ a photon particle from the ground to a satellite orbiting 870 miles away.” Part of what they did was create:

4,000 pairs of quantum-entangled photons per second at their laboratory…and fire one of the photons from each pair in a beam of light towards a satellite…which has a sensitive photon receiver that can detect the quantum states of single photons fired from the ground.

Admittedly, the use of the word “teleporting” is a bit inexact and a clear attempt at headline grabbing. At the same time, it’s pretty cool. And while we aren’t ready to teleport human beings or starships anytime soon, in the words of one Oxford professor, “There are significant barriers still to overcome. But this is how transformative change begins.”

For now, I’ll move toward my conclusion with this quote from Musser’s book Spooky Action at a Distance:

Today we know that the universe has more to it than things situated within space. Nonlocal phenomena leap out of space.… They hunt at a level of reality deeper than space, where the concept of distance ceases to apply, where things that appear to lie far apart are actually nearby or perhaps are the same thing manifested in more than one place, like multiple images of a single shard of kaleidoscopic glass. When we think in terms of such a level, the connections between subatomic particles across a lab bench, between the inside and the outside of a black hole, and between opposite sides of the universe don’t seem so spooky anymore…. “If you agree that the fundamental level of physics is not local, everything is natural, because these two particles which are far part from each other explore the same fundamental nonlocal level. For them, time and space don’t matter.” Only when you try to visualize these phenomena in terms of space—which is forgivable because it’s hard for us to think in any other way—do they defy comprehension.” (168)

On this point of comprehensibility, you may be familiar with the new version of Cosmos, hosted by Neil deGrasse Tyson. On this point, I’m reminded of one of his favorite sayings, that “The Universe is under no obligation to make sense to you.” On one level, that is true. On another level, I’m astounded and incredibly grateful for the insights scientists continue to offer us almost every day that make our universe more comprehensible.

June 8, 2018
”We Are Already Saved from Perfection”
Next Post

September 12, 2018 Sharpening Our Pitchforks: How to Decrease the Income Inequality Gap
Recent Comments
0 | Leave a Comment
Browse Our Archives
Follow Us!

More Voices
The Love of Wisdom & the Wisdom of...
Carl Gregg