I have posted about reproductive justice once before—seven years ago, in 2013. At that time, the year 2011 had been the single worst year for abortion rights since Roe v. Wade, with 92 abortion restrictions passed in state legislatures. 2012 followed suit as the second-worst year for abortion rights since 1973 with 43 abortion-restricting provisions enacted at the state level (Guttmacher 2013). That year I also led a six-session class on reproductive justice at the congregation where I serve as minister.

In the wake of all of that, I have been thinking for a while that I didn’t have much left to say about a woman’s right to choose, but in the wake of renewed efforts to limit access to abortion, it turns out I do. (Let me also acknowledge here at the top that abortion rights also directly impact many transgender men as well as some gender-nonbinary folks, who can get pregnant.)

The current events that prompted me to begin planning this post were yet another series of state laws attempting to limit access to abortion, which disproportionately impacts women who are poor and people of color. And all of this is about to reach an inflection point, likely sometime this week, when the United States Supreme Court will release its ruling on June Medical Services v. Russo. This case involves the constitutionality of a Louisiana state law requiring doctors performing abortions to have admission privileges at a state-authorized hospital within 30 miles of a clinic that provides abortion. The effect of this law would mean that only a single doctor in the entire state of Louisiana would be able to legally perform abortions. (There would be a similar ripple effect in other states in which the state legislatures have a majority of representatives favoring abortion restrictions.)

This year’s case is very similar to the 2016 case, Whole Woman’s Health v. Hellerstedt, in which the Supreme Court ruled 5-3 that a state law in Texas was placing an “undue burden” on women seeking an abortion. Nevertheless, here we are two years later again waiting to see whether or not the U.S. Supreme Court will rule in favor of reproductive justice.

The term “reproductive justice” was coined by a black women’s caucus in Chicago in 1994 to connect reproductive rights with the larger social justice movement. As an attempt to bridge the tendentious split between the so-called “pro-life” and “pro-choice” camps, reproductive justice seeks to reframe the debate in terms of “The right to have children, to not have children, and to parent the children we have in safe and healthy environments” (Reproductive Justice 2015).

Relatedly, it may also be helpful to say a little more about what is and isn’t happening in the U.S. today in regard to reproductive justice. Part of why it’s important to have open transparent conversations about reproductive justice is that abortion is a fairly common and ordinary procedure: “Approximately 3 out of 10 American women who are currently age 47 or older have had one or more abortions. Looking forward, approximately 1 in 4 American women who are currently 47 years or younger are expected to have one or more in the future” (Watson 5). So although that is a notable decrease in the number of abortions over time, the projected rates still include 25% of American women.

Here’s another interesting statistic: “Almost half of American pregnancies are unintended. Forty-five percent” (30)! At least part of the reason for these accidental pregnancies is that although contraception has improved over the decades, contraception methods are not 100% reliable, and let’s just say that in the heat of the moment not everyone consistently remembers to follow all the recommendations in the instruction manual (33). If you will indulge me in a little sex ed, it is under-appreciated that:

And this isn’t even getting into the related struggle around increasing ease of access to contraception.

Instead of getting further into that, I would like to move to the most interesting discovery I made in my recent research into reproductive justice, which is a new book titled The Turnaway Study: Ten Years, a Thousand Women, and the Consequences of Having—or Being Denied—an Abortion (Scribner 2020) by Diana Greene Foster, a professor at the University of California, San Francisco. If this post leaves you interested in learning more, I highly recommend Dr. Foster’s book.

In contrast to the misinformation, speculation, and personal anecdotes often circulated in regard to reproductive justice, Dr. Foster’s research is grounded in a rigorous social scientific methodology. Her team conducted “Eight thousand interviews of nearly one thousand women over eight years” (Foster 11).

And although Foster’s book was published only a few weeks ago, some of you may have seen the headlines from a few years ago when the biggest finding of their study was published in the prestigious medical journal JAMA Psychiatry. What the Turnaway Study’s extensive research found is that for the vast majority, “abortion does not harm women’s mental health,” and “ninety-five percent of women who have abortions felt their decision was right for them” (247).

When women were asked why they chose to get an abortion, approximately two-thirds of women listed more than one reason (26):

The takeaway here is that, by and large, “Women make thoughtful, well-considered decisions about whether to have an abortion” (20).

To quote Ruth Bader Ginsburg— the second female Supreme Court Justice ever to be appointed—legalized access to abortion is about “a woman’s autonomous charge of her full life’s course” (186). Or let me back up and quote Sandra Day O’Connor, the first woman to serve on the Supreme Court, who was appointed in 1981. (As a side note, think about what that means: for the first two hundred and five years of this country’s existence, the Supreme Court was all male.) And here’s what Justice O’Connor—the first Supreme Court Justice in U.S. history who could actually be pregnant said in the 1992 case Planned Parenthood v. Casey:

The liberty of the woman is at stake in a sense unique to the human condition, and so, unique to the law. The mother who carries a child to full term is subject to anxieties, to physical constraints, to pain that only she must bear… Her suffering is too intimate and personal for the State to insist…upon its own vision of the women’s role” (231).

And despite the trope that a woman’s decision about abortion is “always difficult,” the data from the Turnaway Study show that is only true about fifty percent of the time: “For about half of women seeking abortion, it is a straightforward, even easy decision, and for about half it is difficult. That a woman makes this decision easily does not mean she takes it lightly. Instead, the choice may be clear when she considers her options and circumstances” (303).

Now, all this being said, I suspect there are at least a few of you reading this post who identify as pro-life. And from conversations I have had over the years, I understand that for many of you it is less about being anti-choice, and more about being “pro fetal rights” (Watson 13). 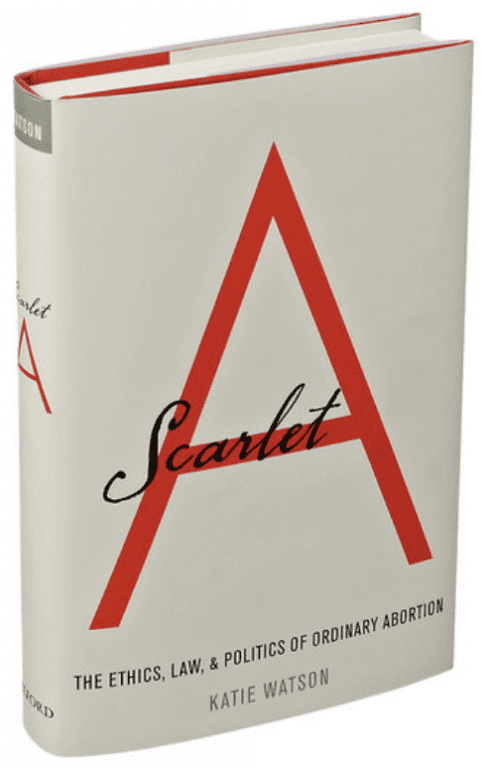 When I speak about reproductive justice in progressive/liberal circles, usually at least one or two people followup with me afterwards to ask if one can be progressive and pro fetal rights. The answer is yes, if you are willing to be part of the big tent that is the progressive movement. And that is similar to our situation in the U.S. generally. As the bioethicist Katie Watson has written in her important book Scarlet A: The Ethics, Law, and Politics of Ordinary Abortion (Oxford University Press, 2018):

The abortion debate often seems to boil down to a debate about vulnerability: Who or what is more in need of protection, fetuses or women? For me, the vulnerable thing in need of protection is pluralism—the idea that Americans who vigorously disagree about gender, family, sex, religion, and endless other topics can all flourish in the same country.

Along those lines, as I move to my conclusion, I want to take the risk of bringing up a reminder about the other end of the spectrum from Dr. Watson’s call for pluralism, and that is what happened in 2009 when Dr. George Tiller was killed by an anti-abortion extremist while serving as an usher at his Lutheran church in Kansas. I bring up this tragedy because of the reason that Dr. Tiller gave for why he was willing to serve as a physician at one of only three clinics nationwide at the time which provided late termination of pregnancy. This motto—emblazoned on the wall of his Wichita clinic and which he also often wore as a button on his lapel—was two simple words: “Trust women.” That’s why Dr. Tiller did what he did. He trusted the autonomy, the experience, the choice of women (311-312). He trusted that the vast preponderance of women seeking his help were acting in good faith and doing the best they could, given their life circumstances—which often include the gender wage gap, systemic sexism, lack of universal child and health care, domestic violence, etc.

And that is a crucial cornerstone of feminism: valuing women’s experience. It’s a vital step in dismantling patriarchy, and in building a more fair and equitable world: a world with peace, liberty, and justice, not merely for some people—not merely for some men—but for all. A world in which we can all get free. Trust women. That commitment can take us a long way toward building a new way.

June 8, 2020
Meditation, Neuroscience, Psychedelics: Who Am I? Who Are You? Who Are We?
Next Post

August 3, 2020 The Death-positive Movement & The Order of the Good Death
Recent Comments
0 | Leave a Comment
Browse Our Archives
get the latest from
Carl Gregg
Sign up for our newsletter
POPULAR AT PATHEOS More Voices
1

When Did Judaism and Christianity Part...
Religion for Breakfast
Related posts from Carl Gregg