I grew up in communist Romania. This means that I grew up with a lot of competition: the math olympiad, gymnastics, the national championship for this or that…

My school was practically visited by some selection committee almost on a monthly basis, though, on occasion, the committee was bigger and more important.

Once the archery scouts were out. Very important people from Bucharest. The whole school had to be tested for natural abilities. I remember this one because I was the only student who got selected among 1100.

I was 9. I was tiny and myopic. So what the hell was going on? Many asked that question, myself included. But sure enough, no one else had better precision in both firearm shooting and bow and arrow.

There was a lot of commotion around the idea of selecting a tiny, myopic girl to train in Bucharest with the national champion team.

Mother opposed it, of course, for two reasons: 1) she was not interested in her daughter winning any Olympic competition in archery, and 2) the training was to take place at the other end of the country from where we lived. So that settled it, as it settled my ambition to become a champion at shooting – if I even had any such ambition. I don’t remember that part.

I do return to this, however, as it’s only much later that I understood the motivation of the professional trainers.

Of course they didn’t care about my size or about my vision when they picked me for the national team, because it’s neither size nor your eyes that does it.

What does it is your breath. Ah…

In Japanese martial arts one talks about the concept of hara, which is to say, the condition you are in beneath your navel, three digits below, to be more precise.

You’re a champion already if you can breathe in such a way that you end up developing the power of your ‘hara’, as that is the power that wins whatever medals.

The sports that require precision rely on techniques of exhaling, as the power to win is located at the end of the exhaling breath.

I think that what my 9-year old did when facing the target was to breathe in the bullseye, and on exhale, send the bullet and the arrow straight into it.

Just as size and eyes don’t matter in sports that require hitting the bullseye, but rather, correct breathing, so lists of ‘meanings’ and grand proclamations don’t matter when you read your cards.

If you read your cards with a well-developed hara power, that is to say, the power of the gut that knows how to breathe and doesn’t simply rely on some cliché notion of the intuitive faculty, then you get to experience what reading like the Devil is all about.

Here’s a short 3-card practice for you that applies the hara power to your penetrating vision (even if you happen to be myopic).

Lay down three cards. Look at them as you breathe in.

The vulnerability of this act – inhaling is a vulnerable act – will insure that you perceive at the gut level all that which you don’t want to hear.

If your hara is strong, you can rest assured that your reading will not be an exercise in giving yourself what you want to hear, or what the other wants to hear, if you happen to read the cards for another.

Focus on the images of the three cards taken together without thinking ‘meaning’, for example, Justice means truth, the Hanged Man means resignation, the World means completion.

If you want to shoot for precision, the last thing you want to do is activate a list of random meanings.

So, breathe in what you see with the condition you’re in below the navel. That’s the condition that can read the cards for you beyond your regular fears.

Exhale. Make it a long breath. Note the kind of power your breath has on the last bit, when there’s no more movement.

Now shoot for your answer. I bet it will have the quality of a very fine cut.

When your reading has hara power, it makes everything stand upright and clear, with nothing but your own regulated breath standing between your sharpness and the target. 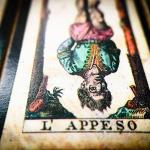 December 5, 2017
You Only Need One Thing to Get Your Magic Going
Next Post 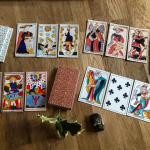 WitchCraft Cocktails: Persephone's Descent
Through the Grapevine
Related posts from THE CARTOMANCER