As a Zen inclined person I don’t dig duality. What is love and what is hate? They’re both emotions of the same kind, of the same mindset, of the same fiction.

From a linguistic point of view, duality is mightily entertaining. It’s the drive behind all transactions.

You don’t behave properly, you’ll go to hell instead of heaven. You have to love devotion to an idea, even when you hate it that the idea is all about prohibition. You want a powerful religion, you’ve got it right there, in the manipulation with opposites.

‘I’ve been poor and I’ve been rich. It’s better to be rich,’ said famed Gertrude Stein, and we get the mechanism for desire right there.

‘I’d love to have love in my life, more money, better health and a dream job,’ we all say, giving in to the idea of what we imagine the good life is. We tend to hate what we have already.

‘The Danes are the happiest’, the world thinks, and we presume that it has to do with economical reasons. While it’s true that socialism works here, thank god for it, it’s also true that the ‘happy’ people rather hate it, most of them being invested in the hunt for ‘this is mine.’ I live in Denmark. I can tell you about just how happy territorial people are.

The idea that I have something that you don’t is also a successful premise for most businesses, from selling a fridge to selling reverse psychology, as in, ‘no, it’s not you who is creating all this drama, it’s your shadow that does it.’ I get a slew of emails every day from well-intended people who take it upon themselves to inform me that if I can’t give myself permission to love myself, my shadow included, or rather, especially my shadow, they will give me this permission. Gracefully.

‘But, but, wait a minute,’ I want to say, ‘what do you actually know about me?’ I hear the silent answer at the other end: ‘I know that you desire, and that’s enough for my business.’

So, how does a Zen inclined person who teaches cartomancy deal with all this?

Well, there’s a dealing with it, but not in any obviously expected way.

There’s the laughter. When people go, ‘you’re like this, or like that’ and then offer a counter solution to my identity problem, I laugh.

There’s the question. When people go, ‘your sticky patterns must be broken, and I have just the recipe for how you do it,’ I ask, ‘really’?

There’s non-belief. When people go, ‘I can save you, trust me, all you need to do is believe me when I tell you that this means something,’ I go, ‘I don’t think so.’

Haha. Really? I don’t think so.

That’s what I say.

Why am I writing all this today? Because I’m ready to take another cohort of cartomancers for a spin.

My celebrated Marseille Tarot Foundation Course (followed immediately by the advanced module), is nothing other than an exercise in raising the students level of distinction. Nice martial arts style.

If I can draw my sword and cut people in halves even without having to look at them – ok, it’s not exactly legal, but still – then this is what I pass on.

There’s only you and your sword. Either you see what needs cutting, or you don’t.

Do the cards give me permission to transcend what others have identified as a state of inconceivable badassness? – says Jim Dugan Robitaille in his sharing in the social media of my call for the course: “Badass” doesn’t begin to describe this woman. If you want to be the best, you have to learn from the best. Cartomancy enthusiasts, check it out. Be warned… not for the faint of heart.’ Thank you, Jim, you get the cut.

The cards say: There’s a warm intimate community, one that I don’t believe in, however, as validation is not a thing I do. I don’t pet people on their shoulders, graciously giving them permissions of all sorts, permissions that I’m not even in the position to give. I bust the shit out of all belief. The way forward is not an institution that others build in the name of this or that Babel Tower pretense. The beyond even of the badass situation starts with dismantling, with a simple response: ‘Haha, really, I don’t think so.’

Since I’m talking about pedagogics rather than merely selling a course that doesn’t promise you any saving, let me state the following, now that I’m at it, in case you’re among the ones who wold like a challenge for a change.

For the Marseille Tarot Foundation Course this time I’ve decided to utilize the many benefits of the flipped classroom philosophy. The simple, but brilliant idea of flipping the classroom was first introduced in the mid-2000s by instructors who were frustrated that students would often come unprepared to lectures and go home with too little learning as a result. The philosophy is basically that if students receive a recording of the lecture in advance they can listen to it or watch it at their own pace and at times when they are the most receptive to learning.

Students can also form study groups that discuss the points the teacher makes and work on the tasks proposed in the lecture. For this we have a well-functioning Facebook group where students can post questions and exercise spreads and comment on each others’ work. As a teacher I can also enter the conversation in this group and help out if there are difficulties.

Finally every lecture is followed up by a a live session with me, where any questions that remain can be brought forward, and new examples can be presented by the teacher or by students themselves, so that the process of reading cards can be viewed live, as it were. These Q&A sessions are also recorded, so that students can view them again later or for the first time, if they were not able to attend live. This way the amount of recorded material is roughly doubled with little extra effort on the teacher’s part.

I hope you’ll check it out, and learn how to draw, cut, and sheathe. The course has volume, including ca. 250 pages of text, plus the fascinating discussion that goes on in a group that’s divested of other agendas than the exclusive learning agenda. 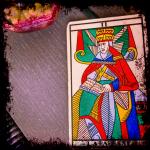 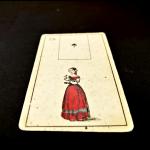 June 5, 2019 NOTHING SUCCEEDS LIKE SUCCESS
Recent Comments
0 | Leave a Comment
"It was really helpful to see you literally lay out the many different messages you ..."
Laurie READING DIRECTION IN LENORMAND
"You're welcome."
Camelia Elias Playing cards for risk analysis
"Great article on working with Playing Cards. Thank you Camelia!"
CaitrionaReed Playing cards for risk analysis
"Timely. A good reminder (for me) that, ultimately, what is being preached is based on ..."
Beverly Frable The dead serious occultist in the ..."
Browse Our Archives
get the latest from
THE CARTOMANCER
Sign up for our newsletter
POPULAR AT PATHEOS Pagan
1