AS IT HAPPENS: HOUSE MAGIC

This month has been eventful. I felt like a 5-year old playing ‘house’ who then got to think about the difference between that kind of magic and the magic of putting in a bid for a house, and being ready to pay for it cash in hand. Not a small thing, given that I wasn’t playing with any miniature house. By any Danish standard this house is big. Located by the Atlantic Ocean, less than 2 minutes walk to the beach, the house features 7 rooms (5 bedrooms), an immense kitchen plus living area, a large open loft that looks like a Japanese temple or a zendo mirroring a large courtyard soon to be a bonsai garden, three bathrooms, art gallery space, cartomancy parlor, and a great, cosy space in the basement for a darkroom for film photography processing. Just the thing, I thought to myself.

I put in the bid for the house on my dead mother’s birthday, June 6. She had a thing for houses. I called on her spirit and that of Miyamoto Musashi, a samurai. I made sigils for the new house. Several of them in sequence. I read the cards. I said, ‘by the end of this month, this house will be mine.’

I did a snappy 2-card divination series with the Lenormand cards, and called on more spirits. Ancestral and of personal preference. The preferred ones are all dead Zen masters and masters of strategic thinking on open field battle. Capable samurai generals. Geniuses, actually, who also had a sense of momentum by engaging with the refined art of treading the void, of acting on what arises from within, not on rumor and deceit, which are chief among the points of instruction in any war manuals since Sun Tzu.

I had the conquering metaphor in mind, winning the negotiating battle, scheming and predicting, because what else is there in this culture given fate of ours? Since I made public my intention to buy the house, some wanted to know: ‘What do you need a huge space like that for?’

I’m more of the opinion that you never need a reason to do or have anything at all, because none of it is real. It’s always symbolic value we transact with, from beauty to brute action. Right here and right now I like the idea of more space and the magic that’s called going down to the ocean in two minutes. And that’s all there’s to it.

On the general scale, I’ve always been fascinated by this question: When gambling for your life, playing war or playing house, what magic do you perform?

I call all of this, playing house or playing war, magic, because, as it happens, we’re all more than familiar with it, with magic, that is. We’re born into the symbolic order of things, and since day one, we learn to fake til we make it.

It all starts with language too, language that’s not even ours. We look around and the first thing that we realize is that it’s not a good idea to admit that we don’t know things, that we’re clueless. Look at children. When was the last time you saw a 4-year old admitting defeat, saying, ‘I really have no idea as to how I can answer that,’ if you posed a history, religion, or math question? Social scientists and behaviorists tell us that a child’s ability to invent, to spin off and lie downright is a sign of intelligence and adaptability.

This is all cool, until much later in life you realize that it’s rather hard to live according to dictations, testimonials, reviews, or other people’s experiences as a promise of how you can also [eyes rolling] have that, be that, experience that, whatever ‘that’ is. I often think that I’d like to meet the child who boldly says, ‘I don’t know.’ I’d place him on a par with a strong Zen master, the one who deconstructs the hell out of our beliefs, leaving us all naked, with one question alone to ask: ‘What is all this shit about? What is the purpose of it?’

With this in mind, my magic for the house had the starting point in my own gelatin silver prints. A very alchemical process. Hotter than hell. I know exactly what chemicals must go into creating the sigils, choosing carefully too a particular type of baryta, the silver paper. I use my calligraphy skills. I go swinging with my best Chinese brush. In gold. And blood red ink that has copper in it. Magic as fuck.

On June 20, the day before midsummer, all the papers were finalized. The battle was won. The current owners had to go down in price. They did, so magic was served. We walked into the light.

I’ve shared some of this magic on Instagram, as there are magic people out there who recognize the premise for their magic, who understand what it takes, who get it that all magical acts stem from sitting back and relaxing, the sole task being one of paying attention. It’s not effort. It’s not long and flashy invocations that can take up to two hours to perform in grand hyperbolic and amplified voice à la the Orphic Hymns, Marsillio Ficino, or Aleister Crowley. A Zen master’s magic would start with this instruction: ‘Shut the fuck up. Just pay attention to what arises. Recognize that, and act in accordance.’ Hmm. Here comes the bonsai garden first, in the back yard behind the natural flora surrounding the house.

Take this flow of synchronicity, for instance, something I didn’t share until today: The house is located on Broom Street. Number 4. Magically speaking, we’re here with the idea of the Emperor riding on the witch’s most trusted vehicle for transportation. Did I plan that? Of course I didn’t, but because you’re magic and you pay attention to magic, you recognize magic when it stares you in the face.

Also, this is the house that my partner was born in and where he grew up until he went to university 40 years ago. The house was built by his grandfather in 1920. Here’s a photo of it from 1957, one year before he was born.

Lastly on this type of story, the house hosts a real ghost in it. A very funny one. I’ve heard myself many stories about the male ghost also from my partner’s mother, a most rational being. He was an old fisherman, who came to visit the house when he died. The story of that is longer, but suffice to say that it’s incredible to have your Zen loft visited by a very exuberant man, Hjalmar, in love with chewing tobacco and playing cards. Just the stuff I’m very good at offering. I wrote about Hjalmar in a book of memoirs, Agger: Borrowed Memories, prompted by the house, in which I recall some of my first experiences with the place.

When the house came up on the market we obviously had to have it. I had to have it, because there was also magic in that, the magic that I, personally, needed to recognize beyond the illusion of control.

We had been looking for a house in the Danish national park Thy for a few years. I wanted the pine tree forest. He wanted the sea. We could never agree. But every time we had guests, the man suggested that we rented a fine cabin by the sea for them. What happens next? I, like an idiot, started falling for the sea. I started bending my will. I started talking about cultivating bonsai trees right there on the ocean line. The rest is history. My partner’s subtle magic worked. I had to recognize that. And I did. I had the financial power to close the deal, to have it on me. There’s a lot of magic in that alone.

As it happens, the neighboring house used to belong to real witches, or, women who correspond to the stereotype, who were called by the locals ‘witches’. There’s the story of how the women living there would chase away all naughty children in the area. They built a fence and planted thorny bushes around their house. My partner tells me that the kids liked to tease them, and they’d come out with a stick in their hand, threatening to eat them, literally. He was one of the naughty ones.

So there you have it: History, ancestral power, current power, the Emperor and the broom, vast space and old curses that protect that area around. I said today on summer solstice: ‘Thank you old witches, I’ll honor your desire for absolute privacy. I’ll make offerings and extend your spells.’ I drank the first glass of champagne in the house, in good company.

I’ll leave the story here, before I’ll have a dead Zen master shout into my ears: ‘Shut the fuck up. Tread the void, and know what THAT is like, as it’s not a borrowed experience based on endorsements, validations, testimonials, witnessing, and swearing up and down that things are so. It’s not that kind of phoney certitude. It’s not even an experience at all. It’s just magic a case of as it happens.‘ 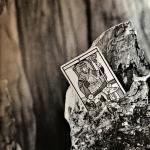 June 13, 2019
BEAUTY AND THE INFINITE CONVERSATION WITH THE CARDS
Next Post 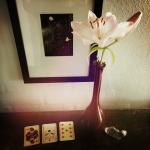 June 27, 2019 STEPPING INTO MATURITY
Recent Comments
0 | Leave a Comment
"It was really helpful to see you literally lay out the many different messages you ..."
Laurie READING DIRECTION IN LENORMAND
"You're welcome."
Camelia Elias Playing cards for risk analysis
"Great article on working with Playing Cards. Thank you Camelia!"
CaitrionaReed Playing cards for risk analysis
"Timely. A good reminder (for me) that, ultimately, what is being preached is based on ..."
Beverly Frable The dead serious occultist in the ..."
Browse Our Archives
get the latest from
THE CARTOMANCER
Sign up for our newsletter
POPULAR AT PATHEOS Pagan
1