To touch another by skating on the surface of their skin

To touch another by skating on the surface of their skin March 26, 2020 Camelia Elias

Those following my work will know that I’m not a fan of communities. In fact, as a Zen person, I can’t see myself being a fan of anything, as fandom is not what preoccupies my project of discarding both this and that. ‘I’m a fan of nothingness,’ I want to say, feeling at the same time a hot slap over my face from nothingness itself that is better at word deconstructions: ‘Fan?’ Slap. You heard that…

Be that as it may. Perhaps I should say that while I’m not a fan of communities, I do appreciate people coming together for things other than a pat on the back, false – even though well-meant – ‘encouragements’, mediocre sympathies, flake vulnerabilities, or the ever successful managing agenda that’s called, ‘give them what they want to hear’. Err, no.

Those of us proficient in reading cards have an edge here. We can experience a moment of instant skating over the surface of many things, and thus discover quite a ‘hidden’ world there, right under our nose, so to speak. At least that’s how I think of it, as digging deep into the illusion of something ‘inner’ is not my spiel. If I want to be really nasty, I can urge you all to have a talk with your body about this whole business of dark, deep, shadow business of the unconscious and how ‘precious’ it is. Test yourself. If you find that your skin starts to crawl, then you’re there with experiencing immersion with your own god-given surface.

I’d say that the best way to deal with the illusion of safety is by finding a language of immersion that counters the language of connectivity, connectivity with family, peers, communities, common enemy, and so on. What you want is to notice the surface of things, what happens on the surface of life, and act in accordance.

Take your cards and ask them questions for the surface. Don’t ask, ‘what is love to me?’ Ask, ‘what does love do to me?’ Same thing with loss. Go also from ‘what do I fear?’ to ‘what does fear do to me?’ If you really want to skate on your own skin, then ask questions that used to fascinate you as as child, with an added twist. Go from, ‘were there dragons?’ to ‘what do dragons do to me?’ When you played hide-and-seek and fell, how many scars did you have? Was it worth having them, especially if the love of your infatuation was nearby seeing you bleed?

I remember when I was in love a few times. All I wanted was to touch the other’s heart. Literally. Or touch the vibrations of their belly as they were trembling in awe and admiration. So much magic in it. Some lovers went insane. What I’m saying is that if you want to find a language for your love and loss, you start with your skin, and then move on to the skin of the other you want to touch. Can you count their wounds? Feel the breath of their dragons? The recoiling moves of their bodies?

Words can only do so much, and they are best when they are not words of maintaining the threat of duality and causality: ‘If you don’t take the path to Eden, you’ll go to hell.’ There’s no either/or. Just a game of gestures, a throaty or enchanting voice, and a skin, thick or thin that receives it all.

Ultimately what you want is to feel it in your fingers, to feel it in your bones, what it’s like to touch another. Think of your work with the cards not as something you do for the sake of digging, for the sake of aligning your conscious mind with the unconscious, or for comfort, the kind that institutes a hierarchy: ‘I’ve been through this myself, now I can help you because I’ve seen the whole of hell. I went from zero to the 7-figure.’ Fuck all the narratives of redemption. There’s no skin in them.

Think of your work with the cards as a procession, not as a process of digging through the illusion of inner landscapes. A procession that touches all the surfaces it parades. Childhood games and rituals. Outbursts of dismissive gestures: ‘not this, not that’. The Emperor doesn’t ‘mean’ power and control…

Ask your cards questions of skin in the game. What’s the Emperor’s skin like? Is it hot, cold, plump, hard? How does the skin of the kneeling Star smell? When the Empress lifts her skirts, how close is your nose to her legs? Is her skin steamy? Death has no skin, but the bones are in the game. You can smell them.

Stay tuned for cartomantic courses. Read like the Devil. 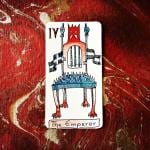 March 18, 2020
The year of the Emperor, falling off his throne
Next Post

April 2, 2020 Power in the powerless
Recent Comments
0 | Leave a Comment
Browse Our Archives
get the latest from
THE CARTOMANCER
Sign up for our newsletter
POPULAR AT PATHEOS Pagan
1