I went out in nature to collect some rotten wood for an art piece. It was a good day for rotten things that the beach was full of: rotten ropes, rotten bird corpses, rotten fish.

All this rotten stuff made me think of rotten associations. Just last week someone tagged me on Facebook, drawing my attention to the fact that I was friends with what was described as a rotten Tarotist, someone who has been making white supremacist statements on social media. I went to see who this person was, as the name rang no bells with me. Sure enough we were friends on Facebook. I noticed that the rotten person was also friends with a few other tarotists who I happen to actually know, and whose work I admire. Phew. I’m not the only who who’s careless…

Now, as it happens, I appreciate it when someone draws my attention to my friends list on Facebook, for this act is better than when I hear that my ass gets ditched in the community due to perceived rotten associations on my part. I’m not even asked about it, because, hey, I’m rotten…

I remember a few years ago when I accepted more than five hundred friend requests on Facebook in a day. They came from occultists of all forms. This sudden, massive interest in what I was doing was due to an essay I published in The Scalding of Sapientia by Anathema, “Lucifer Descends, Wisdom Ascends.” People liked that essay a lot. They wanted more. They followed me on social media. They were all welcome. Others said, ‘wow, you’re friends with so many Satanists.’ Some said nothing, but quietly ditched my ass. Now they all knew everything. Obviously I’m rotten. Fair enough. If one must decide that one’s assumptions are not rotten, then it can’t be helped that we divorce our paths. On a good day, however, when I invest some thought in other people’s motivations, I wish them on their soul to take a class in logic 101 where they could learn about the nature of assumptions, about making hundreds of them, and about how all of them can turn out to be rotten. As they say, logic is a bitch. In a war between an argument and an opinion, the argument wins every time.

As it happens, and if I must explain anything at all – which I’ll do here to make a point – I personally know about 500 people on Facebook. They are my cartomancy students, former students at the university, family and close associates. The remaining 2500 are people I don’t know. There are also some 800 of them waiting for me to approve of their friend request. I’ll do this on a day I when I have the time to go through them. Meanwhile, think for a second and do the math: When I go very diligently spending a great deal of time clicking ‘accept accept accept,’ do I also check people’s profiles? Do I check their friends’ profiles? Do I check their work and current political colors? Like hell I do. If I did that, I’d be sitting at my computer for years on end, doing nothing other than presume to know everything about people’s lives and characters based on what they say on Facebook. I don’t think I’d like to try that arrogance. Other arrogant expressions are more interesting. Also, I don’t have the luxury of policing people’s activities. Obviously then I must be rotten by the same logic of fallacious correlation as above.

Let’s just say that some pointed fingers are very amusing. Rotten assumptions are even more amusing. What’s not amusing is the lack of moral spine of all those who think you’re rotten because you don’t take it upon yourself to judge what others do, what they think, and what they believe. On Facebook. My default practice is this: I accept everyone, as I take it they want to follow my work because they want to learn something. I say ‘welcome to this space’, if some among the hundreds that get accepted in a bulk thank me personally for acceptance. If some turn out to make a circus on my territory, they’re out. But if that doesn’t happen, I don’t sit around and develop paranoia about who I’m associated with. This is Facebook, not my life such as I live it. I should hope to be able to maintain knowing that difference. But this practice is rotten, as far the pointed fingers are concerned. This being the social media, transacting with second hand opinions, rather than arguments is sanctioned very easily. But what is the purpose of inventing narratives of belonging? ‘You, in this box, the other one, in that box,’ say the self-appointed police department and the cause-driven missionaries.

Now to the actual point here, as I see a rather unfortunate development in terms of how stressful it is to have any social media encounters of any kind these days, Monty Python style: ‘Crucifixion? Good, one cross each, go to the left…’

Most of these stressful interactions stem precisely from the fear that one is not ‘well-associated’ – and crucifixion is very popular… As most people are not exactly Zen inclined, they suffer from sudden pointed fingers at them. They suffer from people’s cruelty and ignorance, from righteousness, from trends, from uninformend opinions, lies and malice, shit storms.

I read the cards on a daily basis for people who entertain such fears, the fear that the club, or cult, or identity group they belong to turns out to be rotten, or that the club, the cult, or the identity group purges itself of the ‘unwanted’ and they suddenly find you on that list: persona non grata, communities declare, with many members getting ready for lynching. About high time we all marched against such community practices.

My own response to this fear is to say what I always say: ‘if you perform your work beyond reproach, there’s nothing else to it. Perceived notions that rest on false correlations: ‘you’re rotten because you have rotten friends on Facebook’ are not anchored in reality. They’re anchored in some imagination that’s often informed by fear of labels.

What I read the cards for is the following: Clarity in my head. That applies to how I develop discernment regarding what I take at face value, what assumptions I make, and indeed, if I can’t help it, what policing of other people’s actions I perform.

Ask the cards for a double check:

1 – When in doubt, ask your cards not about your perceived notion of someone being rotten, but rather, about whether you have sound and just reason to believe what you believe. For, at the end of the day, merely following the trend of plastering a banner over your website stating that you’re not a fascist, a racist, a misogynist, or an all around insensitive person to other people’s predicament, will still be just that, a banner, not the truth.

2 – When fearful of the pointed fingers out there, look at what is presumed. If there’s no basis for the assumption, then declare it false. If you’re nasty like me, further declare that the ones who are quick with their guns when they can’t even see that there’s a target – let alone have the skills to hit it – completely lack moral spine. That decision would be your just decision, and you’ll be better off for having made it.

As to the tactics of insinuation, pay attention to what underlies their structure. If people ditch you with this type of comment: ‘I don’t think you honestly want to know why, alas,’ then see it for what it is: the expression of presumptuousness to know just how you’d react if presented with the situation. Alas, indeed, you don’t want to know what the clever person thinks, for the statement will already have disclosed everything you need to know.

I’m fortunate myself to sit with many who are capable of valuing my work on its merit, rather than go with whatever wind is sweeping, following some dangling pointed fingers in a nebula of projection. In our encounters over the cards, I always start with this advice that you can also benefit from: in a question that involves the many – ‘what do they think of me, why do they think this or that?’ – ask the cards a question of self-reliance.

It may well be that belonging to groups is significant for whatever reason, but the best above all is to remain self-reliant. It’s the only way that can afford you a position of distancing from dominant voices. Not all who yell have an actual point to make that’s anchored in factuality. Alas…

I asked my own cards today about the magic of self-reliance, and, as usual, I got just the cards. Very apt too, since I wanted to invest time to address the trouble with labels that are readily imposed on us, often without any solid grounds at all.

Dogs howl at the moon. Demons intensify the darkness of projected lies. The magic of self-reliance is in raising your lamp and asking: is this brouhaha worth my time? The mad world can have its dance with the Devil, without you in it. 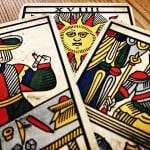 July 10, 2020 The art of the question: sins and virtues
Recent Comments
0 | Leave a Comment
"It was really helpful to see you literally lay out the many different messages you ..."
Laurie READING DIRECTION IN LENORMAND
"You're welcome."
Camelia Elias Playing cards for risk analysis
"Great article on working with Playing Cards. Thank you Camelia!"
CaitrionaReed Playing cards for risk analysis
"Timely. A good reminder (for me) that, ultimately, what is being preached is based on ..."
Beverly Frable The dead serious occultist in the ..."
Browse Our Archives
get the latest from
THE CARTOMANCER
Sign up for our newsletter
POPULAR AT PATHEOS Pagan
1