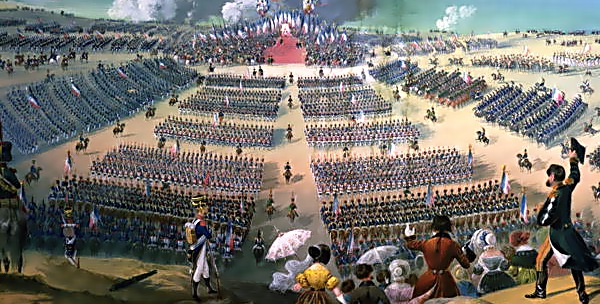 In general, I have my reservations about the image of “spiritual warfare,” not because it’s an inherently bad idea but because it too often means importing a kind of fantasy machismo into spirituality. Too many of the people who really like the idea of doing battle against demons haven’t ever actually been in a war, and it’s clear that what they are picturing is something more like being Aragorn, fearlessly charging out and mowing down the servants of the Dark Lord, and less like being George Orwell grubbing for potatoes in the mountains of Spain.

This romanticism causes two major problems. It allows us to self-aggrandize our own actions (especially in the Culture Wars), to think that we’re doing battle against evil when really we’re just being a bitch in a combox. And it enables a kind of rugged, compassion-free approach to other people’s suffering. After all, in war you expect casualties.

Spiritual warfare is not, however, a bankrupt concept, and for those of us who have no combat experience it can still be useful to look at the theory of the battlefield in order to think about how we can make progress in the spiritual life. Specifically, there is a similarity between the strategies that are used in warfare and the types of strategies that are effective in making moral progress.

To begin with, you need to have a clear objective. Obviously in the spiritual life the ultimate objective is “get to heaven,” but stating this is kind of like saying that the objective in war is “Victory!” You have to give your objective a concrete shape or else your efforts are going to be scattered and uncoordinated. Is your goal to take Berlin? To secure an unconditional surrender of the Axis powers? Or will you be content if the Germans just withdraw from France and give back Alsace/Lorraine?

Your objective should be something that you can realistically achieve. Keep in mind that in spite of the fact that Napolean and Alexander were arguably the greatest military masterminds in Western history their attempts at empire building failed because they didn’t actually have well-formed, achievable objectives. They were actually involved in war for war’s sake, and even though they were very good at it they weren’t able to hold, defend and administer the territory they conquered.

The spiritual equivalent of this is the person who gets involved in asceticism for asceticism’s sake, or the person who is constantly striving after a kind of moral vainglory without their efforts being consistently directed towards union with God or love for other people.

So your broad objective is, in most cases, a vocation. This can include one of the formal vocations (marriage, priesthood, religious life), but it doesn’t have to. It can also include objectives like “glorify God by creating works of beauty as an artist” or “pursue social justice within my community.” If you have one or two overarching goals that you’re pursuing then it becomes possible to organize your efforts so that you can effectively pursue those priorities.

Once you know what kind of a person you are basically striving to become, the next step is do a kind of interior stock-taking. One of the big obstacles that people often face in moral development is that there is an irreconcilable divide between a high ideal and their actual available resources. So you end up with a situation where someone basically just throws wave after wave of troops against an unassailable fortress until they have completely exhausted their strength in fruitless effort. Or where someone divides their efforts between so many different secondary objectives, trying to achieve simultaneous victory on all fronts, that they end up burnt out and unable to make progress in any theatre.

While I have little doubt that God will reward this kind of Quixotic striving, (He does understand that we are fools), I do think it’s advisable to pursue a course that has more chance of actual success. You want to amass enough resources to actually be able to achieve your objective, and ideally you want to do this economically. Yes, suffering is a necessary part of the spiritual life. No, that doesn’t mean that you should charge recklessly forward without any consideration for the damage that you are likely to do to yourself (or those around you.) If you’re trying to follow Christ, the path that minimizes suffering will still involve plenty of Cross-bearing. The difference is that if you choose a more economical course you’re more likely to achieve your goals and less likely to collapse in total despair.

So if you’ve tried a hundred times to achieve the same moral goal, and every time you fail in more or less the same way, a different strategy is probably in order. Instead of fighting your hardest and failing, yet again, try to think of ways that you could strengthen yourself and improve your position to give yourself a fighting chance.

Okay, okay, I know at this point someone is going to say “Does this mean that you just let yourself commit a mortal sin because supposedly you are trying to make yourself strong enough to stop committing it?” No. Because if you are not strong enough to actually avoid committing a particular sin – if you are constrained by force of habit, lack of spiritual or emotional maturity, psychological pressure, fear, anxiety, etc. – it isn’t mortal.

Grave matter only becomes mortal sin if you have full, free, unconstrained consent of the will. If you decide to stop obsessively scrupling over each particular temptation to commit an habitual sin so that you can actually focus on securing the interior or exterior conditions necessary to make a real, permanent change, that is not “consenting to sin.” It’s pursuing a gradual and prudent course towards moral growth.

Once you’ve taken stock of yourself enough to know what you are (and are not) capable of, the next step is to develop a realistic, smaller objective that you can start achieving right now in order to move yourself towards your ultimate goal. In some cases the smaller objective has to be something like “rest, recover and get my strength back” – particularly if you’ve been really merciless with yourself in the past.

Biding your time and gathering strength is not necessarily a sign of cowardice or indecisiveness: think of Montgomery, waiting until he had amassed overwhelming force before he would strike. Yes, it’s very impressive if you can go out into battle outnumbered ten to one and come home victorious. But if what’s actually happening is that you’re being slaughtered because you’re constantly going into battle underarmed and underprepared, probably it’s time to focus on prudence and caution.

To me, one of the ways in which the image of spiritual warfare is most helpful is that it can elucidate the difference between the objective nature of the moral law, and the extremely messy process of discerning the correct action in individual cases. The furore surrounding Amoris Laetitia, for example, is the result of a kind of overly abstracted moral thinking in which people assume that these are always one and the same: that if the goal is to take Berlin, it is never justifiable to do anything except immediately send all available troops along the straightest road to Berlin, regardless of how many Panzer divisions stand in the way.

If you know anything at all about military history, you know that this is a ridiculous way to wage war. It is a very good way to lose. It’s usually equally ineffectual in the spiritual life. It often results in getting stuck in a rut where you keep committing the same sins over and over and over again, always “trying your best” and never really making much progress towards overcoming them.

We need to think about spiritual warfare in a more holistic way. Survey the battlefield of the heart. Honestly assess our strengths and our weaknesses. Be vigilant and quick to exploit the opportunities that grace provides, but also to be responsible in conserving our strength when confronted with impossible odds. If we do this, it becomes possible to avoid silly macho fantasies about kicking satanic butt, and to instead develop rational and prudent strategies for moral growth.

December 21, 2017
Baby It's Cold in Phase 2: On Chastity Culture and Consent
Next Post

January 24, 2018 Two Things We Mistakenly Believe Are Ours
Recent Comments
0 | Leave a Comment
"I am one of those atheists who don’t care what anyone believes, but care very ..."
Ben in Oakland Crossing the Rubicon: Why I Will ..."
"You guys are calling Gnostic views nonsense, while not even naming one of these possible ..."
Justafoolagain Make Women Slaves Again
"Dumbest response ever, baby!!"
Raging Bee A Biblical Account of Toxic Femininity
"You've been waiting for me to reply to you? That's both flattering and creepy/sad. You ..."
Raging Bee A Biblical Account of Toxic Femininity
Browse Our Archives
get the latest from
Catholic
Sign up for our newsletter
POPULAR AT PATHEOS Catholic
1

Facing this Election, We Must Recall...
suspended in her jar
Books by This Author Books by Melinda Selmys