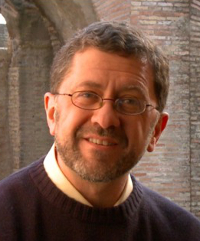 PETE: Good Pope, Bad Pope as the title and a black and white cover is a very unique way to present this subject. How did you come up with it?

MIKE AQUILINA: I didn’t! My original boring title was Twelve Popes. My publisher, Servant Books, surprised me with a better title, and then stunned me with the cover design.

PETE: Two things struck me while reading this book that I would like to get your thoughts on. First, there were some pretty questionable personalities in the early years of the papacy. What went through your mind as you discovered these details during your research?

MIKE AQUILINA: I actually found the early years — and even the early centuries — to be pretty clean. The Church venerates the first thirty-five popes as saints. That’s an amazing run. I even like that thirty-sixth pope, who broke the streak, and I tell his story in my book.

It’s in the so-called Middle Ages that things get grimy. I had heard about the bad popes before, of course, so I knew what was coming. But as I waded deeper and deeper into the muck of their crimes, I sometimes found myself wondering whether these men believed in God at all.

My second thought, though, was to marvel at God’s faithfulness. Jesus told the first pope: “you are Peter, and on this rock I will build my church, and the powers of death shall not prevail against it.” And he made good on his promise. Some of the popes committed sins that will make you shudder — actually, Peter himself committed sins that should make you shudder — but not a single one of them ever taught error in matters of faith and morals. That’s remarkable, when you consider the doctrinal mutation that has gone on ad infinitum among Christians who are separated from the Rock. At least one of the bad popes may have intended to give aid to heretics — I tell his story in the book — but once he was enthroned, he lost the will to follow through on his intention. Another man was a proud heretic when the emperor installed him as an antipope — and even he was prevented somehow from teaching bad doctrine! After two thousand years and two hundred and sixty-six popes, the Catholic Church continues to teach the faith in its integrity. Our God is an awesome God.

PETE: The second thing that struck me was the humanity of these men. They make mistakes just like us. What are your thoughts on this?

MIKE AQUILINA: My thoughts again go back to Peter. He denied Our Lord not once, but three times. He alone among the disciples earned that famous rebuke: “Get thee behind me, Satan!” Those are strong words. But he really did earn them. I’ll bet many of Our Lord’s enemies stopped worrying when they heard that he had named Peter as his vicar. If the papacy were merely a human enterprise, it would have failed after maybe five weeks of Peter’s leadership. But it’s not just human. It’s a divine institution because it was established by God incarnate. And so it’s the only institution that’s still around from the time of the Roman Empire. Pagan Rome’s glory is a magnificent ruin — rubble reconstituted as a museum. But the pope is very much alive — and the most Googled person on the planet. Did I mention that our God is awesome?

PETE: Of the 266 popes, you chose twelve to write about in this book, why these twelve?

MIKE AQUILINA: They’re the subjects of my favorite pope stories. That’s all. I wanted readers to be entertained, shocked, amused, and gripped by the narrative. Who knew that a papal-history book could be so full of sex, violence, betrayal, intrigue, trickery, torture, and comedy? There are chase scenes, Nazi villains, and a cameo appearance by Lucrezia Borgia, the famous poisoner. And it’s all true.

One of the good popes, soon-to-be-Saint John Paul II, did what armies and nations had failed to do. He brought down world communism. But he got into my book because he kissed five of my children.

PETE: Do you currently have any projects in the works you could share?

MIKE AQUILINA: I just finished writing a third book with Cardinal Donald Wuerl of Washington, D.C. It’s a celebration of all the feasts and fasts on the Church’s calendar. It’ll be out from Image Books in the Fall.

PETE: I haven’t asked you this question lately, my signature ending question. This is a blog about books. What is on your bookshelf to read?

MIKE AQUILINA: I’m a poetry junkie. By my bedside right now I have Interrogations at Noon by Dana Gioia; Elizabeth Bishop’s Complete Poems; and A.E. Stallings’ Olives. Life is so good.