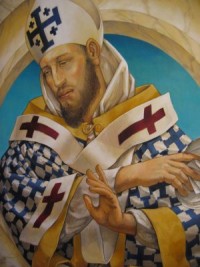 Before dawn after the Sabbath, Mary Magdalene came and found Jesus’ tomb empty; then she ran to Peter and John and told them someone had taken the Lord’s body. St. Cyril of Alexandria holds her up as a model of faith, she who did not abandon Jesus even when he had been killed in a shameful public execution.

This excellent and pious woman (Mary Magdalene) would never have allowed herself to stay at home and leave the sepulcher, had not her fear of the law for the Sabbath, and the penalty set for those who transgressed it, curbed the intensity of her zeal, and had she not, allowing ancient custom to prevail, thought she ought to withdraw her thoughts from the object of her most earnest longings.

But, when the Sabbath was already past, and the dawn of the next day was appearing, she hurried back to the spot—and then, when she saw the stone rolled away from the mouth of the tomb, well-grounded suspicions seized her mind, and, calling to mind the ceaseless hatred of the Jews (the Temple authorities), she thought that Jesus had been carried away, accusing them of this crime in addition to their other misdeeds.

While she was thus engaged, and revolving in her mind the probabilities of the case, the woman returned to the men who loved the Lord, anxious to gain the co-operation of his most intimate disciples in her quest. And so deep-rooted and impregnable was her faith that she was not induced to esteem Christ less highly because of his death upon the Cross, but even when he was dead she called him Lord, as she had always done, thus showing a truly God-loving spirit.

What can the faith of Mary Magdalene, who thought Christ was simply dead and buried, teach those like me, who know that Christ is risen?

Father, it was to Mary Magdalene that your Son first entrusted the Good News of his Resurrection. By her prayers and example, may I proclaim Christ as the living Savior, and one day come to see him in glory.

October 11, 2014 Church Fathers, Day Eighty-Two: St. Irenaeus advises us to study our faith
Recent Comments
0 | Leave a Comment
Browse Our Archives
get the latest from
Catholic
Sign up for our newsletter
POPULAR AT PATHEOS Catholic
1

Eucharist: 10 Early Church Quotes About...
The Pursuit of Holiness
Related posts from The Catholic Book Blogger