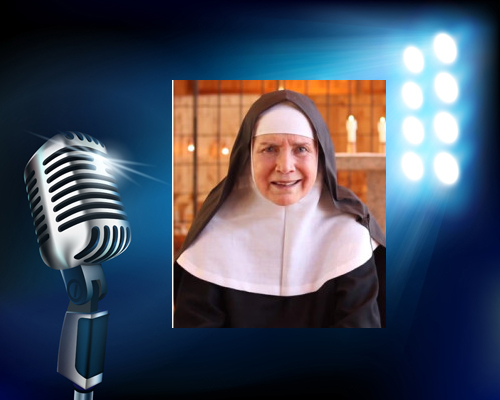 Dolores Hart was a bright and beautiful college student when she made her film debut with Elvis Presley in Paramount’s 1957 Loving You. She acted in nine more movies with other big stars such as Montgomery Clift, Anthony Quinn, Warren Beatty, and Myrna Loy. She also gave a Tony-nominated performance in the Broadway play The Pleasure of His Company and appeared in television shows, including The Virginian and Playhouse 90. An important chapter in her life occurred while playing Saint Clare in the movie Francis of Assisi, which was filmed on location in Italy.

Born Dolores Hicks to a complicated and colorful Chicago family, Mother Dolores has travelled a charmed yet challenging road in her journey toward love, serenity, and yes, God.

In 1963, she stunned Hollywood, when after ten highly successful feature films, and at the peak of her career, she entered the Abbey of Regina Laudis in Bethlehem, Connecticut, not in order to leave the glamorous world of acting she had dreamed of since childhood, but in order to answer a mysterious call she heard with the “ear of the heart.” While contracted for another film and engaged to be married, she abandoned everything to enter a contemplative monastery.

She remains a voting member of the Academy of Motion Picture Arts & Sciences.

Recently Michele had the pleasure of conducting a phone interview with Mother Dolores. Her is what she had to say about her book The Ear of the Heart: An Actress’ Journey from Hollywood to Holy Vows

MICHELE: After reading Lady Abbess’ book “Mother Benedict”, I could not wait to visit the Abbey of Regina Laudis- which I did a few weeks ago (mid-May).  While I was there, I had a parlor with Sister Judith (I love her-she is a shining star-she is love) who spoke to me of integration and recommended that I read your book.  Thank you so much for sharing your life and experiences which helped me to make sense of my own life.  What did you feel when you realized that you and Mr. DeNeut were finished writing the book, and what did you feel when you saw the finished product – your book?

MOTHER DOLORES HART: Amazed.  I couldn’t believe it.  We started it when we first met in 1958.  Dick was a great friend.  One day he asked ‘ Are you keeping a diary?’ I told him that I had been keeping a diary since I was eight years old.  He told me that we are going to need it.  He asked me to tell him from the diary what should go into the book and by the genius of Dick- he is a great editor, we have the book.

With sadness I tell you that Dick died a few weeks ago and I felt like I lost someone from my own family.

MICHELE: You mentioned that in the beginning years at the abbey, you cried yourself to sleep every night.  How were you able to rise again the next morning and start all over again?

MOTHER DOLORES HART: In the monastery you do what you have to do.  No one pays attention if you cry- you do not have to have a “Hollywood face”.  Of course, if you need to talk to someone, help will be given to you if you desire help.

MICHELE: And what ultimately stopped the tears completely at the end of this time period?

MOTHER DOLORES HART: God’s grace.  God’s grace gives you the assurance that you are doing the right thing.  Things hurt and we do not know the value of those things right away.  But we take this step, and that vow, and continue on.

MICHELE: Where do you find your patience/courage/strength when you have a dream that you believe that God has planted in your heart, but that dream does not seem to be unfolding?

MOTHER DOLORES HART:  Truly I have not had too many experiences like that, sometimes it takes a long time for things to work out, through the ups and downs in life.  If something doesn’t happen, it is because God has a different idea.

MICHELE: Ear of the Heart:  An Actress’ Journey from Hollywood to Holy Vows thoroughly defines integration from cover to cover….If you were to define integration in one image, one phrase, or scripture, or line from a script – what would it be?

MOTHER DOLORES HART: “Jesus Christ.”  (To which I replied, of course, that needs no explanation! Mother Dolores said it would take her some time to be able to explain it, but I believe I understand what she is saying…. Christ is everything…….Christ defines everything……. Christ explains everything.)

MICHELE: Finally, this is a blog about books. What books are currently on your bookshelf to read?

MOTHER DOLORES HART: I just finished Judy Garland’s book ‘Get Happy’ and I will be reading ‘The Confessions of St. Augustine’ along with the community, which will be a great experience-reading it as a community.  I hope to also read more of Judy Garland’s books in the future.

(It was such a pleasure talking with Mother Dolores….. and I told her how much her book affected my life- learning about integration– how all of the puzzle pieces of life fit together according to God’s plan…. but it is hard to see it until you look back at your life.  Mother Dolores then said that she was so happy to hear that because “When you write a book, you hope it will do some good and help others.”  I then shared how much I enjoyed visiting the Abbey and we both agreed that it would be wonderful to meet when I have the opportunity to return for another visit!)