It’s Christmastime, so Joseph and his God-given dreams are on our minds. In today’s wave of terrorism-induced anti-immigrant, anti-refugee phobia, we have occasion to recall that Joseph led his wife and newborn son to Egypt as refugees to escape the murderous genocidal schemes of a Middle Eastern dictator named Herod. Given the violent history of the Zealot insurgencies against the Greeks and Romans, would we have welcomed these suspicious visitors if we were in charge of Egypt’s borders?

We are also reminded by the coming of Epiphany that God also gave dreams to the Magi, aristocratic men who came to Palestine to worship Jesus as the King of Kings. Given their likely adherence to theologically suspect Eastern religions and astrology, would we have welcomed them into the faith? Or would we condemn them for their worship of false gods?

But let’s focus now on Joseph’s reaction to the news of his fiancée Mary’s pregnancy:

18 This is how the birth of Jesus the Messiah came about: His mother Mary was pledged to be married to Joseph, but before they came together, she was found to be pregnant through the Holy Spirit.

19 Because Joseph her husband was faithful to the law, and yet did not want to expose her to public disgrace, he had in mind to divorce her quietly. 20 But after he had considered this, an angel of the Lord appeared to him in a dream and said, “Joseph son of David, do not be afraid to take Mary home as your wife, because what is conceived in her is from the Holy Spirit. 21 She will give birth to a son, and you are to give him the name Jesus, because he will save his people from their sins.”

22 All this took place to fulfill what the Lord had said through the prophet: 23 “The virgin will conceive and give birth to a son, and they will call him Immanuel” (which means “God with us”).

24 When Joseph woke up, he did what the angel of the Lord had commanded him and took Mary home as his wife. But he did not consummate their marriage until she gave birth to a son. And he gave him the name Jesus. (Matthew 1:18-25 NIV)

Like many organizational leaders today, Joseph the Jewish carpenter was a good man committed to obeying the law, yet inclined to obey it discreetly to protect Mary as much as possible. These instincts are admirable and commend Joseph as a good man. But good wasn’t what God had in mind. Through his angelic messenger, God challenged Joseph not just to be good, but to take the scandal and the risk upon himself and to take full possession of Mary’s humiliation, despite his innocence.

Imagine Mary as an employee with a charge of misconduct against her. Contemporary executives and HR departments may handle her case in a conscientious, “best practice” way like Joseph would have done. It is as conciliatory and as discreet as can be—leaving a great deal of public ambiguity about whether the employee is actually guilty, and of what. We can agree that executives are just doing what they must, adhering to the best practices and obligations of modern employment policies, many of which are modern interpretations and applications of biblical principles of justice and mercy.

But while such “best practices” of public relations and personnel discipline are honorable and defensible, they are far from ideal. The angel called Joseph to something much more radical: the public embrace of the scandal and the radical protection of the apparently guilty party. I have previously reviewed research (see “Are you a leader or a predator?”) that shows managers earn trust by protecting their subordinates from external pressures, not by transferring pressures to employees.

May we exempt ourselves from Joseph’s difficult calling on the grounds that the birth of Jesus was an exceptional case, that God does not send angels to call the rest of us to bear the burden Joseph bore? Not if we assign any meaning to the preaching of Jesus: if the first shall be last, if we should go the extra mile, if we should turn the other cheek, if we should love our enemies, if we should seek first the Kingdom of God, how can we say we should not take on the scandals of others as our own?

We must take on the scandal of Christ’s birth and death as our own—why would we as Christian leaders refuse the much lighter burden of bearing our coworkers’ scandals?

As some readers may have intuited, this post is motivated—but only in part—by Wheaton College leadership’s treatment of tenured Professor Larycia Hawkins, placing her on involuntary administrative leave due to a theological controversy involving Islam. More on that specific scandal in the next post.

November 25, 2015
Our model for leadership is a pagan prostitute
Next Post

How Can We Exalt God?
The High Calling
Related posts from Charting Church Leadership 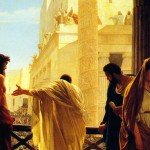