The exemplary restraint of the ultimate conservative leader

A great leader does not respond to provocation, retaliate to taunts with rage, threaten the opposition. The ultimate conservative does not destroy others to protect his honor or to express his patriotism.

Our model for leadership, the One in Whom all things hold together, suffered his own destruction to bring about His Kingdom.

The people stood watching, and the rulers even sneered at him. They said, “He saved others; let him save himself if he is God’s Messiah, the Chosen One.”

The soldiers also came up and mocked him. They offered him wine vinegar and said, “If you are the king of the Jews, save yourself.”

There was a written notice above him, which read: This is the King of the Jews.

American Christians may read this passage too thinly. Yes, we see a cruel injustice and an emotional tragedy. We don’t recognize the cosmic politics of the crucifixion. When we do, we focus on the rulers’ and soldiers’ blindness and meanness.

But we rarely imagine the alternative history. Try it now: imagine the apocalyptic moment when the crowd is confronted with the staggering power of the angry God on the cross. Don’t imagine Hollywood special effects. Imagine the actual earth-shattering effect of His unmitigated wrath.

He could have risen up as a thousand-foot giant with His head in the clouds and squashed them between His mighty toes. He could have melted them with fire from His eyes. He could have bloodily bisected them all with a single slash of his tongue. He could have deployed an angel army to crucify every one, a literally excruciating experience of well-deserved punishment.

Even imagining God’s revelation, it’s easy for us to focus on the superhero movie drama of the moment when the bullies realize they’ve been taunting a true God, someone who makes both hulking Bruce Banner and Norse villain Loki look like puny lightweights.

What was not done

What we don’t imagine often enough is the incredible restraint of Jesus. God Himself with human nerve endings, adrenaline, cortisol, and endorphines, was being fiercely provoked to show Himself. The eclipse and earthquake that followed Jesus’ death was just a shadow of the power the Creator could unleash to vindicate Himself. And yet He restrained Himself.

You know you and I would have cracked, lashed out, asserted ourselves, given them what they deserved. I can’t take a few flicks of my ear without throwing an elbow. Ah, the deep gratification I’d have felt, hanging that high priest on a skyhook, giving that centurion a very generous taste of his own rusty nails.

But Jesus forgave even as He suffered, and He commanded us to pursue justice by restraining ourselves:

“You have heard that it was said, ‘Eye for eye, and tooth for tooth.’ But I tell you, do not resist an evil person. If anyone slaps you on the right cheek, turn to them the other cheek also. And if anyone wants to sue you and take your shirt, hand over your coat as well. Matthew 5:38-40 (NIV)

My dear brothers and sisters, take note of this: Everyone should be quick to listen, slow to speak and slow to become angry, because human anger does not produce the righteousness that God desires. James 1:19-20 (NIV)

God’s economy is not without justice. Restraint is the measure of the man and the means to achieve justice.

Go and do likewise

Were Jesus here today, he would be rebuked, accused of turning a blind eye to evil. He’d be “weak on crime,” have “no head for the bottom line.” When soft-spoken is “low energy” and holding a complex perspective is “waffling,” we will get high-energy leadership that makes more mistakes and then punishes others to protect personal reputation. We have to resist such bullies, at church, at work, and in the nation’s capital.

Great, conservative leaders—of families, churches, organizations, and nations—conserve the peace and rejoice in the knowledge of the restraint they exercise. Great leaders take pride in what wasn’t done, what the left hand doesn’t know that the right hand did. Great leaders celebrate vengeance that was left to God, value a reward to be received in heaven, and believe that mercy triumphs over judgment.

May your faith be reinvigorated this Easter. 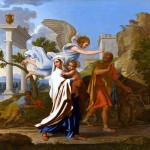