My daughter flew back from Chicago for New Years day. She arrived three hours late owing to the need to thaw and de-ice the plane twice before taking off. Greeted by freezing rain falling sideways and her mom and one sister, we made it home before the rain became snow and all of Northern Virginia, DC and bordering counties of Maryland came to a stand still for the next four days.

We’d secured her a hotel room for the first three days, as our youngest tested positive for Covid as of December 26th. He’d been isolating with his older brother who volunteered to supervise him over the Christmas break. Still, we wanted to safeguard everyone. We talked about going out to lunch, shopping, seeing the Spiderman movie, things we’d hoped to do while she stayed once things opened up. I bought her some of her favorite vegan ice cream. The last day of the winter storm (January 4th), she checked out of the hotel and spent that day dropping off gifts to her friends.

Because we’d had one positive, we’d been searching for tests. As of January 5th, when we were finally able to get our hands on some rapid tests and the results of others’ pcr’s, my daughter from Chicago faced not one, not two, not three, not four, but five who tested positive at home, and her one closest brother (who she drove to UMBC on Tuesday), quarantined at his school for the same reason. Within three days, she too tested positive, as did the older brother who volunteered to help and one other sister for good measure who shared a room with the youngest –who also had covid. Now we had been careful. We wore masks indoors, we wiped everything down. We’d all been vaccinated and where age allowed, received the booster. No one seemed too badly off except her dad. He had bad chills at night and seemed weak.

Everyone stuck at home quarantining made the two healthy ones the servants bringing meals to all floors. It also meant nothing much else happened. People called each other on the phone in the house, and played games online, but the visit turned into something other than what anyone had planned. The days melded together.

The last day before she left, she and her sister tested negative and rejoined the healthy squad. That meant they got to hunt down the bird that flew into the house when they were taking out trash. Trapped behind closed doors, we heard them calling out the bird’s position rather like a boss battle at the end of an online game. “It’s in your sector.” “It’s almost cornered.” An hour later, the mighty trackers captured the sparrow using a large hand held fishing net (the kind you use to bag a caught fish) and released it back into the wild. Our house did not get baptized in bird poo as we’d feared from the process. We considered that a major victory.

However, the last night became less festive, as her father needed to go to the ER because of his oxygen levels. It turned out he had covid/pneumonia and that’s why his response to all of it was worse than everyone else’s. I ordered steak and chicken fajitas to celebrate her last night and mitigate the stress of everyone feeling haunted by their dad being in the hospital. She left that next morning, her one healthy brother driving her to the airport. She sent pictures of her life sized stuffed dinosaur laid out taking up a whole overhead compartment in the aircraft. We hadn’t gotten in a visit or a whole family meal or photo. Her dad’s recovering in the hospital and it seems like it will just have been an eventful early start to the New Year, with few “moments” but memorable.

January 17, 2022 On My UnBucket List
Recent Comments
0 | Leave a Comment
"Being a parent is the greatest blessing. As a Father of seven, I know that ..."
Catholic Dad Blessed Then and Now
"I love your post! A lot of us focus on making it to the mountain ..."
Catholic Dad Easter Monday, Now What
Browse Our Archives
Related posts from Chocolate For Your Brain!

Catholic
Not Wading into It
Chocolate For Your Brain!

Catholic
Over at Our Sunday Visitor This Week
Chocolate For Your Brain! 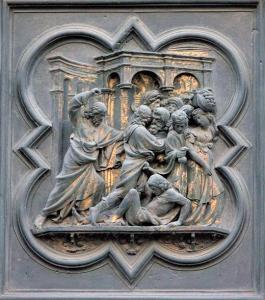 Catholic
Are We Salt of the Earth, or An...
Chocolate For Your Brain!

Catholic
Glimpses
Chocolate For Your Brain!
TRENDING AT PATHEOS Catholic