I was raised by parents who loved the Bible and who taught me to love it at an early age. My mother set a consistent example of studying the Bible and praying in the early hours between 4:30 and 6:00 every morning. My father set a consistent example of expository preaching that let the passage of Scripture set the agenda for his sermon, and then teaching my brothers and me to read the Bible during weekly family devotions. It meant so much to my parents that we know the Bible that they once paid my brothers and me $250 to read the whole Bible in a year, which I did.

Even though my father was a Presbyterian minister, and, as I later found out, a devout Calvinist, I don’t remember ever hearing about Calvinism or being taught the 5 points of Calvinism growing up. I was simply taught ‘mere Christianity’ and the gospel that Jesus died for my sins. And I am grateful for that grounding in the faith.

When it was time to choose a college, I chose to go to Baylor University, the largest Southern Baptist school in the world. I assumed I would be getting a Christian education and that I could grow in my faith there. While the former is debatable, the latter certainly happened. I was suddenly in a world of Baptists, at the time, there were easily 100 Baptist churches in Waco, but there was only one Presbyterian church and my brother warned me against it. But, since I am a Christian, I make it my practice to worship with other believers and to be instructed by the church every Sunday no matter where I am, so I started looking for a church immediately after moving to Waco. I started attending a moderate-sized Baptist church with a thriving college ministry. Sometime during the Fall of my freshman year, I heard the pastor of that church say, about salvation, “God casts a vote, the devil casts a vote, but you cast the deciding vote.” While I didn’t have a sophisticated theological grid to run that statement through, it hit me that the Bible didn’t seem to talk about God and salvation that way.

That freshman year I also began reading books by the theologian RC Sproul, first The Holiness of God and then Chosen by God. A conviction grew, that history and creation are primarily the story of God’s work to create and redeem a people for Himself and to bring glory to Himself. This was not the story that I heard when I went to church or to a campus ministry meeting or when I listened to the Christian music everyone was listening to- those messages were almost all based on pleading with unbelievers to surrender their lives to God and for believers to get serious about faith and holiness. Those aren’t wrong emphases, but they seemed to be an incomplete picture of the Christian story.

The passage that captured my imagination that freshman year, that sealed my commitment to Reformed theology, and that increased my awe and devotion to Christ, was John 6, specifically verse 44. When I read it, I could imagine the scene: Jesus has just miraculously fed an enormous crowd of people, something so awe-inspiring that the people were talking about how He was ‘the One’ and hoping to make Him king. But, instead of letting that happen, Jesus goes off to a mountain by Himself. The next day, the crowds find Jesus and He encourages them not to just look for physical food but for spiritual food. He goes on to say that the manna their forefathers ate under Moses was a sign of that greater food. And He then makes a shocking claim- “I am the bread of life… [who has] come down from heaven,” essentially saying that eternal life with God is found in Him, this man standing before them. He follows that bomb up with two further revelations: “All that the Father gives me will come to me, and whoever comes to me I will never cast out” (v. 37) and “No one can come to me unless the Father who sent me draws him. And I will raise him up on the last day” (v. 44).

It’s that last statement that knocked me out as a freshman in college. I was not hearing the idea that something has to happen before we can come to God; that we have to be drawn by God Himself. As I began to study Calvinism, this was the thread that wove throughout: that salvation is a work of God from first to last. I saw that, though we are responsible for our actions and sin, and though the outward call is universal (“whoever comes to me I will never cast out”), God is the prime mover in saving His people. God is not up in heaven wringing His hands over who will choose Him, and He is not casting a vote that gets equal influence with the devil’s vote hoping to win our patronage- God is actively drawing people to Himself. Here in John 6:44 was a hint of the effect of total depravity, the implication of unconditional election, the inescapable conclusion of limited atonement, the stark reality of irresistible grace, and a building block for the doctrine of the perseverance of the saints (which, of course, is about God persevering to perfect His people and to raise them up on the last day, not us working to stay in God’s good graces).

Jesus teaches here the necessity of God’s regenerating work in unregenerate people, and He was so confident in the Father’s saving power and work that He could speak truth and handle rejection. Again, in contrast to many of the revival preachers I was being exposed to who were pleading with people to get saved and hoping to get a large number of ‘decisions’ every time they preached, I was struck by the reaction to Jesus’ bread of life discourse and by Jesus’ reaction to their reaction.

Imagine that. Jesus has the crowd at his fingertips; they love Him, they want to follow Him wherever He goes. And instead of playing on his celebrity and obtaining allegiance from people with superficial faith, He challenges them with the hard truths of God’s sovereignty, the uniqueness of Christ, and the necessity of spiritual and sacramental union with Him. What a failure as a revivalist preacher, but what a model of a faithful preacher of the full counsel of God! Reading John 6 made me want to teach the whole counsel of God regardless of whether it was popular (and believe me, it was not popular in Waco in 1991).

I have a pastor friend who hate labels- he doesn’t want to identify as a Calvinist or an Arminian, he simply wants to be a Bible believing Christian. I understand, and even empathize with, his desire to not put his faith in the ‘traditions of men.’ And yet, traditions are helpful; since all theological camps are seeking to be ‘merely biblical,’ it’s not helpful to say “I’m just going to believe the Bible.” We all believe the Bible, but we interpret it differently, and we need the help of godly men and women who have gone before us to understand the Bible. And while John Calvin and his disciples were gifted, but flawed, theologians, and Calvinism is just a tradition and is not perfect, it is the tradition that I believe represents Scripture most accurately. And John 6:44 was my gateway drug to becoming a Calvinist. 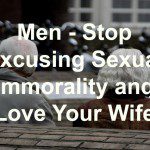 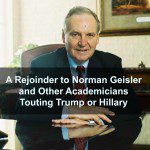 September 29, 2016 A Rejoinder to Norman Geisler – & Other Academicians Touting Trump or Hillary
Recent Comments
6 Comments | Leave a Comment
Browse Our Archives
get the latest updates from
The Chorus In The Chaos
and the Patheos
Evangelical
Channel
POPULAR AT PATHEOS Evangelical
1 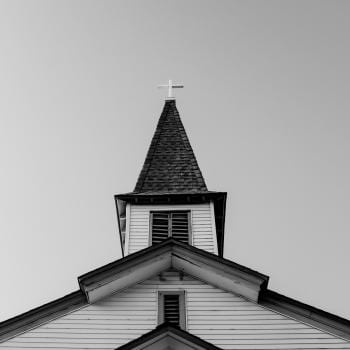