The American evangelical church has done a lot of growing up in the past few decades with regard to how we participate in culture, but our attraction to rule-keeping has been hard to shake. Even as we’ve become, in general, less defined by our cultural asceticism and prudishness, we’ve embraced another form of cultural legalism, one that marks our righteousness by the habits we cultivate, rather than the cultural works we enjoy.

For a long time, evangelicals’ attitudes toward culture were primarily legalistic. We responded to culture by developing lists of cultural works Christians must avoid: R-rated movies, post-Hays Code movies, television, The Beatles, all secular music, anything with a “beat,” Dungeons & Dragons, Harry Potter, Target and other abortion or homosexual agenda-supporting businesses, dancing, Cabbage Patch Dolls, Magic the Gathering, and so on. And then we built our own segregated subculture, which in retrospect turned out to be a ghetto (see: CCM). And then that subculture often became a parallel culture (see: Sunday School Musical).

Thanks to the efforts of Christian cultural pioneers like Francis Schaeffer, the generations of evangelicals who were hurt by this legalism, as well as the digital revolution’s democratization of the arts (which enabled independent Christian artists to compete with professional artists promoted by the Christian entertainment industry), we’ve largely grown out of a weaker understanding of culture and righteousness which focuses intensely on discerning the purity of cultural objects. We go to movie theaters, enjoy secular music, love Harry Potter, and generally shop wherever we want. However, that doesn’t mean we’ve ceased to seek after righteousness in our cultural participation.

Instead of viewing cultural works in a righteous/sinful binary, evangelicals seem to have a better grasp on Common Grace, so that we generally recognize that there is much in secular culture that is genuinely beautiful, good, and worthy of praise. And while one evangelical might have a personal conviction that seeing any movie containing profanity is a sin against his or her conscience, evangelicals in general seem less likely to confuse this conviction with God’s law and impose it upon their neighbors.

So, instead of asking the question, “Is secular music sinful to listen to?” we might ask, “Does the practice of listening to music through my headphones as I am grocery shopping edify me and bless my neighbor?”

Others have noted this shift in the Church’s cultural focus as well. In a recent article for Comment magazine, James K. A. Smith, a philosopher at Calvin College and the editor of Comment, has observed that the cultural conversation in North American Christianity has changed so that we are no longer concerned with whether Christians should participate in culture; now we desire to know “how to actually do this.”

What all of these concerns share is the belief that our practices develop into habits which shape what we love, what we desire, and how we perceive ourselves. This is the exact line of thinking that James K. A. Smith takes in his book Desiring the Kingdom: Worship, Worldview, and Cultural Formation, where he makes the argument that Christians need to put a greater emphasis on developing redemptive cultural and worship practices, rather than myopically stressing “knowledge” as the key to Christian growth and societal change.

This trend of focusing on our practices and how they affect us is a sign of maturity in the Church. It reflects a more realistic model of how people are shaped by culture. It profoundly broadens how we use our discernment. It encourages us to examine the shape and form culture takes, not just its content, so that a “parallel culture” made up of baptized and sanitized secular works no longer seems like a viable option. And it helps us move past our tendency to have a legalistic view of cultural works. However, for all of its strengths, we need to be aware that this approach to cultural participation comes with a tremendous potential for its own form of legalism.

It is very easy to slip from “Playing violent, battlefield video games trivializes warfare” to “Playing violent video games is sinful.” Or “Eating dinner together is an edifying practice” to “Whenever we watch TV and eat dinner, we are dishonoring God.” Our hearts are inclined to make any good belief into a law. We might not even use the language of transgression in discussing good habits, but the passion with which we pursue our pet practices and promote them to others could reveal a deeply held belief that the failure to adopt these practices is really a failure to honor God.

And so, what began as a good and proper attempt to discern how to love our neighbor with our iPod-listening habits soon becomes a new law by which we judge our own actions and our neighbors’. We begin to speak about “family dining” as a requirement for true Christians. We delete our Bible apps. We only buy local and fair trade products and advertise this fact with bumper stickers. We close our Facebook account. Or, maybe we don’t do anything as drastic as that, but we do look down on other believers who don’t share our convictions about the importance of simplified living or not owning a TV.

I suspect the temptation of this legalism is particularly attractive for Americans, since we already tend to idolize micromanaged living. As Charles Taylor has written in his highly influential work Sources of the Self, with the Enlightenment and Protestantism came the “affirmation of ordinary life”—this idea that what was really valuable and important and meaningful in life, the things that defined your worth, the things that justified you, were not the “big” things like baptism, but the innumerable little things that fill our days. Our style of living came to determine our worth, so that it was imperative that we be industrious, punctual, frugal, and rational even in the petty, mundane concerns of life.

In America, we have yet to shake the pull of valuing ourselves based on how well we can order and micromanage our lives. We look for the most efficient and effective methods to wash our laundry, exercise, birth children, nap, pump gas, make dinner, manage e-mails, and potty train our kids. There’s something satisfying about the prospect of winning at everything we do, even—or especially—the most trivial and basic actions. This is probably why the affirmation of ordinary life has been so attractive to people for centuries; it fills a great need for self-satisfaction and significance.

As with any good thing that we allow to enslave us, the key to avoiding the temptation of legalism as we critically evaluate our habits is to see our actions as gratuitous, rather than necessary works to earn Christ’s favor or our justification, either spiritually or socially. Of course, no one thinks to him or herself, “My impeccable and creative DYI home decorating skills justify me before the Lord,” but we might functionally and emotionally live that way, which is why it is so crucial to reevaluate these habits as gratuitous.

Gratuity here does not imply that our efforts are meaningless or unimportant. The way we shop, eat, and visit with our neighbors can have tremendous impact on our world. But this is also a losing proposition.

No matter how hard you work, you will never come close to Right Living. You will always fail to love God and your neighbor in your habits in some way. You will forget to buy the environmentally friendly laundry detergent, or you’ll find that reading the Bible on your iPad is more enjoyable, or you’ll lack time and patience to eat together every night, or you’ll prefer to text message your parents rather than call them. The more energy and passion you put into micromanaging your life to honor God, the more you will become aware that it is an impossible task.

The Good News is that your righteousness does not depend on your ability to pull off this micromanaging; it depends on the righteousness of another. So, this frees you to earnestly discern all the areas in your life where you can better love God and neighbor, not as an act of self-justification, but as a gratuity, knowing that all your efforts are works of gratitude in excess of what is required, because what is required has already been paid. Our motivation for carefully examining and improving our lives can then be a desire to love and bless others, rather than to make ourselves more culturally righteous.

This is an exciting time to be an evangelical, as we shift away from a legalistic preoccupation with uncritically condemning or embracing culture and begin to think deeply about how our cultural habits might affect us and our neighbors. Tremendous harm has come to the Church and its witness through the impoverished view of culture which was popular, if not dominant, among evangelicals through the second half of the 20th century. As the shallow view of culture loses credibility and is replaced by a more nuanced position, I expect we will see a healthier and more respected evangelical Church. But if we fail to see our efforts as gratuitous gifts, and instead treat them as the means of our righteousness, we will likely find ourselves with an evangelical culture that is no more Gospel-oriented than the morality-based culture we have just begun to leave behind.

October 19, 2012
Fathers, Love Your Children, and They May have a Healthy Sex Life
Next Post 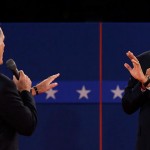 October 22, 2012 The Most Pressing Foreign Policy Issue to be Ignored in Tonight's Debate
Recent Comments
7 Comments | Leave a Comment
Browse Our Archives
get the latest from
Evangelical
Sign up for our newsletter
POPULAR AT PATHEOS Evangelical
1

Evangelicalism: Where have all the young...
Determinetruth
Related posts from Christ and Pop Culture