Is Sandy Hook a Sign that We need a Christian Culture? Or a Savior?

Is Sandy Hook a Sign that We need a Christian Culture? Or a Savior? December 17, 2012 Alan Noble

When tragedies like Sandy Hook happen, everyone looks at the event to find evidence to support their vision of the Good Life. For some, it was a sign that we need tighter gun control, while for others, a sign that we need looser gun control, or better mental health, or better school security. According to Rachel Held Evans, it’s a sign to Mike Huckabee that God abandons school children when prayer is taken out of school — and she dramatically dismisses Huckabee’s words as “bullshit”. Only, Huckabee never said that, and he didn’t even imply that God abandoned those kids because He wasn’t invited into school.

Instead, as he clarified later, Huckabee wants to argue that:

A specific act of violence is rarely the result of a specific single act of a culture that prompts it. In other words, I would never say that simply taking prayer and Bible reading from our institutions or silencing Christmas carols is the direct cause of a mass murder. That would be ludicrous and simplistic. But the cause and effect we see in the dramatic changes of what our children are capable of is a part of a cultural shift from a God-centered culture to a self-centered culture.

Carson Clark has a good, balanced look at Huckabee’s statement: “Within [a] complex schema Huckabee’s comments have merit. The key is to see them as representing one strand in that multicausal rope instead of the reason. If you interpret his comments that way, he’s not off his rocker.”

Carson has a point here that Evans unfortunately misses. If an essential part of what it means to be a Christian is to love your neighbor, then a Christian culture should produce far less violence. And conversely, a secular pluralist society could be expected to see acts of violence unrestrained by morals.

But I’d like to push back, somewhat, on Huckabee here. I’m not sure it’s helpful to use tragedies like Sandy Hook as examples of what happens when a country abandons God. First, we don’t know the counter-factual. Assume all the same variables on that day are the same except that the shooter was a Christian, or was raised in a Christian culture. Would he have still done it? We have no way of knowing. Second, a Christian culture — a culture in which Christ’s teachings are the assumed, shared moral code — does not mean that everyone is Christian. Third, even among professing Christians, there are plenty of murderers, rapists, child molesters, etc.

In other words, we really can’t say that this tragedy would not have happened if America was still distinctly Christian. (Never mind the fact that our President quoted publicly from the Bible at the Sandy Hook vigil last night.)

Even worse, arguments like Huckabee’s imply that we should be at least nominally Christian for the good of society. Follow Christ in order to have safer schools. Put the Ten Commandments up in public buildings so that our culture is more honest. While it is true that God blesses those who love Him, it’s also true that God does not promise us a prosperous life, but rather a life of suffering and persecution. Suffering like what happened in Sandy Hook Elementary School has happened before, in more “Christian” cultures.

There’s a bit of Joel Osteen’s Your Best Life [Society] Now in Huckabee’s statements. And that troubles me. But again, there is some truth to his point. I just believe it needs to be tempered with stories like the Book of Job, or the story of Cain and Abel.

If we want to see Sandy Hook as evidence of our need for Christ, we would be much better off looking towards Sufjan Stevens’ “John Wayne Gacy, Jr.”

In what I would argue is the greatest encapsulation of total depravity, Sufjan Stevens tells Gacy’s horrifying story, emphasizing his humanity. And in the end, he sings, “And in my best behavior, I am really just like him/Look beneath the floorboards for the secrets I have hid.”

This tragedy should remind us of our desperate need for saving grace. Not because Adam Lanza is the Other, i.e., a vile product of secularism which we need to be protected from by creating a Christian, moral culture. But rather, because in our best behavior, we are really just like him. Murderous people with murderous hearts. But by the Grace of God. 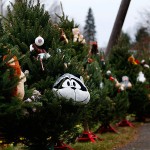 December 18, 2012 Christmas in Sandy Hook, Connecticut
Recent Comments
11 Comments | Leave a Comment
"Radford made a connection between Ender and Hitler.Another possible connection: Could Card have been referring ..."
Raymond Z ‘Ender’s Game,’ Genocide, and Moral Culpability
"Faith is the confidence that what we hope for will actually happen; it gives us ..."
Smiley M.M. Music Matters: David Bowie, Still Not ..."
""that many of us do not accept that a few cells of human DNA constitute ..."
myintx How I Changed My Mind About ..."
"No thought given to the unborn child whose life was 'silenced and oppressed'... sad."
myintx How I Changed My Mind About ..."
Browse Our Archives
get the latest from
Evangelical
Sign up for our newsletter
POPULAR AT PATHEOS Evangelical
1