Did you receive numerous lectures about the importance of wearing a dark suit for job interviews?

Did you ever buy a certain piece of clothing because you were convinced it would help you fit in?

Did you ever feel pride in wearing your team’s jersey on Friday at school?

Have you ever written off a bar as “too hipster” only because of what its patrons wore?

Have you ever felt humiliated because you realized your shirt was sheer?

Have you ever felt superior because you knew you were the most stylish person in the room?

Did you ever feel the ecstasy of wearing an affluent friend’s hand-me-downs?

Have you ever enjoyed a party mostly because you liked your outfit?

Have you ever been turned away from a restaurant because you were wearing shorts?

Have you ever worn a miniskirt to a funeral?

Did you go through a rebellious phase that manifested itself in wearing clothes your parents hated?

Were you ever embarrassed by your mother wearing clothes that were too frumpy/too tight when she picked you up from school?

Have you ever been called a gay slur because your pink shirt was deemed insufficiently masculine?

Have you ever been called a “slut” because your boat neck shirt was deemed insufficiently modest?

Do you ever judge racial minorities by their clothing? 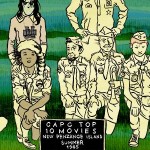 January 7, 2013 A Call for Writers
Recent Comments
0 | Leave a Comment
"Radford made a connection between Ender and Hitler.Another possible connection: Could Card have been referring ..."
Raymond Z ‘Ender’s Game,’ Genocide, and Moral Culpability
"Faith is the confidence that what we hope for will actually happen; it gives us ..."
Smiley M.M. Music Matters: David Bowie, Still Not ..."
""that many of us do not accept that a few cells of human DNA constitute ..."
myintx How I Changed My Mind About ..."
"No thought given to the unborn child whose life was 'silenced and oppressed'... sad."
myintx How I Changed My Mind About ..."
Browse Our Archives
Related posts from Christ and Pop Culture