Science Can Both Solve and Add to Our Moral Conundrums

Ah, good ol’ science… With it, we make incredible advances that aid and benefit our lives immeasurably even as we wander into one moral quagmire after another. We increase our understanding of the world around us even as we are tempted to play God in ways that ought to make us shudder. Two recent articles serve as a perfect showcase for that particular dichotomy.

In 2012, however, two teams of scientists discovered a way to transform ordinary adult skin cells into neural cells, a breakthrough that promises to completely sidestep any such controversies. Because adult cells are used, no embryos need to be sacrificed, and because skin cells are so plentiful — your body sheds about a million of them a day — it means a large pool of material with which to work. So what are some of the possibilities that we’re looking at here?

Access to large numbers of specialized cells could change how doctors study disease and how pharmacologists test drugs, which could in turn bring about new treatments tailored to individuals. It could even lead to that holy grail of medical science: the ability to grow new tissue and organs from the patient’s own cells, virtually eliminating the possibility of rejection.

So, huge medical breakthroughs and life improvements without any ethical dilemmas. Sounds like a win-win to me.

And now, the bad (or at least, the troubling and potentially-not-so-good): What if, instead of undergoing a risky procedure like amniocentesis to determine your unborn child’s risk for birth defects, you could find that out via a simple blood draw? On the surface, this seems like a no-brainer, especially if such a test doesn’t carry with it the risk of miscarriage. After all, pregnancy is a time already full of uncertainty, and more information about your unborn child’s condition is good, right? But what happens if the test comes back positive, and your unborn child has Down syndrome?

In Candace Weiss’s case, she and her husband decided to have an abortion.

Weiss terminated the pregnancy last fall at 12 and a half weeks. She and her husband hadn’t told very many people that she was pregnant, and the procedure at that stage is mercifully swift and relatively simple. Some women do not find out their babies have serious medical problems until much later in their pregnancies. At that point, many doctors don’t even perform abortions, obliging patients to travel to distant cities to get one. “It’s huge to know early on,” Weiss says. “Not that what we went through wasn’t heartbreaking, but we were able to put it behind us faster. We get to start over sooner.”

The blood draw test, called “cell-free fetal DNA testing,” is still in its early stages, but it holds great potential. As Wired‘s Erin Biba puts it:

They presage a future when we can easily scan for a range of genetic defects, from the truly devastating to the not-so-serious, allowing parents and doctors to look past a baby’s organs, beyond its cells, and down into its very DNA. Based on a small sample of a woman’s blood, the cell-free fetal DNA test gives expectant mothers an earlier (and safer) look than ever at just who it is that’s growing inside them.

Again, this seems like a good thing — at first. But what if, as in Weiss’s case, the information you receive is less-than-ideal? What do you do with such knowledge, especially if that knowledge gives you the opportunity to take steps to “start over sooner”? In some areas of America, as many as 90% of Down syndrome pregnancies already end in abortion. Which is something that even abortion advocate Alison Piepmeier, herself a mother of a child with Down syndrome, finds troubling. She writes:

The message that sometimes accompanies positive prenatal testing for Down syndrome is: “You have a defective fetus. Let’s get rid of it so you can try again.” One mother I interviewed was told by her obstetrician, “the quickest, cheapest way to solve this problem is to terminate the pregnancy.”

But that doesn’t have to be the case. The prenatal testing is not what we should question, but the assumptions that accompany it. I agree with Ms. Rapp’s call for “a more nuanced discussion.” All disabilities are not the same. If our culture assumes that across the board, a child with a disability is defective, and a problem best avoided, then we’re encouraging people who want to be parents to make a decision based on bad information. And having an abortion because of bad information is a preventable tragedy.

As the test improves and expands to look for more birth defects beyond just the “major” ones like Down syndrome, what will that lead to? Imagine being able to discover your child’s entire genetic future in a matter of days. What would you do with that sort of nigh-godlike awareness? How are you supposed to adequately and wisely process that amount of information?

I don’t want to paint an overly grim or dystopic picture here. Biba points out that some people will keep babies even after prenatal testing reveals birth defects: the earlier heads-up gives them additional time to prepare for a child with special needs. In this case, early detection of birth defects can be a very good thing as it allows people to become better educated as to how to best care for such a child.

But, as the aforementioned Down syndrome/abortion stat shows, prenatal testing is often being used as a reason to “opt out,” if you will, of raising a “defective” child. Upon receiving the knowledge, many people are making the decision, difficult and heart-wrenching though it may be, to end the child’s life because of what they’ve learned. (Such testing has caused quite a bit of controversy in Europe precisely for that reason.)

Knowledge is a powerful thing, especially when it involves helpless human beings who are utterly at our mercy. And as science allows us to acquire better, more accurate knowledge, our challenge and responsibility to use it wisely becomes all the more difficult and pressing. 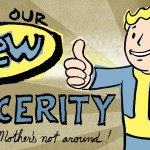 January 9, 2013
How the "New Sincerity" Changed Popular Culture
Next Post

January 9, 2013 Men Like to Look At Naked Girls On The Internet. Here's Why They Should Stop That.
Recent Comments
2 Comments | Leave a Comment
"Radford made a connection between Ender and Hitler.Another possible connection: Could Card have been referring ..."
Raymond Z ‘Ender’s Game,’ Genocide, and Moral Culpability
"Faith is the confidence that what we hope for will actually happen; it gives us ..."
Smiley M.M. Music Matters: David Bowie, Still Not ..."
""that many of us do not accept that a few cells of human DNA constitute ..."
myintx How I Changed My Mind About ..."
"No thought given to the unborn child whose life was 'silenced and oppressed'... sad."
myintx How I Changed My Mind About ..."
Browse Our Archives
Related posts from Christ and Pop Culture