For those of us with the luxury of not noticing, immigration reform is back on the political scene, and in a big way. President Obama recently made statements about his own plan, and last week, the Senate revealed an outline for proposed immigration reform that is drawing fire from both sides of the political spectrum. In a nutshell, both the president and the Senate agree on creating paths to citizenship for the current 11 million individuals living in America illegally, while focusing on additional border security measures.

The promise of bipartisan agreement in immigration reform is encouraging, but perhaps not quite so exciting as a recent gathering of Evangelical bigwigs who have come together in a similar vein. Called the Evangelical Immigration Table, this group is calling for somewhat more holistic policies in immigration reform. In an open letter to President Obama and Congress, the EIT wrote:

As evangelical Christian leaders, we call for a bipartisan solution on immigration that:

The language used in this document is exciting, elevating the current discourse to an enlightened and charitable level. In a video and challenge called “I Was a Stranger”, the EIT is asking for people to actually engage with this issue, and to step away from charged political debates.

Perhaps what I like best about this initiative—besides seeing people like Max Lucado and John Perkins together in a video for immigration reform—is the lack of dehumanizing labels (e.g., “illegal alien”). Instead, the document focuses on words included “dignity,” “family,” and “security.” Which is genius, really, because isn’t this what we all want? By tying in our own desires to those of our brothers and sisters who are residing here illgally, the EIT is forcing Christians to confront thier own attitudes towards the stranger.

No matter where you fall in the political spectrum, we could all stand to learn from this movement’s language. Here’s to Christians being at the forefront of the welcome wagon and taking our cue from Scripture rather than political climates. 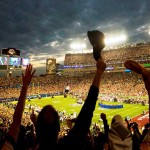 February 4, 2013
According to Andrew O'Hehir, Football Is in a Well-Deserved 'Death Spiral'
Next Post 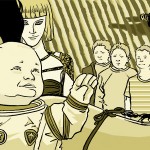 February 5, 2013 What They Want Us to Believe: We Tackle the Super Bowl Commercials Head On
Recent Comments
4 Comments | Leave a Comment
Browse Our Archives
get the latest from
Evangelical
Sign up for our newsletter
POPULAR AT PATHEOS Evangelical
1