There Are No “Good Old Days”

According to guest contributor Amber Forcey, a good man is hard to find – even one from way back when.

Among some of the charms of being a community college English teacher is the fact that my classes often include a greater population of older students, learners who have come back to school later in life. Recently, in a class discussion on American life, ideals, and culture, one of my older students raised his hand. “You know,” he sighed, “Our country isn’t the same. It’s lost its moral compass. It’s just not like the good old days.”

“The good old days.” This sentiment is repeated in a multitude of ways and places, if not verbally, then in spirit. And it’s not just the same old nostalgia-filled, walked-a-mile-uphill sighs from the older-but-wiser that we’re used to hearing, whatever the time. It’s a cultural obsession.

A recent L.A. Times television article headlining “the good old days are hot again,” cites shows like “Downton Abbey” and “Mad Men” and recent movie theater hits like Argo, Lincoln, and Django Unchained, stating that “we are once again captivated by the ability to discover who we are by examining, condemning and forgiving who we once were.” However, most of “examining” consists of sighing over glamorous by-gone styles and manners; there’s little “condemning” in our nostalgic re-hashing of a time gone by.

Take “Downton Abbey” for example. The hair! Those clothes! That house! When men were gentleman, women were ladies, and everyone came to dinner in a jacket. We shake our heads in wonder at Carson the butler’s gruff dismissal of any modern convenience (electricity, toasters, etc.), as cute and quaint; his reactions, while laughable, evoke a sense of “Oh, what a simple and carefree time!” But the real horrors of the time – the Titanic sinking, a World War, the Spanish flu – seem to serve mostly as fodder for the characters’ personal dramas, not as an honest depiction of the problems of this time. However, a careful reading of any history textbook – or solid work of 20th century British literature – will reveal that this was time and place of great upheaval, one plagued with war, disease, and its own versions of “crimes against humanity,” not to mention the debasing treatment of women and minorities throughout most of the western world. We dream nostalgically about this time as we watch; but, if we are truly aware of the evils and trouble of these decades, given the option, none of us would chose to revert back to such a time.

Of course, the best of these shows and films, while still “glitzy” in their portrayal of a given time period, don’t shy away from its real brokenness and evil. “Mad Men” does this particularly well. In the early seasons, we’re dazzled by the handsome men (was there ever a more dashing TV figure than Don Draper?) and beautiful women, the lovely fashion and flashy accessories. However, as the show’s creator Matt Weiner has said, actions have consequences, and the consequences of these characters’ actions are real and profound. We quickly discover that under the façade of Betty’s perfect housewife set-up is a terribly frustrated, bored, petty, selfish, and malicious woman. Her family – and society – has prepped her for a life of small service, of family dinners and house parties, the arm-candy for her handsome but often cruel husband. When she can no longer endure the trap her life has set for her, she lashes out cruelly (mostly at her children) and trades husbands, mistakenly believing her problem to be her spouse, not the small and restrictive life she’s been groomed to lead.

And Betty’s frustrations aren’t merely her own; they are indicative of an era. Jessica Mann in her article last spring for The Guardian details her experiences as a housewife in 1960 after citing a recent survey in which young mothers “long to put the clock back to the postwar years when life seemed prettier and nicer,” and have “nostalgic fantasies about the pre-women’s liberation era when mothers were never expected to juggle jobs and families.” Mann, however, argues that “[a] married woman’s life was easier only in the sense that a prisoner’s life is easy – difficult choices were made for you . . . But for every working mother now who fantasizes about giving up work, there must have been a ‘captive wife’ then, who felt utterly bored and frustrated by full-time domesticity.” Americans often envision this time particularly (post war 1950’s) as our country’s “golden age,” filled with smiling, wholesome families. However, under those grins boiled terrible gender and family tensions and racial inequality. It was a generation scarred by two World Wars, and modern consumerism and convenience was unable to ease their pains – indeed, it only added to them.

Interestingly, this issue – a dishonest romanticizing of the past – is one dealt with by one of contemporary fiction’s most well-known writers, Flannery O’Connor. O’Connor was a devout Catholic in a predominantly Protestant South in the 1950’s and 60’s. She had a particular vantage point, one of both insider and outsider, and this perspective, in addition to her insights as a writer and thoughtful believer, allowed her to detail a problem that apparently plagued her time and seems still to plague ours. In one of her most famous short stories, “A Good Man is Hard to Find,” she tells the story of a grandmother attempting to manipulate her family to “visit some of her connections” in Tennessee for vacation, the state of her youth, instead of Florida. The Grandmother, among her other flaws, suffers from a romanticized view of the past, namely her past. “In my time,” she remarks at one point in the tale, “children were more respectful of their native states and their parents and everything else. People did right then.” Immediately after her comments, however, she turns to point out a poor African-American child as the family passes him in their car, using a derogatory slur to identify him, and saying “If I could paint, I’d paint that picture,” objectifying and degrading the child as a “thing,” rather than a human being in need. The Grandmother’s “good old days” attitude continues as the family stops for lunch at “Red Sammy’s.” Red Sammy and the Grandmother strike up a conversation in which Red Sammy comments, “These days you don’t know who to trust.” “People are certainly not nice like they used to be,” the Grandmother responds. Their dialogue culminates in Red Sammy’s remark, “A good man is hard to find,” to which the Grandmother heartily agrees. She and Red Sammy, of the “good old days,” are implicitly the “good people” that can’t be found “nowadays.”

The irony of the story and of the Grandmother’s “good old days” remarks is emphasized at the end of the story when the family runs into a criminal, the Misfit. The encounter is full of profound insights and ironies, but the Grandmother’s nostalgically comfortable self-righteousness is utterly shaken when she comes face to face with a broken and evil man who declares that:

“Jesus was the only One that ever raised the dead . . . and He shouldn’t have done it. He thrown everything off balance. If He did what He said, then it’s nothing for you to do but throw away everything and follow Him, and if He didn’t then it’s nothing for you to do but enjoy the few minutes you got left the best way you can – by killing somebody or burning down his house or doing some other meanness to him. No pleasure but meanness.”

In the instant before her death, the Grandmother has a moment of revelation – the Misfit, a murdering criminal, is her “child,” a reflection of herself and her own wickedness, a product of her own hypocrisy and self-righteousness. The irony of the tale is that a good man is hard to find, not because of the times, but because there are no good men – then or now – except for One.

Essentially, a “good old days” response to the problems of our time is a form of blind self-righteousness, an attitude that says we and our time (or the time we yearn after) would have never committed the same errors of the present age; people were at one time good (or polite, kind, safe, etc.), but no longer. However, as Christians, we cannot accept this attitude. First of all, we must continually be aware of and preaching that since the Fall, all men are broken and evil, from all times and places. The pendulum of culture and civilization swings from one extreme to another, but each time, each era and century and decade, has its flaws, most of which are unrecognized by those within it. As believers, we must do the work of first reminding ourselves of our own personal and cultural brokenness (both in the present and the past) and of working to make ourselves aware of the real vices of our own age, vices which we are most likely unaware of. Second, we must work to rid ourselves of this subtle and dangerous form of self-righteousness, one that masks itself in fuzzy nostalgia. We must recognize that all people, past and present, including (and especially) ourselves, are all Misfits in need of the only One who ever raised the dead.

Amber Forcey lives in Fredericksburg, Virginia with her husband of almost three years and teaches college writing and literature online and at a local community college. She’s very grateful for those friends and teachers who taught her to see beautiful things in literature and life. When she’s not reading or planning class, she likes to go visit her very large extended family.

February 15, 2013
Is Christian Fashion Week A Good Idea?
Next Post 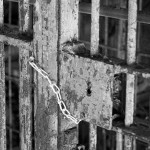 February 18, 2013 What Would You Do to Get into Prison?
Recent Comments
11 Comments | Leave a Comment
"Radford made a connection between Ender and Hitler.Another possible connection: Could Card have been referring ..."
Raymond Z ‘Ender’s Game,’ Genocide, and Moral Culpability
"Faith is the confidence that what we hope for will actually happen; it gives us ..."
Smiley M.M. Music Matters: David Bowie, Still Not ..."
""that many of us do not accept that a few cells of human DNA constitute ..."
myintx How I Changed My Mind About ..."
"No thought given to the unborn child whose life was 'silenced and oppressed'... sad."
myintx How I Changed My Mind About ..."
Browse Our Archives
Related posts from Christ and Pop Culture