The Great Need For Wisdom In International Adoptions

Within the last few years, adoption has become something of a “hot button” topic amongst the Church. At the very least, it seems like more Christians are talking about it more often. Russell D. Moore (whose book Adopted for Life could be considered something of a “Christian adoption” manifesto), is one of the leading lights in this new “movement.” Earlier this year, Christianity Today profiled Moore regarding his passion for adoption, and for encouraging fellow Christians to become interested in adoption. For Moore, and those like him, adoption is a concrete way to live out the Gospel, to obey the Bible’s orders to care for “the fatherless and the widow,” and to manifest the Bible’s claims that we, ourselves, are the adopted sons and daughters of God.

However, there are those who see a dark side to this upswing in Christian interest in adoption. Earlier this month, Mother Jones posted Kathryn Joyce’s “Orphan Fever: The Evangelical Movement’s Adoption Obsession,” an in-depth article which looks at instances where Christian “orphan theology” has led to unforeseen problems and challenges, failed adoptions, abuse, and abandonment, specifically in the case of children adopted from Liberia. Essentially, Joyce argues, Christians were blinded by their “fervor,” got in over their heads, and were ill-prepared to deal with the challenges inherent to international adoptions. (Joyce’s recently released book, The Child Catchers: Rescue, Trafficking, and the New Gospel of Adoption, explores this topic in greater depth.)

Responses to Joyce’s article from within Christendom have been unsurprisingly negative, with Ed Stetzer even calling her article “a hit-and-run journalistic hatchet job.” However, I’d like to refer you to a different type of response written by my friend Maralee Bradley (whom you might recognize from her piece on last year’s Rob Parker controversy). Titled “Evangelicals and Foreign Adoption,” Maralee’s piece takes a slightly different approach to responding to Joyce’s article. Although she pushes back against some of Joyce’s criticisms, and affirms that Christians do have a Biblical mandate to care for orphans and other abandoned children, she also writes that stories like those contained in Joyce’s article need to be heard and considered, however uncomfortable they might be.

I was floored by the expectations of some adoptive parents that the kids who grew up in this environment of constant fear and instability could be parented in exactly the same way they were currently parenting their biological children. The problems some of these children brought with them were serious and severe and made complete sense in light of what they had experienced. Adoptive parents should have been prepared for the worst, but as Joyce’s article points out, many of them were caught off guard.

While Joyce’s article may seek to be an indictment of the evangelical adoption movement, I think the story of adoptions from Liberia has value as a warning. As much as we’d like to, we can’t sweep it under the rug. Rather, we need to learn from the mistakes that have been made by agencies and parents filled with hope and good intentions.

Christians absolutely need to be caring for orphans. If we believe in encouraging women to choose life, we need to match our fervor for picket lines, protests, and politics with a fervor for foster kids and adoption. After the adoption of our son from Liberia we adopted two children through foster care and have found a tremendous need for quality foster parents to step up and love these kids. It has been surprising to me to encounter families who are ready to take on the unknowns of an institutionalized child from another country, but are reticent to care for the child next door because of their imagined problems. We should be concerned about the needs of the children in our community and the orphans around the world because their souls matter equally.

Maralee concludes her article by providing several tips for Christians whose hearts may have been touched by the plight of orphans like those in Liberia, and who want to get involved somehow. For example:

Examine your motives. Please don’t adopt if your motivation is to “rescue” a child, to appear extra holy, or to be involved in the latest evangelical trend. These reasons will not sustain you when the adoption road gets rough. Adoption is a lifetime commitment to a child who may have difficult needs and may reject you and your love. It should be a decision made because you want to make a lifetime commitment to a child no matter what their issues, not merely because you see adoption as a worthy cause. Think about it — who among us would want to know your spouse married you because he thought you needed rescuing? We marry for better or worse and try to make that decision with wise counsel and a clear head, understanding that difficult times may come. Adoption should be no different.

The Church has been caring for the world’s abandoned children since its earliest days, when Christians living under the Roman Empire rescued children left to die (a common practice in the ancient world). Caring for the world’s outcast and abandoned provides a powerful testimony that counters the ways of the world, withs preoccupation on strength and power. However, as Maralee points out, it is something that must be pursued and practiced with great wisdom, lest our efforts to help the fatherless cause them more harm than good.

April 24, 2013
Melissa Harris-Perry Wants Your Kids! Or Does She?
Next Post 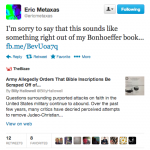 April 25, 2013 Citizenship Confusion: Do We Need the Word of God on Our Guns?
Recent Comments
0 | Leave a Comment
Browse Our Archives
get the latest from
Evangelical
Sign up for our newsletter
POPULAR AT PATHEOS Evangelical
1

Rethinking Grace
What does it mean to receive the grace of God? What does...
view all Evangelical blogs
What Are Your Thoughts?leave a comment
Copyright 2008-2021, Patheos. All rights reserved.