Can Heterosexuals Learn from Gay Marriage?

Recently, I was perusing over at The Atlantic, and I came across an article called “The Gay Guide to Married Bliss” by Liz Mundy. In the article, she argues that heterosexual couples could stand to learn a few things from homosexual couples in relation to marital roles.

Mundy lists three “rules” that she thinks are present and praised in homosexual couples.

Rule 1: Negotiate in advance who will take out the trash and who will clean the bathroom. Mundy writes that homosexual couples do not operate along the same gender-specific task list that traditional heterosexual couples use. Because I’m a woman, it’s assumed that I will be the one to cook our meals and clean our house and wash our clothes. But in a homosexual couple, Mundy points out that many of these daily tasks are divided up more evenly, based on preferences and giftedness.

I understand how this could be desired in marriage. Oftentimes, I focus inward and think Mike does this and I do this instead of thinking that what we do daily in our marriage is done with the same goal in mind; we are on the same team. We aren’t merely getting things done and following the rules of who is to get them done; we are, by God’s grace, growing our life together. With that in mind, I am helped when my husband cooks dinner for us. It didn’t happen because we woke up that morning and drew straws to see who was getting the “dinner task.” Mike recognized that helping to get dinner started before I got home would be a kind gesture, even if that wasn’t his responsibility that day.

Rule 2: When it comes to parenting, a 50/50 split isn’t necessarily best. In the realms of childcare and “bread-winning,” homosexual couples do not yield to their gender to know what they are supposed to do, something heterosexual couples should see and make note of, Mundy claims. Research out of the University of Virginia shows that the involvement of homosexual couples with children is greater than that of heterosexual couples, primarily because the roles are not divided based on gender. Lesbian mothers and gay fathers are seen as very involved with their children, whereas the heterosexual wife would greatly desire more parental involvement from her straight husband.

My husband and I do not have children yet. We both work full-time and love what we do. We are currently a dual-income family. While I hope I am able to stay at home with our children one day, I understand that whatever is best for our family is most important. If that means I am to keep working to care for our family, I will work, even if the traditional marriage model is for the wife to stay at home.

Rule 3: Don’t want a divorce? Don’t marry a woman. A group of homosexual and heterosexual couples were interviewed about how they resolve conflict. The research showed that homosexual couples were joyful and less-irritated in conflict, while the heterosexual couples admitted to struggles in conflict resolution. It comes down to a belief of Mundy’s: straight woman see themselves as less powerful than men, and therein lies the relational hostility. Whether or not these couples have children plays a role in how conflict is solved; the research suggests that lesbian couples with no children are happier than other couples, gay or straight. Mundy cited Swedish research that shows lesbian couples having a higher level of perfectionism in their relationships. Rather than individuals in our culture seeing woman as nurturing care-givers, they are choosing to see them as nagging, needy, weak, and sadly, a threat.

If couples are tired traditional marriage roles, I can understand how new rules could be liberating for them.

If we make marriage to be about three rules for creating bliss, what do you do when someone gives up working towards that bliss?

As the article ends, Mundy expresses her opinion that traditional marriage is no more. What we do have is, at best, a relationship that remains so long as both parties are happy with one another. What we cannot deny with an article like this is that our culture has a shallow view of marriage.

This morning, I got back home from a run and Mike was getting ready for work. He had on his Carhartt overalls. I asked why he chose that particular article of clothing for work.

“Is that why you married me?”

Mike, half-listening said, “What did I say?”

“‘Because you like them.’ Is that why you married me?”

I was glad to hear him say that. Because there is much more to marriage than keeping the bliss and getting things done. Even on the hardest days, marriage is not just a long slog until death, and it’s not so simple a thing as who does what. Yes, marriage can be difficult, the fight can be tiring, and the movements forward can feel like a crawl. But even in the difficult days, I have hope because our marriage is not just about us. It’s about the gospel. Our marriage covenant is a picture of the covenant that God has with his people. An imperfect people that Christ served, gave His life for, and rose from the dead for. In our marriages we extend to our spouse love, grace, forgiveness, and long-suffering. I am so thankful that the model of our marriage does not rest in what we are to do, but what has been done for us in and through Jesus. 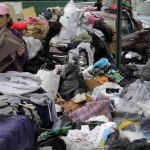 June 6, 2013 ELSEWHERE: How Have Movies Poked Fun At Religion?
Recent Comments
0 | Leave a Comment
"Radford made a connection between Ender and Hitler.Another possible connection: Could Card have been referring ..."
Raymond Z ‘Ender’s Game,’ Genocide, and Moral Culpability
"Faith is the confidence that what we hope for will actually happen; it gives us ..."
Smiley M.M. Music Matters: David Bowie, Still Not ..."
""that many of us do not accept that a few cells of human DNA constitute ..."
myintx How I Changed My Mind About ..."
"No thought given to the unborn child whose life was 'silenced and oppressed'... sad."
myintx How I Changed My Mind About ..."
Browse Our Archives
get the latest from
Evangelical
Sign up for our newsletter
POPULAR AT PATHEOS Evangelical
1

Yes, Canada is Persecuting the Brethren
The Chorus In The Chaos
Related posts from Christ and Pop Culture