I was fourteen when I first heard Jason Isbell. When he was still with the Drive-By Truckers in 2004, “Goddamn Lonely Love” was on one of those CDs that used to come good music magazines. I knew I had found something special. For a teenager looking for a world to relate to, Jason Isbell’s songs were just what I didn’t know I was looking for.

Isbell is an unusual kind of songwriter. Starting out with the Drive-By Truckers a little over a decade ago, Isbell made a name for himself writing songs that have drawn parallels to Faulkner and Cormac McCarthy in scope and content. His songs are character-driven stories, giving ordinary life extraordinary beauty.

He left the Drive-By Truckers in 2007 and I lost track of him for a couple of years. I was still regularly listening to DBT albums The Dirty South and Decoration Day, but Isbell was off my radar. Then in spring of 2011 my dad lent me his new copy of Here We Rest, Isbell’s fourth solo album. He still hasn’t gotten it back. Here We Rest became one of my favorite records of 2011 and marked Isbell’s return to Drive-By Truckers form. My wife still walks around the house singing “Alabama Pines.”

That summer I got the chance to see Isbell live. It was on a Tuesday night in Bloomington, Illinois, in a mostly empty venue (there was a tornado warning that night) and it was the best show I’ve ever seen.

At the time, Isbell was still “that guy from the Truckers” to most of the alt-country world. But these days Isbell has become, according to the New York Times (and myself), one of the best stories American must has to tell in 2013.

In his Drive-By Trucker-era song, “Danko/Manuel,” about the band and life on the road, he saw where he was going. He sings,

“They say Danko would’ve sounded just like me/ Is that the man I want to be?”

And finally Isbell has decided that it isn’t. Jason Isbell has become a new man.

The restoration of Jason Isbell is a story worthy of, well, a Jason Isbell song. In January of 2012, with the help of now-wife Amanda Shires and friend/alt-country hero Ryan Adams, he entered rehab to kick his whiskey habit (when I saw him in 2011, Isbell and his band finished a handle of Jack on stage).  He came out of rehab a sober, mature, and newly-engaged adult. Then, a few months sober and four days before his wedding day, he spent three straight days in a studio recording a new album. That album, Southeastern is his most vulnerable, complete work to date.

On Southeastern, which comes out Tuesday, Isbell is spinning the same narrative tapestries but this time has taken to a new subject matter: himself. Southeastern has rightfully been compared to Springsteen’s Tunnel of Love as a maturing and a softening of the great alt-country songwriter. Isbell has found himself and softened up. His new songs tackle issues of change and intimacy with characteristic literary aptitude.

“There’s a man who walks beside me, it’s the man I used to be/ And I wonder if she sees him and confuses him with me”

Isbell isn’t a Christian, but Southeastern’s openness, vulnerability, and humble tone are a reflection of Sermon On The Mount-like sensibilities. The profound humility that comes through songs like “Live Oak” and “Cover Me Up” have an almost (sometimes overt) spiritual weakness about them. All of this is indicative of Isbell finding his new identity in a Christian way, through vulnerability and not strength.

There is an emotional maturity to his songs that bring the stories closer to home, a precarious place to sing about. I don’t think pre-Southeastern Isbell could sing a song like “Elephant,” a gut wrenching narrative about dying of cancer (that makes me cry every time I listen to it), because that Isbell wasn’t the same man as he is today.

But this article isn’t a formal “review.” I’m still processing this album, still allowing myself the emotions that are needed to hear this album as it’s meant to be heard. With that said, this is just the album I needed at this point in my life. I’m a newly married man trying to face the big, intimidating world without losing passion, idealism, and emotion. But when I saw Isbell in 2011 I was just a kid in the midst of a crappy relationship. When he sang my favorite line in “Codeine,”

I swear Isbell looked right at me and smiled as I mouthed the words. It’s like we were going through it together. Now we are both married men, deliberately looking responsibility in the eye. Maybe if he rolls back through my town, he’d knowingly nod to me when he sings “Different Days,”

“Jesus loves the sinner/ But the highway loves the sin / My daddy told me, I believe told me true/ That the right things are always the hardest things to do”

Southeastern comes out this week and until then is streaming free right now at MTV Hive. Seriously, go get this one. 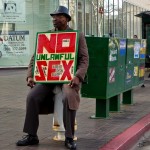 June 10, 2013 Rev. is a Poignant Portrayal of the Life of the Church
Recent Comments
0 | Leave a Comment
Browse Our Archives
get the latest from
Evangelical
Sign up for our newsletter
POPULAR AT PATHEOS Evangelical
1