“You’re gonna like the way you look. I guarantee it.”

Anyone who has watched sports on TV in the past 25 years can hear Men’s Wearhouse founder George Zimmer pitching his company’s suits in his distinctive, gravelly baritone. Men’s Wearhouse, one of the largest men’s specialty clothing stores in the country, has been a fixture of the menswear market for decades, and Zimmer has been the face of the company the whole time. He has built Men’s Wearhouse an image of caring for their customers’ happiness and satisfaction, of being a trustworthy place where men can be confident they’ll walk out looking good for not much money.

Men’s Wearhouse recently announced that Zimmer has been fired from his position as executive chairman, without giving any specifics as to why. Zimmer released a statement in response, saying his concerns about the direction of the company had been inappropriately silenced. Analysts say that, though Zimmer had been slowly moving toward retirement in recent years, he’d been trying to retain control and that led to the conflict with the Men’s Wearhouse board.

I’m a bit surprised at how much this news saddens me. I don’t have any great affection for Men’s Wearhouse itself—as long as I can remember, I’ve thought of them as offering poorly made, ill-fitting suits and overcharging men for them. If my own attitude is anything to go by, the board may be justified worrying the company wasn’t appealing well to the younger generation. And yet, it does seem a shame to me that a company could so abruptly discard a man who was its public face, who had given his entire career to building the company and making it a success. George Zimmer was Men’s Wearhouse.

Public corporations are driven by one priority: maximizing value for their shareholders. They’re legally obliged to act in shareholders’ best interests, and that obligation exists to prevent corruption and fraud. But honoring it sometimes comes at a cost to the lives and relationships of the people who work for a company. We may not feel as sorry for a millionaire like Zimmer as for the average worker laid off because his position was outsourced, but depriving a man of pride in what he’s given his life to build is still a bit callous.

We don’t know the whole story here; it’s possible Zimmer agreed to step down and then didn’t follow through. And even if Zimmer was wronged, as he says, that doesn’t mean the whole structure of corporate capitalism is evil. It is, though, a reminder that relationships are important, even in business, and the people who run companies should respect their employees and protect their dignity even as they do what’s necessary to make an honest profit.

I’ll be interested to see if Men’s Wearhouse manages to capture new, younger customers with more stylish, better-quality clothes. Maybe they’ll even entice me. But on a lazy Sunday afternoon, when a MW commercial comes on during a football game, I’m going to miss that comforting baritone and George Zimmer’s smiling image. I guarantee it. 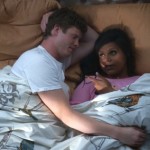 June 24, 2013
What's Up With The Mindy Project's Sexy Christian Minister?
Next Post

June 24, 2013 ELSEWHERE: Love and Marriage: Two Things We Don't Understand
Recent Comments
0 | Leave a Comment
"Radford made a connection between Ender and Hitler.Another possible connection: Could Card have been referring ..."
Raymond Z ‘Ender’s Game,’ Genocide, and Moral Culpability
"Faith is the confidence that what we hope for will actually happen; it gives us ..."
Smiley M.M. Music Matters: David Bowie, Still Not ..."
""that many of us do not accept that a few cells of human DNA constitute ..."
myintx How I Changed My Mind About ..."
"No thought given to the unborn child whose life was 'silenced and oppressed'... sad."
myintx How I Changed My Mind About ..."
Browse Our Archives
get the latest from
Evangelical
Sign up for our newsletter
POPULAR AT PATHEOS Evangelical
1

Are You a 'Judgmental' Christian? Good.
The Chorus In The Chaos
Related posts from Christ and Pop Culture

Is it better to burn out, or to...
I've been behind some big ideas -- only to see them flame...
view all Evangelical blogs
What Are Your Thoughts?leave a comment
Copyright 2008-2021, Patheos. All rights reserved.