How the Supreme Court ‘Decided’ the State of Race in America

Is Jim Crow dead? Do we live in a post-racial America? The Supreme Court seems to be saying: “Officially, yes.”

The Civil War ended with the surrender of the Confederate States of America. The American South went from holding human beings as property to a regime of formal equality with the stroke of a pen—but no one was under the illusion that a culture could change so quickly. The Union Army occupied the South in order to implement some measure of freedom and equality for the newly freed blacks there. Armed occupation could last only so long for a people calling themselves One Nation, but everyone knew the black man was not truly free, not so long as juries were all white and blacks were excluded from the ballot box.

Racial distrust, its even uglier cousin white supremacy, and other (sometimes benign) social pressures led the South to resist the egalitarianism of Radical Republicans. Southern states were unwilling to approve the Fourteenth Amendment, so Congress passed a (rather problematic) law imposing martial law and refusing to readmit “the rebel states” until the Amendment passed. The Amendment imposed due process and equal protection requirements on all states and empowered Congress to enforce these measures.

There have always been at least two conceptions of Equal Protection. First is the “colorblindness” model. The basic conception is that the government cannot make arbitrary distinctions, that it has to treat like situations alike. This concept was tested in race cases, though, where treating everyone formally equally was either a fig-leaf for discrimination or was so obviously harmful to one race that it calls to mind the fable of the fox and the stork.

The other conception is to think of the Fourteenth Amendment as designed to eliminate the effects of slavery, embodying our nation’s commitment to the ideal that there is no subordinate class of people. In The Slaughterhouse Cases (1873), the Court said that the Fourteenth Amendment (along with the Thirteenth and Fifteenth) was enacted for “the freedom of the slave race, the security and firm establishment of that freedom, and the protection of the newly-made freeman and citizen from the oppressions of those who had formerly exercised unlimited dominion over him.” This is sometimes called the “anti-caste” principle.

The short version of the law is this: If a law uses race as a classification, or deals with historically “touchy” areas of law (like voting), it gets held to a much stricter standard.

Two high-profile cases announced last week challenged both these practices as unconstitutional. While these cases address different legal issues, the common theme in them is that we’ve come a long way since slavery and what was once justified to undo that legacy is now improper. The Court embraced that theme in both cases, marking a major shift in constitutional law regarding race. An early case famously argued that the Reconstruction amendments “[clothe] Congress with power to pass all laws necessary and proper for abolishing all badges and incidents of slavery.” The Court now seems to be saying that this objective has been formally achieved and all of our other aspirations of equality must be accomplished through the old-fashioned way of living alongside one another.

The first case, Fisher v. University of Texas at Austin, claimed that affirmative action programs are racially discriminatory. Usually, the two conceptions of equal protection—colorblindness and anti-caste—go in the same direction. Basically, the law means “don’t be racist.” But affirmative action separates them. When a school or employer gives special preferences to minorities, it is making a distinction based on race. That’s not equality! But it is also trying to ensure there is no inferior class of people, by making classrooms and workplaces diverse and providing access to opportunities disproportionately enjoyed by whites. That’s equality!

Abigail Fisher is a white Texan who was denied admission to the University of Texas. She claims that she was discriminated against on the basis of her race because less qualified minorities were admitted. Fisher argues that UT’s policy cannot pass strict scrutiny because “racial demographics and classroom diversity” are not compelling governmental interests. Moreover, the Top-10% law in Texas grants automatic admission to all high school students who graduate in the top 10 percent of their class. Fisher’s argument is that this law on its own had already ensured great diversity, so UT’s additional racial preferences were unnecessary and therefore not narrowly tailored.

The Court was forced to decide a problem it had created for itself in 2003, when the University of Michigan was sued in two separate cases with opposite results. The Court held then that the undergraduate admissions policy of giving 20 points (out of 100 possible) to all minority students was impermissible. But in a companion case, the Court said that the law school’s policy of giving a boost to minority candidates was acceptable because achieving a “critical mass” of minority students is a compelling interest for an elite public law school. Courts say a lot of things when they decide cases, but apparently the line is somewhere between a 20 percent boost and whatever Michigan Law was doing.

Supporters of the policy argued that racial minorities are still disadvantaged and the whole student body suffers from a lack of diversity. The Court, in what might be seen as a dodge, emphasized the importance of avoiding racial classifications whenever possible and remanded the case to the Fifth Circuit to apply a stricter level of scrutiny.

The second case challenged the provision in the Voting Rights Act that requires certain states, counties, and towns to receive permission for any change to their voting laws.

Section 5 of the VRA required certain jurisdictions to get preclearance from the U.S. Department of Justice anytime they make any law or regulation that affects voting. Covered jurisdictions were those that had less than 50 percent voter registration in 1960/1964. This effectively included the entire South when it was enacted. Congress has repeatedly re-enacted the law, each time for an ostensibly temporary term. Last time it did so was in 2006, when it extended the provision for 25 years.

The law is complex. But the main challenge is easy enough to understand. The preclearance provisions were always supposed to be temporary, but Congress keeps re-extending them. Covered jurisdictions are still determined based on voter registration levels from 1972 (per the reauthorization in 1975). Shelby County, Alabama, argued that this improperly infringes on the power of the states to regulate their elections.

Supporters of the renewed Section 5 argued that the law is still necessary. They further argued that Congress determined it was necessary and that the Court has no business challenging that determination. Shelby County responded to this by saying that Section 5 has always been an unusual exercise of Congressional power and that it can only be justified by the special circumstances that no longer exist. The Supreme Court agreed with Shelby County, striking down Section 5’s coverage formula but leaving open the possibility for Congress to update it to match current voting practices.

The combined message of these cases is that America is tainted with a history of racial inequality, but that history cannot eternally justify extraordinary measures. Classifying on the basis of race is presumptively wrong, but it was tolerable to undo the effects of past discrimination. Likewise, singling out some states and counties for harsher treatment of their voting laws is problematic in our federal system and must be carefully supported by current realities. Singling out states that were obviously racist 50 years ago cannot do the trick.

There’s something quite relational about this message. Undeniably, racism still exists and still afflicts many Americans—those who seize on Fisher and Shelby County to argue otherwise are wrong. But so are those who cry out that we are on the way back to Jim Crow. Discriminatory laws are still unconstitutional and illegal. It is still impermissible for the state to mistreat people based on their race. These are choices we have made, and they are part of our constitution and our Constitution. We have knit this into the fabric of our nation that our law does not regard the color of a man’s skin.

What has changed with these ideas is how we live those ideals. The whole idea of Union, for which President Lincoln was willing to send hundreds of thousands of Americans to their deaths, is that we are one nation, one people. Slavery and the century of discord that followed made this a distant ideal for most of our history. But if we’re serious about union and unity, we must eventually try to live in political community like we mean it. 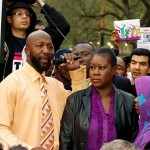 July 17, 2013 Where are all the Protests over Black-on-Black Violence?
Recent Comments
0 | Leave a Comment
Browse Our Archives
Related posts from Christ and Pop Culture