A great many Christians are dismayed with the recent SCOTUS decisions regarding gay marriage.  Their dismay is no surprise to anyone. What doesn’t seem as clearly understood is exactly why. While same-sex marriage advocates might like to chalk it up to simple intolerance, and opponents, to a pure concern for moral righteousness, the situation seems a bit more complex.

Scrolling through my Facebook feed,  Twitter threads, reading various pieces on the subject, and processing the reactions of friends and family, I’ve noticed four main recurring themes, although there are surely more, in Christian concern about the decisions. Two are legitimate and two ought to be repented of. It seems constructive, both for understanding dialogue and Christian growth, to briefly review them.

Repent!
Bigotry – I don’t think that most of the people who voted against Obama did it because they’re racists. If the internet is any indication, though, a few of them probably are. In the same way, I don’t actually think bigotry drives most Christians to be dismayed at the Court’s decisions last week. Same-sex marriage proponents who claim this are guilty of myopia and uncharity (sadly, sometimes from past hurtful experiences at the hands of Christians). That being said, imagining that a bigoted dislike and simple “ick” factor might well be at work at some level for at least a small minority isn’t very difficult.

If your only reason for opposing same-sex marriage or homosexual activity in general is the inchoate “ick” factor, that will quickly change once you meet a very nice gay couple. They do exist, you know, and can be quite lovely. In fact, it wouldn’t surprise me at all, if this is one of the factors at work in the rapid sea-change of public opinion on the subject; a great many people had no principled, moral objections to same-sex marriage beyond the simple “ick” factor. Christian moral and legal stances must be rooted in something far deeper than discomfort.

Americanism – Another bad reason for concern is one that I’ve only recently put my finger on: the heresy of Americanism. Peter Leithart identifies “Americanism”, not as a simple love for America, but the heretical theology that identifies America with God’s New Israel, the great hope for the world. Rarely found in its pure form, it infects large swaths of American Christianity; this belief that God has chosen America to proclaim, indeed, to be the agent of the Gospel of America: a message of freedom, democracy, and capitalism. This belief is not a simple trust in God’s providential ordering of the nations, but a sense of special election of the United States analagous to his election of Christ or the Church.

Of course, this is where despair comes in. The corollary of this heretical belief in our special election is that any moral degeneration represents a sort of failure of our national covenant and a threat to our messianic hopes and dreams. A great deal of the hand-wringing we’re seeing in some circles appears rooted in a false, Americanist eschatology in which our nation’s pure, Christian birth as a nation is now entering a debauched adolescence, or possible mid-life crisis, depending on how long a view of history one takes, which threatens the existence of the Church. It would take too long to respond to this, but it bears repeating that Jesus Christ is Lord of the world and the Church is to place her hopes wholly in the Messiah who has already been crucified and risen. His promises that the gates of Hades shall not prevail against her aren’t cheap talk (Matt. 16:18). While history matters, and laws have consequences, the Gospel does not hang on America.

You’ve Got a Point There
Concerns For the Common Good – A number of Christians, possibly the majority, are at least partially concerned with the common good. Whether due to natural law arguments, or convinced by revelation that violating God’s rhythm for the cosmos is bad for society, they legitimately think that ensconcing a modern, consent-based genderless definition of marriage into law will have far-reaching negative political and social repercussions beyond the fact that Jim and Joe get husbands with health benefits. No, this is not some irrational terror that as soon as same-sex marriage is legalized, gays will come stampeding into straight bedrooms and making off with unsuspecting heterosexuals in the night.

In the same way that the institution of no-fault divorce represented and instituted a shift in our understanding of marriage bringing about long-term consequences still with us, many conservatives see the legalization of same-sex marriage playing out in the same way. Same-sex marriage proponents may not find these arguments convincing (for those who haven’t read any, Alastair Roberts has an excellent summary), or, admitting that changes are coming, don’t see them as negative. That doesn’t mean their counterparts haven’t been convinced of them in good faith, though. Many Christians’ concern is one rooted in a deep respect for the created reality of history, law, and community that shouldn’t be written off as thinly-disguised hatred.

Religious Liberty – Finally, for some the main issue of concern is the possible threat to religious liberty. Special creativity isn’t required to see how gay marriage and gay rights might be pitted against the religious liberties of Christians, Jews, and Muslims whose religious beliefs entail a moral rejection of homosexual behavior–especially when the majority opinion of the court simply echoed the rhetoric of activists. Even before this there have been reports of Catholic adoption agencies losing state funding and Christian private businesses being sued for violation of non-discrimination laws. Challenges to faith-based hiring restrictions and free speech in churches are possibly not far behind as they have appeared already in the UK, Canada, and Europe.

I’m not one given to Orwellian worries of totalitarianism but it’s not improbable that preaching the back half of Romans 1, in even the mildest tones, could potentially become a legal risk on the part of local pastors. We’re not there yet, and we can certainly pray and hope that our system has been properly instituted in order to protect these religious liberties as it has so far; no lion pits or Colosseums have been built yet, so far as I know. That said, no system or nation is perfect so let’s not be so naive as to think that this won’t have real repercussions that Christians need to be prepared for.

For those of us wondering what to make of all of this, I would commend to you Russell Moore’s sober, yet hopeful reflections on the meaning of these changes for the Church. His conclusion merits quoting as it keeps our eyes firmly fixed on the main thing:

Same-sex marriage is headed for your community. This is no time for fear or outrage or politicizing. It’s a time for forgiven sinners, like us, to do what the people of Christ have always done. It’s time for us to point beyond our family values and our culture wars to the cross of Christ as we say: “Behold, the Lamb of God who takes away the sins of the world.

July 1, 2013
Yeezus People: How Kanye West is the Voice of the Millennial Generation
Next Post 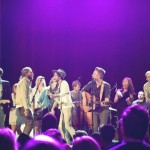 July 1, 2013 Our Favorite Songs of 2013 (So Far), Part One
Recent Comments
0 | Leave a Comment
Browse Our Archives
Related posts from Christ and Pop Culture