Wedding Photography, Sacrifice, and the ‘Price’ of Citizenship

“The Huguenins are free to think, to say, to believe, as they wish; they may pray to the God of their choice and follow those commandments in their personal lives wherever they lead. The Constitution protects the Huguenins in that respect and much more. But there is a price, one that we all have to pay somewhere in our civic life.

In the smaller, more focused world of the marketplace, of commerce, of public accommodation, the Huguenins have to channel their conduct, not their beliefs, so as to leave space for other Americans who believe something different. That compromise is part of the glue that holds us together as a nation, the tolerance that lubricates the varied moving parts of us as a people. That sense of respect we owe others, whether or not we believe as they do, illuminates this country, setting it apart from the discord that afflicts much of the rest of the world. In short, I would say to the Huguenins, with the utmost respect: it is the price of citizenship.”

Elaine Huguenin had a policy of photographing same-sex clients, but not same-sex ceremonies, as that would render her a celebrant and constitute an endorsement of the practice in violation of her conscience. The main decision rejected the distinction between action and identity in this case because marriage is so closely tied to sexual identity. According to the Justices, refusing to photograph a ceremony would go against the core point of the NMHRA. By refusing to photograph such ceremonies, in the court’s opinion, it “violated the NMHRA in the same way as if it had refused to photograph a wedding between people of different races.”

I won’t offer much comment on the legal coherence of majority decision. Others already have more ably than I could. Nor do I want to spend time talking about the nature of ‘equality‘, or whether ‘gay is the new black‘, or deal with the trope that this is the same thing as the Civil Rights battle.

But Justice Bosson’s concurring decision? Well, that’s something worth a few comments.

‘Tolerance’, Belief, and Monotheism– The first point worth briefly mentioning is the slippage in the notion of the word ‘tolerance.’ None of this is new, of course, but tolerance is no longer simply putting up with people or opinions with whom you disagree, or even respectfully putting up with them. It’s no longer even silencing any kind of criticism of it. Tolerance now means functional affirmation. For Elane photography to be tolerant, at this point, they have to essentially endorse through economic and artistic practice, a practice to which they are morally opposed. Their moral opposition simply isn’t tolerable anymore.

Even more to the point, this is classic example of a modernist’s approach to belief and conduct, or the untenable separation between the public and private spheres. Religious faith is a thing that is fine in your private life, but not the sort of thing that you attempt to practice out in the public square where it counts. Pray to God, obey whatever commandments you choose in your front-yard, but keep it where it belongs–safely out of our marketplace.  Don’t actually act on your beliefs, just, you know, safely think them to yourself. Realize, out in the real world of the market–well, that’s where we make the rules.

Now, you can probably see where this is going, but it’s worth asking explicitly “What if you believe your God has things to say about your life in the market-place?” Practically-speaking, the neat delineation between private belief and public practice doesn’t work with Western monotheisms like Christianity, Judaism, and Islam. They have those strong sort of ‘every inch of your life’ kind of ethics, such that if you tell them they’re fine to believe what they want as long as they act they way you want, in some particular area, you’ve effectively told them to deny their beliefs. If their God has commands relevant to that area of life, well, telling them to ‘compromise’ is asking them to disobey the eternal God because a few justices in New Mexico think it prudent. Bosson admits as much in the decision, but somehow finds it a reasonable demand to make. Just a hint, at least in Judaism and Christianity, they have texts that tell them what to do about situations like that (cf. Daniel, Acts 5:29).

Sacrifice, the Public Square, and the ‘Price’ of Citizenship – In ancient Rome, citizens were required to sacrifice to the gods and the Emperor as an act of citizenship. Sacrifice and piety kept the order of the state going, placating the gods, ensuring social stability and so forth. Now, interestingly enough, aside from state sacrifice, there was a decent amount of ‘religious’ freedom. You want to pray to some Egyptian import god? Fine. Join 5 or 6 more religious societies? Fine. Believe in your heart that you are loved by the gods? Fine. Just about any cult or religion was ‘licit’ as long as it wasn’t a threat to the social order and you sacrificed as a citizen.

This is what got Christians labeled dangerous ‘atheists’ by their pagan neighbors. They wouldn’t participate in state sacrificial-rituals that were involved with idolatry and emperor-worship. For this they were persecuted and deemed threats to the social order. They protested that they prayed for the emperor and the state to God, but simply would not offer incense to him as god. They were good citizens, but the ‘price’ of citizenship being asked in a sacralized state was too high for them. Their citizenship in the Roman empire was entirely subordinated to their citizenship in the kingdom of Heaven. To offer ultimate allegiance or worship to anyone but King Jesus was, by definition, to dethrone him. That, they would not do. Again, “we must obey God not men” (Acts 5:29).

These considerations begin to prepare us to understand the ‘price’ Bosson believes the Huguenins must pay for citizenship: they are being asked to make the proper sacrifices to the state. The sacral order of the liberal state must be maintained, even at the cost of its citizens’ deepest convictions about life. That’s what makes Bosson’s opinion so remarkable–nobody’s been quite as blunt about it yet.

Instead, we talk about having some sort of neutral public square into which people are trying to bring their narrow, exclusive, religious beliefs. The court’s decision reveals the fact that this is not some neutral zone, but a square dominated by a different object of ultimate, conduct-determining loyalty, concern, and passion (ie. religion) that is equally as narrow, and will not brook competition. (Although, for a complicating and important discussion of what counts as ‘religious’ and ‘secular’, see William T. Cavanaugh.)

Martyrdom
Around the world right now, Christians are suffering real, substantial violence that makes harsh words, public disapproval, and even a lawsuit or two, seem like light and momentary suffering by comparison. That said, without undue melodrama or alarmism, it’s important to consider the Christian call to martyrdom in this context.

Writing after the recent SCOTUS decision in Windsor, Peter Leithart reminds us that fundamentally, martyrdom is costly witness:

In Greek, martyria means “witness,” specifically witness in a court. At the very least, the decision challenges American Christians to continue to teach Christian sexual ethics without compromise or apology. But Windsor presents a call to martyrdom in a more specific sense. There will be a cost for speaking the truth, a cost in reputation, opportunity, and funds if not in freedoms.

If the call was a bit fuzzy after Windsor, the New Mexico Supreme Court’s decision sharpens it. Christians will be increasingly called to bear witness, testimony, to the truth of the Gospel and God’s will for the creative order of the world in ways that will be uncomfortable and costly.

Leithart thinks that by and large an American church that continues to confuse State with Kingdom has not been well-trained for our day on the witness-stand. I’m inclined to agree. For those who’ve bought into the hybrid religion of Americanism, the idea that our citizenship, patriotism, and morality will be called into question in the process is a horrifying reality . Whether as conscientious objectors to questionable military interventions, or protesting the culture of infanticide protected by law, Christians must be prepared to bear reproach as they live as witnesses to the Gospel in the whole of their lives–not simply those areas the State will allow God to have a say in.

Taking up your cross and joyfully following the Martyr-King who sacrificed himself to bear witness God’s rule–in a sense, that’s the ‘price’ of citizenship in the Kingdom of God.

August 29, 2013
Elsewhere: Abortion as a Failure of Feminism?
Next Post 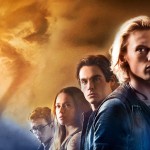 August 30, 2013 Not A Fan of Fan Fiction? Some Things To Consider
Recent Comments
0 | Leave a Comment
Browse Our Archives
Related posts from Christ and Pop Culture