Before “Doctor Who” officially turns 50 this November, Christ and Pop Culture will spend 12 weeks delving deep into the science-fiction series phenomenon.

When I was a child, I thought like a child and enjoyed Christian programs for children. Those included the Christian Broadcasting Network’s anime TV series Superbook, in which children travel in a whirling “time vortex,” and Adventures in Odyssey, whose stories often included a time machine-like device shaped (at first) like a phone box.

Now that I’ve grown, I don’t put away these childish things. Also, I enjoyed finding what may have been their inspiration.

Spinning time vortexes (not leading to Bible stories) and a time-traveling phone box (with trips not only back in time but forward and sideways)—they’re all part of Doctor Who. That British science fiction television series turns 50 this year, and since the franchise restarted in 2005, it has gained millions more fans worldwide, including many Christian fans.

At my church alone, my wife and I have helped bring several into this fandom. Our newest fellow fan at first didn’t understand such esoteric references as “Fantastic!” “Allons-y!” “sonic screwdriver,” “Don’t blink,” “Hello sweetie,” “Ex-ter-min-ate,” “Bowties are cool,” and “There’s something that doesn’t make sense; let’s go and poke it with a stick.” Since beginning to watch the series, she has added more Doctor Who-related memes to her Facebook feed than I’ve seen from a single mortal.

You can find many online guides to Doctor Who, some written by professing “geeks” in mildly condescending tones. But this feature begins something new: Doctor Who’s Doctrine is an expansive 12-part serial from several writers that will explore the heroes, villains, story-world, favorites, and not-so-favorites of the BBC’s heroic time-traveling alien Time Lord.

Lord (not Time Lord) willing, we will end this Doctor Who’s Doctrines series on Friday, November 22. That’s just one day before Doctor Who turns a half-century old; the BBC launched the first episode on November 23, 1963.

We invite you to step in and be our companions for this journey at Christ and Pop Culture.

Elsewhere you’ll find articles about why the series is popular. But how can Christians enjoy it, not by following a we-must-redeem-it template, but naturally and joyfully for God’s glory?

One of my friends calls the Doctor the ultimate secular humanist savior. Others point to the constant “hero’s journey” themes that can’t help but reflect Scripture, complete with genuine good vs. evil (yet with flawed good), sincere romance, and sacrificial love and death. Later in the series, we’ll explore the show’s mixture of Christian and humanist motifs and consider which of these overarching themes powers the stories.

We’ll also cover the franchise’s love stories, including unorthodox relationships. And we’ll look at other reasons this diverse fanbase has come together, including the show’s music, settings, sense of adventure and wonder, complex plots, quick dialogue, and memorable characters.

If you’re already a Who fan, this feature series may give you more to consider and discuss with other fans long before the program resumes with an anniversary special featuring two Doctors, and the Christmas special when outgoing lead Matt Smith will “regenerate”—change his appearance but not character—into the 12th Doctor, played by newcomer Peter Capaldi.

If you’re not a Who fan—and you have still read this far—all this talk may sound like how Christians debating end-times labels surely sounds to some atheists. If so, find one of those intro-to-Who articles. Or better yet, start watching the series.

I recommend the series 1 opener, “Rose,” but wait until the mid-series two-parter “The Empty Child” and “The Doctor Dances” to see how great the stories can be. That’s how I began with Doctor Who and how I was able to introduce it to a long-time Internet acquaintance who later became my wife. Really, I can’t think of a better way to get to know a girl, or even discern how much you have any common with any person, than to view together a television story featuring a lanky North British-sounding chap in a black leather jacket, accompanied by a blonde, riding a time-ship and tracking a UFO through a time vortex.

In that adventure, the Doctor and his human friend Rose chase the UFO to Britain, where the object presumably falls, and the Doctor heads to a pub. The patrons’ 1940s attire should have given the era away. But the Doctor, frequently a big-picture thinker, often misses such details.

“Hello!” he announces. “Has anything fallen from the sky recently?” He gets dead silence. Then everyone breaks out laughing.

“Sorry, have I said something funny?” the Doctor inquires seriously. “[It] would have landed quite near here,” he continues, as people begin scrambling to the sound of World War II air-raid sirens. “With a very loud… bang…”

That’s one of the little scenes that sold me on the series. I haven’t even described the dashing “time agent” with questionable ethics (and sexual leanings), the rapid-moving story with surprises and humor to spare, and the bizarre zombie-like boy in a gas mask.

Zeal for your Whos has consumed me

Doctor Who fans tend to be like me: very “evangelical” about their favorite stories. That can become a false zeal substituting for Gospel zeal or it can remind us of that mission call. After all, if I can proclaim the “glories” of a fantastic story-world without caring how weird it may seem, then I need not feel guilty for that zeal. Rather, I can see it as a reminder of the greater zeal to proclaim Christ as Hero, and a desire even greater than that: to love the story of Christ and the person of Christ.

Yes, Christians can overdo the idea of pop culture discernment. We may also overdo sermons. But Christians should hear sermons, and we should journey deeper into pop culture phenomena like Doctor Who. It’s never “just a story.” Deeper journeys help us enjoy the stories even more. 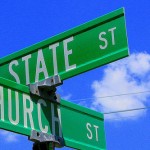 September 11, 2013 Should Churches Be Taxed?
Recent Comments
0 | Leave a Comment
Browse Our Archives
get the latest from
Evangelical
Sign up for our newsletter
POPULAR AT PATHEOS Evangelical
1

An Online Event You Will Not Want To...
The recent closure of face to face events around the world is...
view all Evangelical blogs
What Are Your Thoughts?leave a comment
Copyright 2008-2020, Patheos. All rights reserved.