The Voyager-1 spacecraft recently made history by becoming the first man-made object to officially leave the solar system. Originally launched in 1977 with the intention of studying the outer planets, Voyager has lasted far longer than NASA engineers ever expected. It kept going, feeding data to scientists all the while, and has finally broken through into interstellar space. Throughout its journey, Voyager has given us an unprecedented view of the solar system and the universe beyond. This view, at times, has inspired deep existential questions about our place in the cosmos and has reminded us of our humanity.

In 1990, after Voyager had passed Neptune, famed astronomer and science writer Carl Sagan worked with NASA to get the spacecraft to turn around and take a photo of the solar system looking back toward Earth. The image—which became known as the “Pale Blue Dot” portrait—captured everyone’s imagination and caused Sagan to wax eloquent upon reflection. In a celebrated passage of his book by the same name, Sagan writes:

“Consider again that dot. That’s here. That’s home. That’s us. On it everyone you love, everyone you know, everyone you ever heard of, every human being who ever was, lived out their lives…. – on a mote of dust suspended in a sunbeam.

“The Earth is a very small stage in a vast cosmic arena. Think of the rivers of blood spilled by all those generals and emperors so that in glory and triumph they could become the momentary masters of a fraction of a dot. Think of the endless cruelties visited by the inhabitants of one corner of this pixel on the scarcely distinguishable inhabitants of some other corner. How frequent their misunderstandings, how eager they are to kill one another, how fervent their hatreds. Our posturings, our imagined self-importance, the delusion that we have some privileged position in the universe, are challenged by this point of pale light. Our planet is a lonely speck in the great enveloping cosmic dark. In our obscurity—in all this vastness—there is no hint that help will come from elsewhere to save us from ourselves…

“[T]here is perhaps no better demonstration of the folly of human conceits than this distant image of our tiny world. To me, it underscores our responsibility to deal more kindly with one another and to preserve and cherish the pale blue dot, the only home we’ve ever known.”

This beautiful reflection from Sagan on the Voyager photo, along with Voyager’s most recent accomplishment, helps remind us of our humanity in at least four ways:

1. We are insignificant. Thoughtful humans have long since acknowledged our smallness compared to the rest of the world. Even before we began attempting to actually calculate celestial distances, we knew the universe to be immeasurably vast, and us to be incomprehensibly tiny by comparison. For example, when the biblical psalmist looked up at the night sky, it greatly humbled him, “When I look at your heavens, the work of your fingers, the moon and the stars, which you have set in place,what is man that you are mindful of him, and the son of man that you care for him?” (Ps. 8:3–4).

There is a popular notion today that religion caused humans to think we are the center of the universe (both spatially and existentially), until science proved we are neither. That notion is both historically and philosophically mistaken. We thought we were at the spatial center of the universe because Aristotle’s physics required it and because that’s how it appears visually from our perspective. And while religion has certainly promoted the idea that humans are very special (which we are), it has equally taught us that we are insignificant in comparison to God and the universe. Voyager-1 and the photo it took of Earth reminded us of that very important truth.

2. We are fallen. When we do forget our smallness, when we become prideful (which is sadly quite often), we hurt ourselves and our environment. As Sagan pointed out, history testifies to the depths of human error. One cannot look at an image like the Pale Blue Dot portrait and not feel a sense of moral failure—a sense that we have missed the mark. By seeing how small we really are, we see how big our egos have become and what a tragedy it is that we’ve allowed them to become so. Voyager-1 held up a mirror in 1990, from 3.7 billion miles away, and showed us our ugliness. It reminded us of what the Bible had long since taught us, that we have fallen short of the glory of God.

3. We are fearfully and wonderfully made. As insignificant and fallen as we are, there is something very special about human beings. The fact that we can create a machine to fly to the outer reaches of our solar system and take a selfie of planet Earth shows we are different from other animals. It is remarkable and astonishing that our abstract thoughts—geometry, math, reason, logic, and so on—can tell us true things about reality, allow us to correctly predict the conditions of places we have never been and the existence of things we’ve never seen. If it were not for human creativity and genius, Voyager-1 would not exist. Thus, the Voyager spacecraft is itself evidence that we are God’s image bearers.

4. We live in a meaningful world. It is not enough that humans have creative and abstract thought. If physical reality were not amenable to our thoughts, we could never have accomplished what we have so far. As Albert Einstein famously said, “The most incomprehensible thing about the universe is that it is comprehensible.” The universe is mysteriously ordered in a rational way. Hence, we can make sense of it to a surprising degree. In other words, the world is full of meaning that we discover, not make up.

Sagan tended to interpret the vastness and apparent emptiness of the universe to mean that the universe is ultimately meaningless; and the smallness of humans made him feel a kind of existential futility. But I think he was mistaken. Physical size has nothing to do with meaning or value. The very fact that we can study the world and make sense of it shows the world is not meaningless. Unfathomably vast and mostly (apparently) “empty,” perhaps, but meaningless? No. Every square millimeter of the lonely blackness of space is filled to the brim with meaning—we discover patterns in all of it, from the way galaxies hold together, to the way atoms hold together. That’s why we can send a spacecraft outside of our solar system, because the universe is so meaningful.

The universe isn’t meaningful only to science, however, it bespeaks personal, existential meaning as well. Yes, our insignificance shows us that we are not as important as we’d like to think. But it also shows us that we are far luckier than we ever imagined. So lucky, in fact, that “luck” probably had nothing to do with it. The infinitesimally slim chances of our existence point to an objective purpose behind the universe, not meaninglessness. And the awareness of our own fallen nature that we feel when we look at Voyager’s photo shows us that we have a kind of dignity that only haunts creatures who have a purpose, but have lost their way.  The pain we feel when we violate Love—that is, when we violate our purpose—weighs on us in a more concrete and tangible way than any existential dread ever could.

Albert Camus said that existence is absurd because we want our life to have objective meaning, but it doesn’t. While I agree with him that part of being human involves a longing for objective meaning, I disagree with him (and Sagan) that there is none. I think the rational order we discover in the universe—the very thing that makes missions like Voyager’s possible—is a clue to our purpose. The universe seems prearranged in such a way as to invite us, to beckon us, to search things out and discover the hidden depths of its beauty. And through this fortuitous process we are often given opportunities, such as the one in 1990, to (re)discover our own humanness as well as the power and wonder of our Creator. Thanks, Voyager, for reminding us. 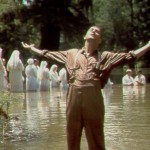 September 24, 2013
God and Country: Echoes of the Church in American Music
Next Post

September 24, 2013 ELSEWHERE: New Study Suggests 'Porn Addiction' Is a Smutty Fiction
Recent Comments
0 | Leave a Comment
"Radford made a connection between Ender and Hitler.Another possible connection: Could Card have been referring ..."
Raymond Z ‘Ender’s Game,’ Genocide, and Moral Culpability
"Faith is the confidence that what we hope for will actually happen; it gives us ..."
Smiley E.E. Music Matters: David Bowie, Still Not ..."
""that many of us do not accept that a few cells of human DNA constitute ..."
myintx How I Changed My Mind About ..."
"No thought given to the unborn child whose life was 'silenced and oppressed'... sad."
myintx How I Changed My Mind About ..."
Browse Our Archives
get the latest from
Evangelical
Sign up for our newsletter
POPULAR AT PATHEOS Evangelical
1