How The Psalms Made Folk Music

How The Psalms Made Folk Music September 17, 2013 Nick Rynerson

Traditional country and blues music is a far cry from most contemporary country and blues music. Some music purists (or snobs, if you will) find FM radio country and blues unlistenable replicas that bear more resemblance to the Eagles than to their early folk heroes. And to an extent, they are right. American folk music from the early twentieth century captured a powerful, bizarre, beautiful landscape on their newfangled recording devices. The question is: Can this really be replicated today?

But first, what is it that makes American folk music so special?

I used the phrase “country and blues” to represent the modern descendants of the elusive, diverse, mysterious landscape that was American folk music at the turn of the century. This music is inexhaustibly diverse in sound, race, geography, and purpose. The soundscape of early twentieth century folk music encompassed the blues, Appalachian music, Negro spirituals, Baptist choirs, Texas guitar music and a host of other sounds. And while all of these sounds were all evolving and coming into their own before the early twentieth century, the advent of sound recording and mass distribution made the weird itinerant songwriters of early folk music the founding fathers of popular music. Folks like Dock Boggs, Robert Johnson, Blind Lemon Jefferson, and Charlie Poole became the voices of a rapidly changing culture. Americans related to the strange sounds of rural itinerant musicians of every size and shape. And from this came popular culture: Hank Williams, Bob Dylan, BB King, and most every other musician, record exec, and promoter that would turn mass-produced American music into a big, big business.

The blues changed American music and became the bedrock for most popular music. Coming from the hard lives of southern African-Americans, blues music has always had an indescribably powerful quality about it.

Today, some think that the blues and country—the firstborn children of American folk music—have lost their way. Many don’t find the emotional sincerity of folk music when Blake Shelton encourages us to “chew tobacco, chew tobacco, chew tobacco, spit.” And when middle-aged white men perform so much contemporary blues music—a genre born from desperate poverty in black communities—it doesn’t seem like the same “authenticity” can be conveyed. Popular culture seems to be selling a phony version of a once-stunning medium—like a hustler selling fake Rolexes.

But despite all of that, can American folk music be reproduced authentically? Can authenticity exist amidst the advertisements? In short: yes. It is always (or even often) authentic? No, probably not. But our contemporaries are still capable of channeling the same authentic sound of their aural forefathers. To understand how, the Psalms are a helpful artifact.

Along with being God’s perfect word, the hymnbook of the Bible is an unparalleled artistic achievement that has not only transformed the Church but the entirety of Western music and culture. Like American folk musicians, David and the other Psalmists were at the right place at the right time and responded musically to the temperature of their hearts.

In his posthumous book Letters To Malcolm, C. S. Lewis insists that the act of doing (or, as he says, the noun) is less important than heart behind it (the adjective):

For I think we respect nouns (and what we think they stand for) too much. All my deepest, and certainly my earliest experiences seem to be of sheer quality. The terrible and the lovely are older and solider than terrible and lovely things. If a musical phrase could be translated into words at all it would become an adjective. A great lyric is very like a long, utterly adequate adjective.

The adjectives of the Psalms have been truly and beautifully reproduced over the centuries resulting in sublime musical brilliance such as Handel’s Messiah, the hymns of Isaac Watts, and recently the music of the Gettys. Not to say that this music is equal to David’s psalms, but rather that it rings of the same adjectives, while stale, mechanical music based on Psalmic nouns falls flat. In fact, the Psalms encourage us to join in with the Psalmist:

Praise, O servants of the LORD,

“Sing praises to the LORD, O

The Pslamist encourages us to reproduce the worship (what Lewis might call the adjectives) of the Psalmist.

So it goes with folk music and its offspring—inviting us into the stories and leaving its mark. Like the Psalms of lament, much early country and blues has a broken spirit. This adjective (maybe it would be despondent or deflated) was repackaged in the high and lonesome sound of Hank Williams and the grit of Ben Nichols.

The replication of the emotional, spiritual heart of the Psalms has given us music with incredible power. Even recently.

The same goes for country and blues music.

When the style of the blues (or the Psalms) is repurposed without the soul of the style, it dies. When someone sings the blues who understands the heart of the blues—the adjective—it lives.

There is no formula for replicating folk music, but anybody can explore its riches and mine some of its gold. As it is with the Psalms, there is plenty to go around. Music is a fascinating mine of human emotion and spiritual power. As novelist Robert Cantwell writes of his favorite American folk song (see the first video above):

Listen to ‘I Wish I Was a Mole in the Ground’ again and again. Learn to play the banjo and sing it yourself over and over again, study every printed version, give up your career and maybe your family, and you will not fathom it.

The magnitude of Jesus is an even deeper cavern than Bascom Lamar Lunsford’s opus, and the Psalms grant us admission into those deep adjectives of the gospel. And even more incredibly, ask us to recreate them. Great, authentic music is always evangelical—exhorting us to enter into what is being created. 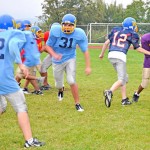 September 17, 2013
Why I Won't Encourage My Kids to Play Football
Next Post

September 17, 2013 ELSEWHERE: Damon Lindelof is Bringing the Rapture to HBO
Recent Comments
0 | Leave a Comment
"Radford made a connection between Ender and Hitler.Another possible connection: Could Card have been referring ..."
Raymond Z ‘Ender’s Game,’ Genocide, and Moral Culpability
"Faith is the confidence that what we hope for will actually happen; it gives us ..."
Smiley M.M. Music Matters: David Bowie, Still Not ..."
""that many of us do not accept that a few cells of human DNA constitute ..."
myintx How I Changed My Mind About ..."
"No thought given to the unborn child whose life was 'silenced and oppressed'... sad."
myintx How I Changed My Mind About ..."
Browse Our Archives
get the latest from
Evangelical
Sign up for our newsletter
POPULAR AT PATHEOS Evangelical
1