Saving the Redshirts in ‘Star Trek into Darkness’

Warning: This article contains spoilers about key details of the plot of Star Trek into Darkness.

September 10, 2013 marks the DVD/Blu-ray release of Star Trek into Darkness, the second installment in J. J. Abrams’s reboot of the Star Trek franchise. When the movie appeared in May, Christ and Pop Culture‘s Derek Rishmawy observed some of the movie’s troubling misogynistic overtones, particularly in its use of Alice Eve as the character of Dr. Carol Marcus. That said, however, Star Trek into Darkness—which was quite well-received by critics on the whole—also touches on some more thoughtful themes, particularly in the way it takes pains to acknowledge the significance of individual lives.

The first Star Trek reboot in 2009 was entertaining but racked up some pretty notable destruction. One starship is blown up in the opening fifteen minutes, and before the film is done, the entirely planet Vulcan has been annihilated. The movie allows for some emotional resonance: Kirk’s father dies in the opening sequence, and viewers experience some of the trauma of Vulcan’s destruction alongside Spock. Still, as I have recently touched on, big-budget movies must earn their high stakes, and it is not always certain that the first Star Trek does so.

The destruction of an entire world is a pretty serious matter and probably requires more audience connection than the jaunty Star Trek could provide in its two hours. Moreover, it is obliterated by the villainous Nero as retaliation for the destruction of his homeworld, Romulus, which receives far too little attention. What is true of the Star Trek reboot on the planetary level is also true on the individual level. At the end, as a singularity threatens to devour Nero’s vessel, Kirk and Spock make a perfunctory offer to rescue him, but it comes across as little more than a nod to form. Earlier, the amped-up Chief Engineer Olson is quickly and casually incinerated by Nero’s destructive platform. I am not suggesting that the movie is wholly callous, but it does not always take the care that it might in ensuring audience empathy for its victims.

Star Trek into Darkness, however, comes closer than its predecessor to demonstrating a respect for the dignity of each individual life. The significance of life in the face of death flows naturally from the movie’s source material: though chock-full of “Easter eggs,” the second movie in Abrams’s reboot most obviously bears the imprint of the second Trek movie, Star Trek II: The Wrath of Khan. And one of the most crucial themes of that movie is the dignity of human life, even in the face of suffering and death.

At the end of The Wrath of Khan, after Spock has sacrificed himself to ensure the Enterprise crew’s survival, Kirk’s son David tells him, “You never have faced death,” to which Kirk responds, “No, not like this. I haven’t faced death. I cheated death, tricked my way out of death, and patted myself on the back for my ingenuity. I know nothing.” Throughout the movie, Kirk is forced to grapple with the ways in which his past actions—his affair with Carol Marcus, his stranding of Khan, his clever ability to escape peril alive—now have very real consequences that affect those he love. Almost none of the episodes of The Original Series ever explore such consequences.

This thematic emphasis can be seen, among other ways, in Star Trek into Darkness‘ clever play on a longstanding Trek in-joke: the red shirt. In The Original Series, more officers in red uniforms die than in blue or gold, often victims of away missions gone awry. They cause Kirk and his crew brief pangs but no long-term remorse. So frequent was this motif that John Scalzi has recently written a Hugo Award-winning novel on the subject. Star Trek into Darkness plays on this association but cleverly subverts it. Pavel Chekov, a major character, is placed for a time in a red shirt, but is able to escape peril. On an away mission, two seemingly generic security officers accompany the main cast. They are told by Kirk to “lose the red shirts,” and rather than being killed, as might well have happened in The Original Series, both men survive.

Perhaps even more surprising is the movie’s treatment of its primary villain. Khan was always an intriguing character as embodied by Ricardo Montalbán, and he is no less so when portrayed by Benedict Cumberbatch. And like the first Khan, Cumberbatch’s character, however perverted his ethical vision may be, is motivated by his concern for those he cares most about: the other genetically engineered members of his “family.” And, unlike any other Star Trek movie villain, Khan survives at the end; indeed, Kirk violates orders specifically for the purpose of attempting to bring him back alive. If sparing Khan’s life allows the producers of the new Trek franchise the option of retaining Cumberbatch’s services for future films, it also creates a new precedent: the possibility of a satisfying movie arc that does not require the death of the primary villain to establish a degree of closure.

Of course, Star Trek into Darkness is an action movie, and as such, people do die in it. But I think the movie takes greater care than many other similar movies in ensuring that the deaths are not regarded flippantly. The movie takes several minutes to set up a back story for Thomas Harewood, father to a dying child, so that when he kills himself to take out a Section 31 installation at Khan’s behest, the death is not without a tinge of real pathos. When Khan attacks and kills the Starfleet officers who have assembled to respond to that incident, we experience their deaths through the lens of Admiral Pike, a character we have grown to love. Kirk attempts to negotiate with the Klingons before the situation breaks down, while Scotty tries to talk one of the Vengeance’s personnel out of staying in a cargo bay that will soon become dangerous. Even the (implicitly gruesome) death of the reprehensible Admiral Marcus causes the viewer some pangs, coming as it does in full sight of his horrified daughter.

It is Marcus’s cavalier, pragmatic approach to human life that Star Trek into Darkness critiques. When Kirk and his crew violate orders in the movie, it is consistently for the purpose of sparing lives. The Enterprise’s early rogue mission to spare a primitive people from a volcano is roundly criticized by Kirk’s superiors, yet its purpose was for the sake of rescuing the species. Scotty, and later Kirk, find themselves at odds with Marcus as his orders grow increasingly harsh, to the extent that Kirk must risk his own crew to uphold his ethics. The ultimate test of these ethics comes when—in the infamous reversal of Star Trek II—Kirk must sacrifice his life for his “family.”

In a recent posting, I sided with io9’s Charlie Jane Anders (and with Star Trek into Darkness co-writer Damon Lindelof) in indicting Hollywood blockbuster movie for not doing enough to “earn” their high stakes. And it might be possible to find Star Trek into Darkness guilty on this count in the climactic action sequence when Khan plows the Vengeance into portions of downtown San Francisco. Of course, San Francisco is targeted because it’s the home of Starfleet, and thus the most familiar city in the Star Trek franchise, which gives the audience some connection to it. The Enterprise crew tries to stop Khan from carrying out his plan. Civilians are not entirely ignored, but are shown struggling to escape the destruction. Still, the 9/11-like memorial at the end acknowledges that some have died.

Does Star Trek into Darkness “earn” its final pathos? I don’t know that I can say definitively that it does, but to its credit, the movie works harder than many of its ilk to try. It’s attempting a difficult paradox to pull off, to be a summer sci-fi blockbuster that critiques senseless killing or Machiavellian ethics. Whether or not it succeeds completely, these are at least worthwhile goals to attempt, and some credit is due to the movie and its producers for trying.

September 13, 2013
ELSEWHERE: How to Quantify Your Self
Next Post 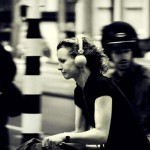 September 16, 2013 Three Things to Think About Before Using Headphones in Public
Recent Comments
0 | Leave a Comment
Browse Our Archives
get the latest from
Evangelical
Sign up for our newsletter
POPULAR AT PATHEOS Evangelical
1