Why Are We Still Surprised When “Entertainment” Does More Than Entertain Us?

Why Are We Still Surprised When “Entertainment” Does More Than Entertain Us? November 26, 2013 Jason Morehead

Bruce Springsteen is an icon of rock n’ roll, a modern day troubadour who has spent the last four decades singing about the lives and struggles of the working class, the down and out, and the dispossessed. And now, thanks to Rutgers professor Azzan Yadin-Israel, he’s the subject of a college course. More specifically, a college course titled “Bruce Springsteen’s Theology” that, as the title implies, examines the spiritual and theological undercurrents in The Boss’ music.

In a recent interview, Yadin-Israel (who normally teaches Jewish studies and classics) explains his reasoning behind the class:

I… hope the students gain an appreciation for a particular way of thinking about texts, an attentive engagement of an author’s work, and an understanding of the broader contexts — political, literary, theological, etc. — that inform a work.

Not surprisingly, news of Yadin-Israel’s class has spread quickly and widely. I first became aware of it via this awkwardly titled Time piece: “There’s a Bruce Springsteen Religion Class for College Kids Who Worship ‘The Boss’,” which opens with this:

College students devoted to Bruce Springsteen, rock star and New Jersey native, can now take a theology class on “The Boss” at Rutgers University — a legitimate way to listen to music all day and still graduate on time.

There seems to be a certain dismissiveness in the Time piece, as if the writer can’t quite believe that such an obviously blow-off class exists. The Huffington Post also wrote about Yadin-Israel’s class, and several commenters seemed shocked by the class’s existence, calling it “ridiculous” and expressing dismay that college students have yet one more stumbling block to becoming productive members of society. All of which is somewhat understandable. Today’s college landscape is full of classes that seem, well, trivial at best (e.g., “Maple Syrup: The Real Thing,” “Brothel Management,” “History of Surfing).

But what is incredulous to me is this continuing idea that popular culture — be it rock n’ roll, television, video games, etc. — ought to still be considered as something not worth serious consideration and thought. That we’re still shocked that our entertainers might dare to explore more substantial and sublime themes in their material. But if you’ve spent any time on Christ and Pop Culture, then hopefully you’ve seen that what we so often dismiss as “entertainment” nevertheless speaks powerfully into our lives. That seemingly disposable culture can contain themes and material touching on our deepest longings and concerns.

In the aforelinked interview, Yadin-Israel claims that Springsteen’s music is dominated by themes of “redemption… and the sanctity of the everyday.” These are themes certainly worth thinking about, and if a Bruce Springsteen song is what brings them to mind, then so be it. And if a seemingly frivolous class gets a college freshman, who might otherwise never consider such notions, to think about them under the guise of listening to rock n’ roll for college credit, then I say more power to them… and rock on. 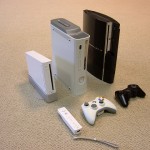 November 25, 2013
The Human Generation: How the Last Generation of Videogame Consoles Changed Gaming Forever
Next Post 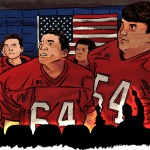 November 27, 2013 Moving Images: Interpreting Film In Spirit and Truth
Recent Comments
0 | Leave a Comment
Browse Our Archives
get the latest from
Evangelical
Sign up for our newsletter
POPULAR AT PATHEOS Evangelical
1

Answering a Question about the Trinity:...
Roger E. Olson
Related posts from Christ and Pop Culture