Why You Should Lay Off the “Santa Claus is Real” Stuff (Because He’s Not) December 20, 2013 Jeff Cavanaugh

Santa Claus is such a troublemaker these days. He’s been stirring up all kinds of debate among evangelicals these days over whether it’s right for Christians to allow and encourage their kids to believe in Santa Claus. On the one hand, you have folks like John Piper, who thinks Santa Claus is unnecessary and a poor imitation of the real Gift-Giver, Jesus, and Matt Walsh, who thinks Santa is a lie. On the other hand, there’s my CAPC colleague S.L. Whitesell, who thinks we should believe in Santa anyway, even if he isn’t real, and cites folks like Walsh as evidence that evangelicals lack God-glorifying imagination.

Both sides are wrong — and a little bit right. Piper and Walsh are right, of course, that Jesus is greater than Santa and that parents should take care that their kids aren’t so enamored with Santa and the stuff he brings that they miss the importance of Jesus, the greatest Gift. My parents chose to exclude Santa from our Christmas celebrations in favor of emphasizing Jesus, and it helped keep our enjoyment of Christmas in the right place.

But we don’t need to despise Santa like Piper and Walsh do. As Whitesell points out, C.S. Lewis told of a Santa who knew his place in the Christmas story and was perfectly able to bring joy and delight to children while giving glory to the true King. There’s no reason parents can’t tell the myth of Santa that way, too. Precisely because Jesus is greater than Santa, he has nothing to fear from Santa usurping his birth or his kingdom.

Whitesell is right to point out the ways that evangelicals need to grow in our capacity for imagination. Great stories have their own kind of truth that can’t be judged as true or false, but is no less “real” or worthy of our appreciation and delight. Stories like Santa can bring joy into our lives and help us better understand the great Story of what God has done for us in Jesus.

But in response to Whitesell, I’d point out that the Santa myth is awkwardly forced into intersecting with the “real” world in ways that other great myths aren’t. When I was little, nobody ever had to tell me that Middle-earth, Sesame Street, the Hundred Acre Wood, Narnia, and Neverland weren’t real. I knew they weren’t, but that didn’t stunt my enjoyment of them or crush my imagination in the least. Nobody had to tell me they weren’t real because nobody ever told me they were, that Peter Pan was actually going to fly in my bedroom window or that Aslan was going to teleport me to Narnia through my closet.

When we set out milk and cookies on Christmas Eve, and eat them up while the kids are in bed, when we make fake reindeer tracks in the lawn, when we engage in ridiculous speculation about how Santa fits down the chimney or how fast he has to fly to visit a billion households in 24 hours — when we do this stuff, we’re trying to pull Santa down from fantasy-land and make him “real,” for fear that kids won’t believe in him if they don’t see evidence. That’s help that Santa doesn’t need. Neither do our kids, whose imaginations are perfectly capable of enjoying Santa for the fun, magical story he is. When we go to elaborate lengths to prove to them that Santa is actually coming down the brick-and-mortar chimney in the living room, we’re failing their imaginations just as much as the Matt Walshes of the world who insist that Santa is a lie because he isn’t real.

Let’s not get up in arms about how others who do or don’t include Santa in their Christmas celebrations are ruining the holiday. Instead, let’s focus on glorifying the Lord of Christmas, whether we enlist the aid of Father Christmas or not. 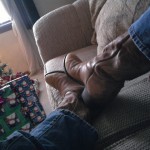 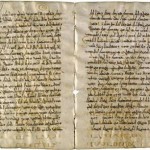 December 20, 2013 The Ancients are Coming: Medieval Texts at Your Fingertips
Recent Comments
0 | Leave a Comment
"Radford made a connection between Ender and Hitler.Another possible connection: Could Card have been referring ..."
Raymond Z ‘Ender’s Game,’ Genocide, and Moral Culpability
"Faith is the confidence that what we hope for will actually happen; it gives us ..."
Smiley M.M. Music Matters: David Bowie, Still Not ..."
""that many of us do not accept that a few cells of human DNA constitute ..."
myintx How I Changed My Mind About ..."
"No thought given to the unborn child whose life was 'silenced and oppressed'... sad."
myintx How I Changed My Mind About ..."
Browse Our Archives
get the latest from
Evangelical
Sign up for our newsletter
POPULAR AT PATHEOS Evangelical
1

Are You a 'Judgmental' Christian? Good.
The Chorus In The Chaos
Related posts from Christ and Pop Culture