Parable of the door(s)

One imposing human fact chases us and tags us with garish, looping graffiti. We can read it in everything we seek or strive after: preoccupations with trends, our serial relationships, the grasp for power that no one quite avoids, how we fill our free hours with diversions, or the embarrassing daydreams in which we win unearned honors, exposure, fame. Robert Pinsky’s The Want-Bone sets this quality to verse: My food my parent my child I want you my own/ my flower my fin my life my lightness my O.

To be human means to find ourselves at the intersection of multiple corridors. The sheer number of hallways, which extend further than our eyes can see, give the sense of limitless possibility, a delicious freedom. Some corridors bear names, such as Harold, Priscilla, or Felicity, one for each person we fall in love with. Other hallways represent different talents: perhaps embroidering vegetal life onto tea towels, or banging out complex rhythms on the bottoms of bleach buckets, or advanced forensic entomology. Each corridor extends, like the spokes of a wheel, and as we spin to contemplate the hall of ham radio, or forming Chinese noodles by hand, or breeding angelfish, we can grow dizzy with choices. Other halls carry signs that say things like, “Hard Liquor,” “Collecting Old Newspapers,” “More Expensive Minks,” or “Caloric Intake.” In any given life, we can travel down one hall, then another, then a third, but then return to one we’ve already visited or choose a fourth; but we cannot explore them all; and the more of one that we investigate, the less of each of the others we can visit. Still, all these corridors end in a locked door.

Franz Kafka’s “Before the Law”

Before the Law stands a doorkeeper.

To this doorkeeper there comes a man from the country and prays for admittance to the Law. But the doorkeeper says that he cannot grant admittance at the moment. The man thinks it over and then asks if he will be allowed in later. “It is possible,” says the doorkeeper, “but not at the moment.” Since the gate stands open, as usual, and the doorkeeper steps to one side, the man stoops to peer through the gateway into the interior. Observing that, the doorkeeper laughs and says: “If you are so drawn to it, just try to go in despite my veto. But take note: I am powerful. And I am only the least of the doorkeepers. From hall to hall there is one doorkeeper after another, each more powerful than the last. The third doorkeeper is already so terrible that even I cannot bear to look at him.”
These are difficulties the man from the country has not expected; the Law, he thinks, should surely be accessible at all times to everyone, but as he now takes a closer look at the doorkeeper in his fur coat, with his big sharp nose and long, thin, black Tartar beard, he decides that it is better to wait until he gets permission to enter.
The doorkeeper gives him a stool and lets him sit down at one side of the door. There he sits for days and years. He makes many attempts to be admitted, and wearies the doorkeeper by his importunity. The doorkeeper frequently has little interviews with him, asking him questions about his home and many other things, but the questions are put indifferently, as great lords put them, and always finish with a statement that he cannot be let in yet. The man who has furnished himself with many things for his journey, sacrifices all he has, however valuable, to bribe the doorkeeper. The doorkeeper accepts everything, but always with the remark: “I am only taking it to keep you from thinking you have omitted anything.”
During these many years the man fixes his attention almost continuously on the doorkeeper. He forgets the other doorkeepers, and this first one seems to him the sole obstacle preventing access to the Law. He curses his bad luck, in his early years boldly and loudly; later, as he grows old, he only grumbles to himself. He becomes childish, and since in his yearlong contemplation of the doorkeeper he has come to know even the fleas in his fur collar, he begs the fleas as well to help him and to change the doorkeeper’s mind. At length his eyesight begins to fail, and he does not know whether the world is really darker or whether his eyes are only deceiving him. Yet in his darkness he is now aware of a radiance that streams inexhaustibly from the gateway of the Law.
Now he has not very long to live. Before he dies, all his experience in these long years gather themselves in his head to one point, a question he has not yet asked the doorkeeper. He waves him nearer, since he can no longer raise his stiffening body. The doorkeeper has to bend low toward him, for the difference in height between them has altered much to the man’s disadvantage. “What do you want to know now?” asks the doorkeeper; “you are insatiable.”
“Everyone strives to reach the Law,” says the man, “so how does it happen that for all these years no one but myself has ever begged for admittance?” The doorkeeper recognizes the man has reached his end, and, to let his failing senses catch the words, he roars in his ear: “No one else could ever be admitted here, since this gate was made only for you. I am now going to shut it.”

In Kafka’s parable, the Law represents justice, certainly; however, the Law also refers to the code written into reality, the “key” that provides meaning and allows regeneration. This Law functions in a way analogous to DNA, providing a kind of “alphabet” that spells out the hidden structure of life. The word “insatiable” describes the man’s heart, which cannot abandon its craving to enter. Despite the doorkeeper’s repeated refusals, the man is structurally incapable of turning away from this particular gate.

The puzzle that this parable presents us lies in the contrast between the man’s vigilant faithfulness to his desire, on the one hand, and his paralysis when it comes to entering through an open gate, on the other. This puzzle gives us the clue that the man craves something else even more than he needs admittance to the Law: he wants the doorkeeper to grant him permission. The parable describes a conflict, a tension, a drama – all of which implies relationship with a person. The parable’s force lies in the interplay between the two men (and not between the man and the gate). More than anything, the man from the country wants to hear the word “yes” from the lips of this other human being.

To feed this man’s insatiable hunger, it would not be enough to pass through a thousand gates, if at each one he would meet a person who would tell him, “no.” Without hearing a “yes” from someone who is not me, I am unable to give myself permission, even to live. The word “yes” represents an invitation. When we hear the word, “yes,” we also experience radical hospitality. To be met with “yes” means to receive acknowledgment, to be ratified as one who exists. “Yes” tells us that we belong, that we matter, and even that the other perceives us as something good.

The gatekeeper, however, never relents. His adamant refusal and the quenchless desire of the man from the country meet and balance one another like two curves that join and support one another at the top of an arch.

The man from the country tries to bribe the doorkeeper, who accepts everything without saying the word, “yes,” until the petitioner is left destitute. In wanting the man to think that he hasn’t omitted anything in his quest to pass through, the doorkeeper seems to personify the unrelenting way in which things let us down: our loves die, our talents fade or abandon us, our intelligence diminishes, our wealth never satisfies. We face one “no” after another and react much as the man from the country: by complaining, by appealing to the fleas on the collars of our desires, by spending our talent and resources. All of our attempts to feed or assuage our need are met with one “no” after another. We have all of us run this particular experiment under all kinds of conditions, controlling for millions of variables, each time with the same results.

The human dilemma we face when we recognize that our desires betray us could lead us to the conclusion that life is tragic. Returning to the word, “Law,” we can wonder whether Kafka’s parable illustrates the injustice of human reality. If we understand the Law to represent the genetic code that gives life meaning, structure, and the capacity to generate new forms, then this personal gate, provided only for me, signifies that life is not only tragic, but cruel.

And yet we sometimes meet people who seem not to experience life as something that is against them. For example, my grandmother, Lena Dougherty, lived her life as a gigantic “yes.” Somehow, someone must have said the word, “yes” to these people?

[This thread of this essay continues here] 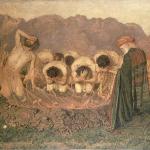 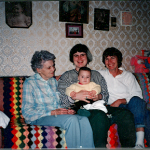 January 14, 2019 Open door(s)
Recent Comments
0 | Leave a Comment
Browse Our Archives
get the latest from
Catholic
Sign up for our newsletter
POPULAR AT PATHEOS Catholic
1

If Any Drug Tested on HEK-293...
Through Catholic Lenses
Related posts from Convivium Salon