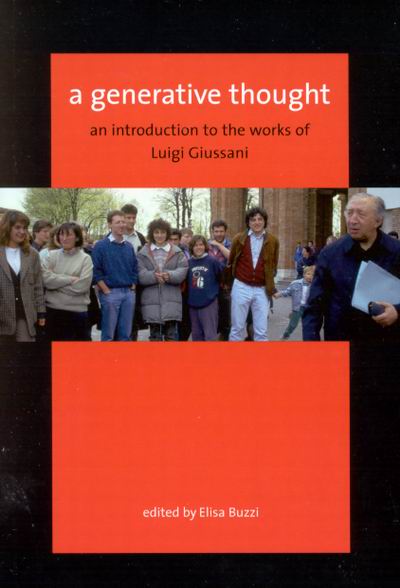 Originally published as, “Is the Pope Protestant? (On the Propes)”

I’d like to get back to the topic of ultramontanism I broached two days ago here. But before I do that, the answer to the question in the title of this post is “definitely maybe”…

Now during one of my many visits to Poland, this one about a decade ago, I picked up a newspaper from my grandmother’s nightstand. She always had a menagerie of stuff ranging from the latest news from forty years ago to the latest gossip from a few months ago with a few volumes of samizdat literature thrown in for good measure. You never knew what you’d find there. I have no idea how she kept it so well-stocked, or whether she meant to keep it well-stocked.

What I picked up was an issues of Gazeta Wyborcza, a leading center-left secular paper, probably still the best-selling newspaper in Poland. Just to give you an idea of the level of Polish theological literacy, the newspaper was founded by Adam MIchnik, a non-believing author of a book entitled The Church and the Left (which I’ve mentioned previously here in the Catholiclandia series). There really isn’t anyone comparable in the United States, perhaps the only notable exception is a foreigner like Terry Eagleton now that he teaches at Notre Dame (see his Reason, Faith, and Revolution: Reflections on the God Debate). Poland might not have polar bears outside of the zoos, but it’s really stranger than you think. 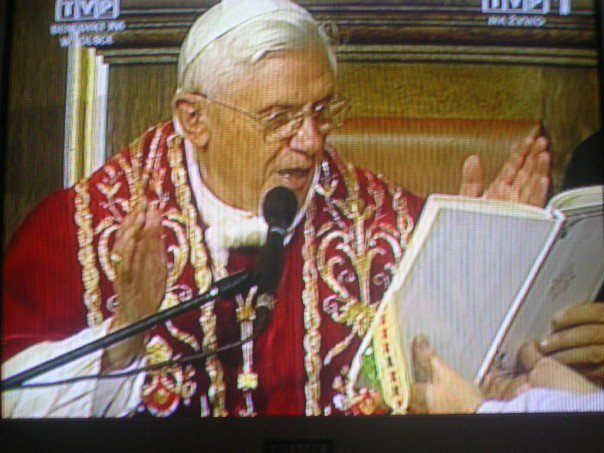 The first Protestant pope reading Polish on my grandma’s tv screen. Poland was the proud and peaceful home of the Radical Reformation (until the Jesuits came).

The article title and lead prognosticated that Benedict XVI’s reign was going to be the reign of the first Protestant pope. The notion of a “Protestant pope” freaked me out before I even started reading. I mean, what does it mean to be Protestant? Do Protestants even know? Try selling sola scriptura (even fides or gratia) to a Congregationalist, Episcopalian, Methodist, or even most Lutherans these days. Good luck.

I reflexively worried this would mean the elimination of the beauty, wonder, and intellectual richness of Catholicism (It turned out Benedict brought in too much of that for some). I also worried that the Mass would be replaced with Costco-style roadside chapels and pushy charismatic preachers who hog the service with their eisegeses of a multi-layered text–and no liturgy, no liturgy whatsoever. I was a lot younger then, so perhaps my understanding of Protestantism’s pluralism wasn’t terribly nuanced? Mea culpa.

The article itself advanced a vision of Benedict as someone who is mainly concerned with injecting a more personal and experiential appropriation of Christian beliefs and practices. This is a very minimalist definition of Protestantism, one probably more in line with the Radical Reformation, rather than the Magisterial Reformation (a.k.a. declining Mainline). 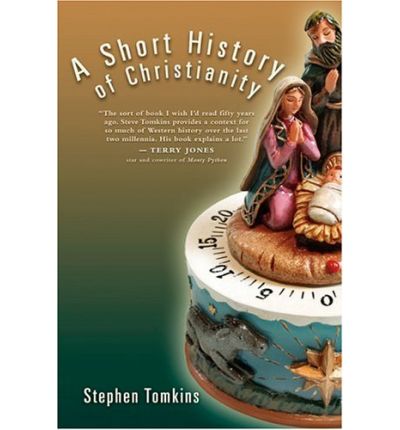 A Short History of Christianity is a rather funny and accurate take on Christianity until the author starts talking about mid to late 20th C. Catholicism.

About a year ago I recalled this article while reading A Short History of Christianity by Stephen Tomkins. He makes the obvious argument that the Reformation did not start as a breakaway movement, but as an attempt to reform from within. The way he frames this is striking. He comes to the conclusion that the Reformation was a failure because we now talk of a Reformation. In other words, the very existence of Protestantism is a sign of the Reformation’s failure to reform Catholicism. 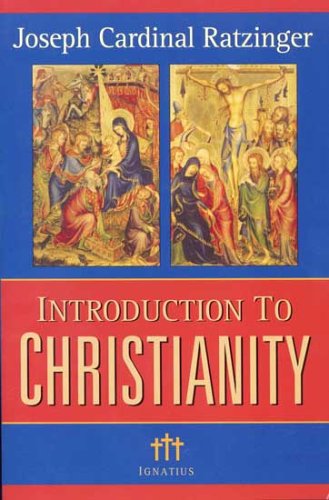 The future pope emeritus was already slipping Protestantism into your Catholic drink as early as this book.

There is something of what we usually think of as Protestant directness and emphasis on experience in the following statement:

“We should not allow our faith to be drained by too many discussions of multiple, minor details, but rather, should always keep our eyes in the first place on the greatness of Christianity.

I remember, when I used go to Germany in the 1980s and ’90s, that I was asked to give interviews and I always knew the questions in advance. They concerned the ordination of women, contraception, abortion and other such constantly recurring problems.

If we let ourselves be drawn into these discussions, the Church is then identified with certain commandments or prohibitions; we give the impression that we are moralists with a few somewhat antiquated convictions, and not even a hint of the true greatness of the faith appears. I therefore consider it essential always to highlight the greatness of our faith – a commitment from which we must not allow such situations to divert us.

In this perspective I would now like to continue by completing last Tuesday’s reflections and to stress once again: what matters above all is to tend one’s personal relationship with God, with that God who revealed himself to us in Christ.”

Benedict XVI’s stress upon a personal relationship with God that precedes and shapes (not to be confused with “obliterates”) the secondary commitments that flow from that relationship, is something that came through shockingly for many in the pope Francis interview of a few days ago. I guess they weren’t paying attention to his predecessor. 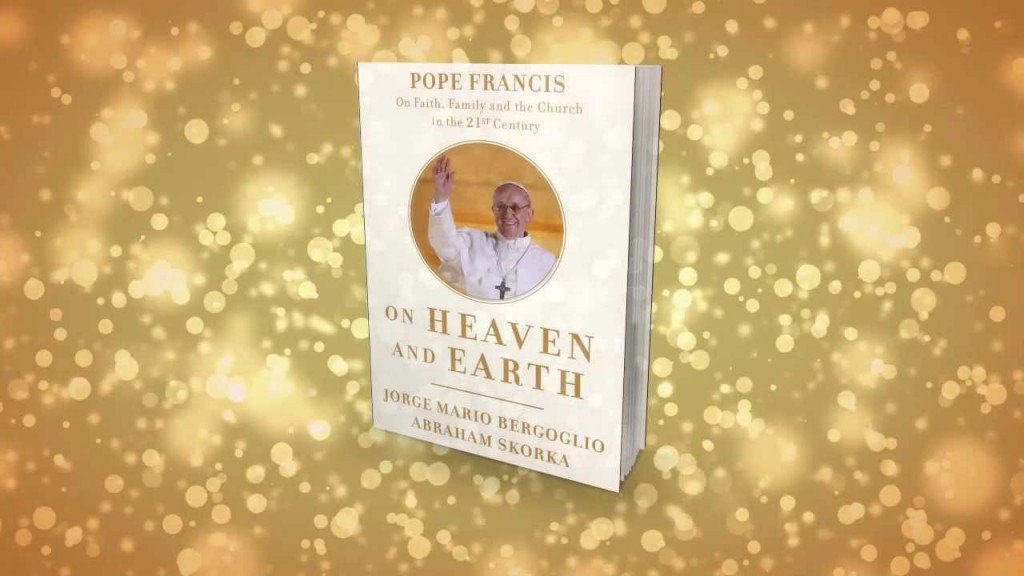 Making it rain: A lot of the pope’s sparkling personal commitment to encounter comes through in his only book in English. The dialogue with Rabbi Skorka, On Heaven and Earth.

One other thing the general reader might not notice is how much both the Benedict and Francis statements are loaded with the vocabulary of the Communion and Liberation movement. This should not come as a surprise, because popes since JP2 have shown a great deal of affection for the movement started by Luigi Giussani. So much so that the movement was in charge of the papal household under Benedict XVI. Cardinal Bergoglio was and remains a great supporter of the movement.  Before he became pope, he was frequently the point-man for introducing new CL books in South America.  As he puts it in A Generative Thought, his engagement with these promotions was a debt of gratitude for the insights he gleaned from his encounter with Giussani’s spirituality :

“Above all, I was expressing the gratitude that is due to Msgr. Giussani. For many years now, his writings have inspired me to be a better Christian, and I spoke at the presentation to bear witness to this. Msgr. Giussani is one of those unexpected gifts the Lord gave to our Church after Vatican II.”

Let me explain here there is an overlap between CL and Protestantism.

Before the Conclave there was much talk of possibly electing a pontiff from the United States. We might have him in the guise of Bergoglio, because of his ties with CL and ultimately American Protestantism.

I’m not trying to sell you some esoteric doctrines. Instead, I would like to point out that excessive talk about “encounter,”  “personal experience,” and “not moralizing” are (quasi-Protestant?) commonplaces of CL. If you go to a couple of CL meetings, hang out with the people, read Giussani’s trilogy The Religious Sense, At the Origin of the Christian Claim, and Why the Church? you’ll personally experience and encounter what I’m talking about here. They will also provide you with the keys to understanding the vocabulary and methods Francis uses. 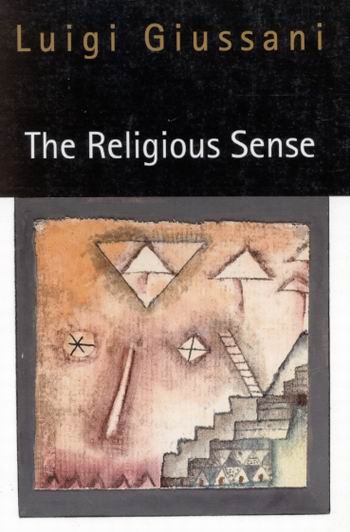 The Religious Sense is the place to start with Giussani. He’s an odd bird who does something like combining both Rahner and von Balthasar in his trilogy. I would explain but you should read this book along with the companion volumes At the Origin… and Why the Church?

You might ask yourself, “But what does this have to do with the Americans concretely?” Well, I’ve always been dimly aware that Giussani was greatly interested in American Protestant spirituality, especially the NIebuhrs. What I didn’t know is that he even wrote a book specifically about this topic, American Protestant Theology, which recently surfaced in English. For those of you in New York, there’s going to be a presentation of the book on October 2nd at the American Bible Society.

What I’m getting at here is that if you make the Giussani connection for both Benedict and Francis, plus their own independent engagement with Protestant religiosity, more intellectually for Benedict, more practically for Francis, then it might be fair to say that we’re on our second Protestant pope.

These are our “propes.” Depending on how much we want to emphasize the American connection through Giussani, we might even call them American “propes.” 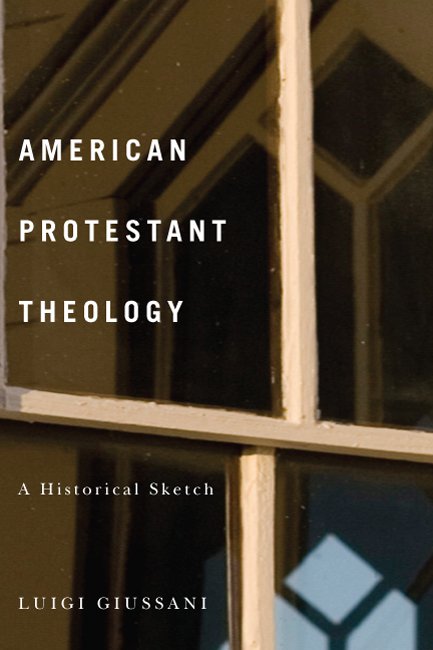 Surprise! I wasn’t expecting it either, or I forgot about it.